10 Best Bars in the South 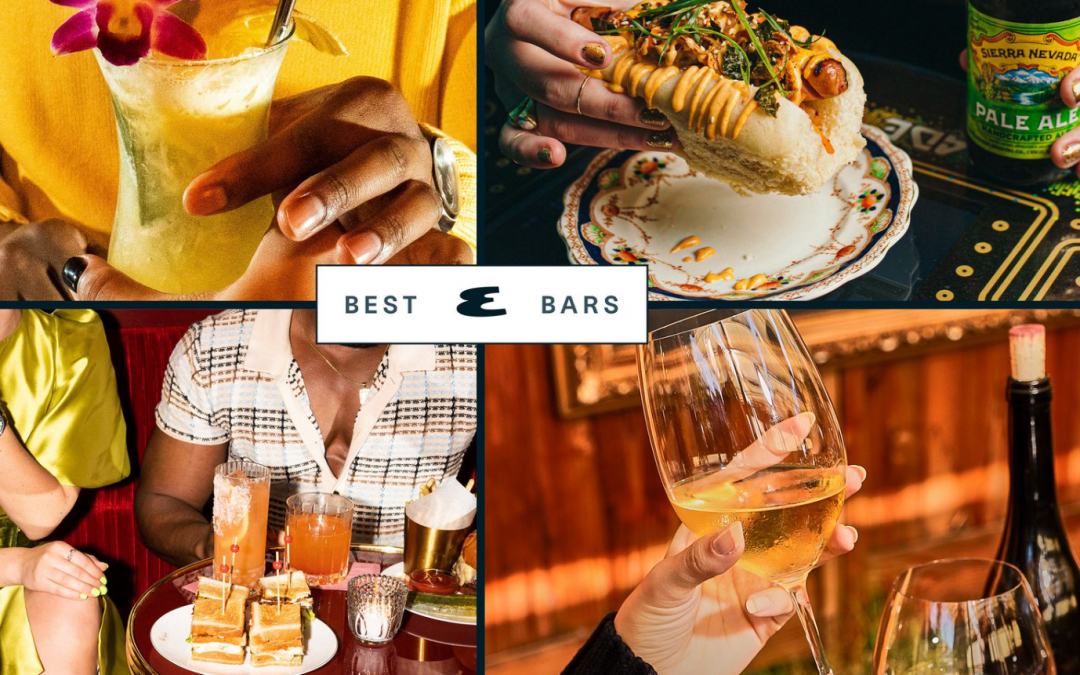 It may have been a while since you put on a pair of “nice pants” to go to a bar, but when that very 2022 confluence of joie de vivre and pandemic ennui begins to stir and you hear about a new piano bar with red booths or a semisecret room with Kubrick-level design details or a place that has the best damn Sazerac in the world, you put one leg in after the other and you order yourself a Lyft. Or, hell, hop on the next flight to New Orleans. It is time for the Big Night Out.

Drinking culture over the past two-plus years has morphed from negronis hastily made on your kitchen counter to cocktails on the go to cautiously rediscovering what it’s like to sit at a bar to where we are now—going out with a sense of epicness. “Wasn’t this supposed to happen last year, post-vax?” you might ask. It didn’t. Things went sideways. But we are happy to report, as per our last bar tab, which included a seafood tower and many martinis: The people want to party.

You’ll see proof of it in many of the new bars on this year’s list. They’re just a little more special. You don’t go there for the ’Gram. You may see someone in a white tux. You don’t just pop in for a drink after work. You go to feel like it’s your birthday even though it’s just a Tuesday.

Can you still simply get a drink in peace after a hard day? Yes. Always. We have bars for that purpose on this list, too. But should you find yourself eyeing those nice pants? Wear them. Text a friend or three. And go. —KEVIN SINTUMUANG 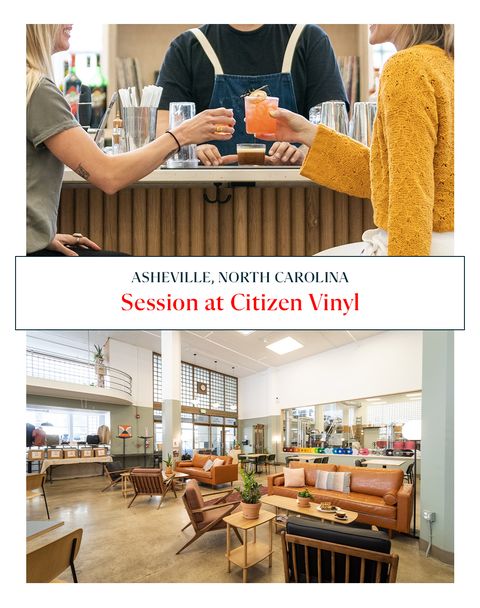 Let the record spin long enough and if you’re lucky, silence leads to a hidden track. So it is at the old CitizenTimes building, the home to Asheville’s biggest newspaper. After the printing operations moved to Greenville, South Carolina, the space was reborn in 2020 as a vinyl pressing plant, a record shop, and a very good bar called Session. You can watch blobs of vinyl smooshed into discs, then trimmed into perfect circles, while listening to the Daily Sides—curated playlists available in printed form on clipboards. On one molasses-slow Asheville afternoon, as light streamed through some of the twenty-thousand glass bricks, Lauryn Hill’s voice filled the air. A negroni sbagliato turned into a negroni sour, until the record was over and I sat happily at the undulating bar—or perhaps it was me who was undulating—waiting for the hidden track. 14 O’Henry Avenue —JOSHUA DAVID STEIN 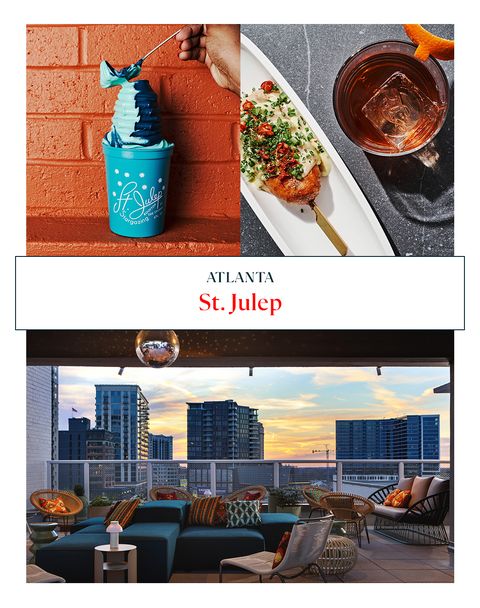 On a rooftop high over Atlanta, a DJ is spinning records in the corner and you are consuming boozy soft-serve ice cream. The perfect food pairing for your tequila-mango cone? A flight of house-made corn dogs. St. Julep’s breezy indoor-outdoor space has both a bar area with sorbet-hued barstools and several lounge sections with chaises where friends can chill and take in the view. True to its Buckhead roots planted nine floors below, St. Julep also offers a bevy of Outkast-themed drinks, such as the Bowtie, the 13th Floor, and the Ms. Jackson—this last one like a Big Gulp for big kids, with Tito’s, cherry Heering, hibiscus, and lime. Can I get a “Hey Ya!”? 374 East Paces Ferry Road NE —BETH ANN FENNELLY 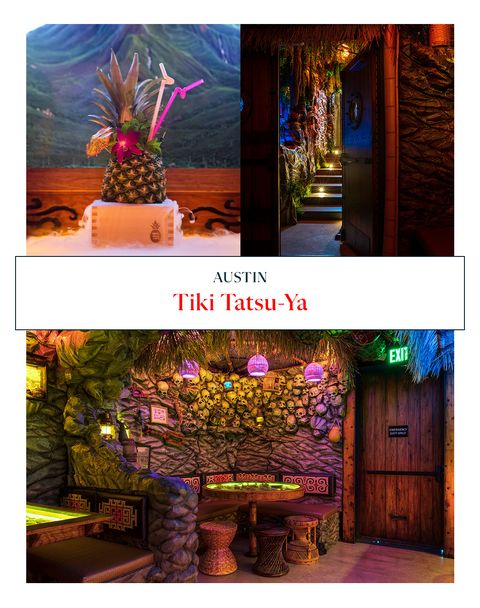 Ladies and gentlemen, I have met the most perfect server on this side of the Rio Grande. Her name is Feliza Bustos, and if you’re lucky she’ll be the one carrying out a glowing fishbowl full of gin, lemongrass shochu, and star fruit as the lights begin to flash and dramatic music plays at this maximalist tiki bar in Texas. She sways and twirls like a TGIF waitress on acid before ultimately placing the drink down. Perhaps I am simply verklempt at the sensory overload. Every inch of the wall is taken over by grimacing deities. The tiki drinks on the lavishly illustrated menu are assiduously sourced and served in mugs that are vessels the same way a parade float is a method of conveyance. Feliza delivers my Forbidden Grog in a pale-green seahorse. Inside, the rum runs wild, cavorting with banana, fig, honey, and more. Seahorses are great fathers, I begin to say, but before she can hear more of my Hippocampus trivia, Feliza is off, twirling into the night. 1300 South Lamar Boulevard —J. D. S. 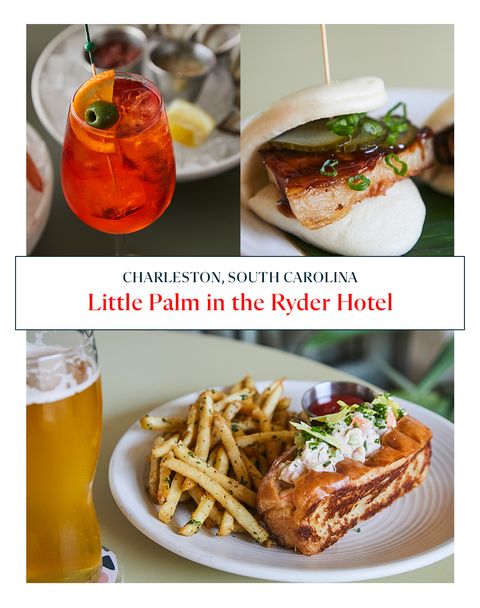 “Have you been to Little Palm yet?” asked the kind man shucking oysters at my chosen local establishment on my first evening in town. It was advice I fielded near every day up until I finally made it to the indoor/outdoor craft-cocktail haven—they call it a “swim club” due to its proximity (~ten feet) to the pool—at the Ryder Hotel. Little Palm is like nothing nearby. Motown fills the air as brightly colored boozy concoctions litter the bar. Daybeds fill. Diner banquettes buzz. A curious crowd gathers nightly: in-the-know locals, blissed-out hotel guests, and industry workers who just cut shift. Women in clacking heels. Men in suits. Families desperate for respite after sightseeing adventures. First dates. Me. My mom. Everyone, in other words. You should, too. 237 Meeting Street —MADISON VAIN 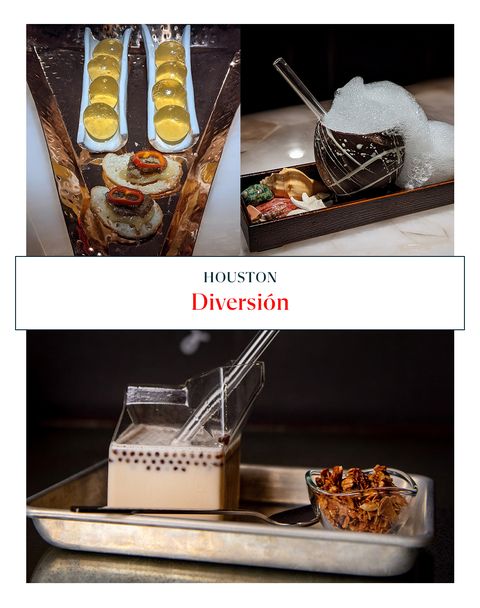 Houston is a city with zero chill. When people go out, they get dolled up. When they eat, they feast. When they drink, oh brother, wahoo. Diversión, the cocktail bar next to Degust (one of our 2021 Best New Restaurants), doesn’t play it cool either, which is . . . cool. The low-slung brick building is a bar kitchen, stocked with more flasks and equipment than a Pfizer lab. Flagons of tinctures, ferments, vinegars, and shrubs line the wall. The bar chefs—led by Steven Enrique Salazar—click on a spotlight when they serve you a drink, and the drinks deserve such lighting. The Night at the Movies is a concoction of Sercial Madeira and cognac with citrus bitters, accompanied by an Android tablet playing a Charlie Chaplin flick. It’s a bit de trop. For the slightly more nonchalant, choose from the farm-to-table cocktails. Many of the ingredients are sourced from the bar’s own two five-thousand-square-foot farms. 7202 Long Point Road —J. D. S. 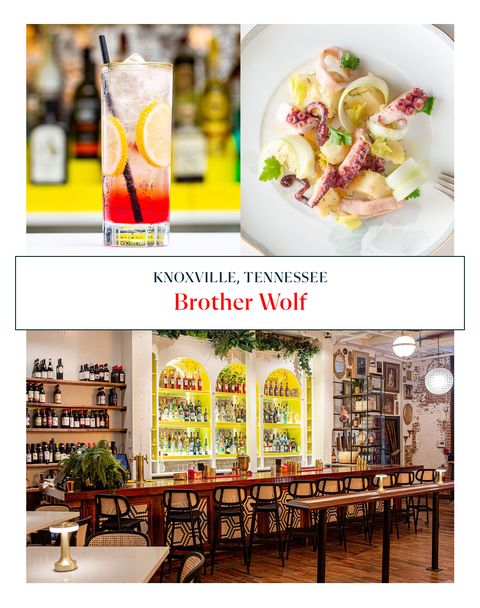 Bitters flow in bright-red ribbons, glow in backlight, and spill into the starlit night from Brother Wolf, an amaro-centric bar near the old train depot in Knoxville. It’s not that big a city, and bitters are still a bit niche, so chances are you’ll run into someone you know. And you might lean, elbows on the drink rail, peering at the red, yellow, and black pages attached to a brass clipboard that constitute the menu and marveling at the range of amari. And you’ll probably order a very good drink, like a negroni bianco (made with gin from up the road and Baglio Baiata Alagna bianco from Sicily) or an Il Professore (made with Fernet and Montenegro), and maybe even bum a Parliament and smoke it outside and run into the owners, Aaron Thompson and his wife, Jessica King, and their two Great Pyrenees, Moose and Badger, and their daughter, Stella, namesake of the adjoining Osteria Stella. 108 West Jackson Avenue —J. D. S. 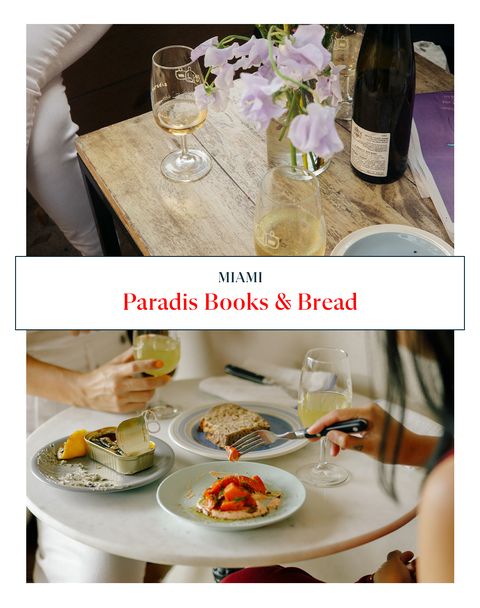 The buzz surrounding the number of global restaurant brands setting their sights on Miami can obscure another boom: a flourishing independent food-and-wine scene. Paradis Books & Bread, a breezy natural wine bar and radical bookstore in North Miami, has emerged as a key member of this new school. Inside on a normal afternoon, regulars meet up to trade notes on their readings while the team puts out small plates whose recipes, co-owner and sommelier Bianca Sanon proudly admits, are mostly stolen from cherished sources like the Apartamento Cookbook. Few items cost more than ten bucks. Outside under the palm trees, people drink from a bottle list that could give most places in Paris’s 11th a run for their money. 12831 West Dixie Highway, North Miami —GABE ULLA 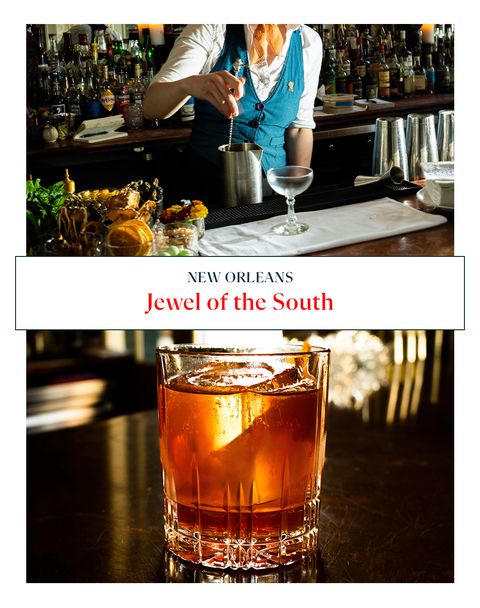 Bartender Chris Hannah is one of the pillars of cocktail culture and knowledge in New Orleans, and thus a national treasure. He holds court behind the bar here, in this lovely cottage on one of the quieter streets in the French Quarter, making what are arguably the best cocktails in this town, and thus America. You will have the very best Sazerac here. The very best French 75. And several other obscure historic concoctions he’s dusted off, as well as sublime new creations. You will come for the drinks, but the decadent foods—Wagyu tongue, sweetbreads, caviar—will have you staying for extra rounds. 1026 St. Louis Street —K. S. 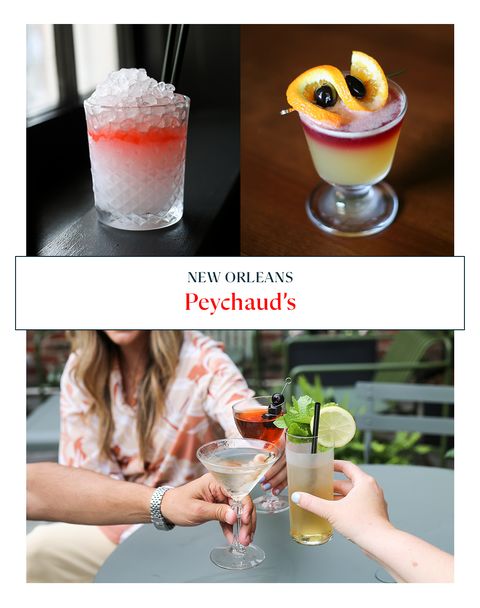 While this bar opened in the middle of the pandemic, you wouldn’t be able to tell given the name or locale of the place. That’s because, as in so much of NOLA, its history runs deep. This building was the home of Antoine Peychaud, whose namesake bitters are the key ingredient to the granddaddy of NOLA cocktails, the Sazerac. You will get an excellent one of those here at the hands of barman Nick Jarrett, but the pro move is to head to the courtyard in the back and order the Peychaud’s Fizz, a refreshing aperitivo that will stave off the humidity in the Quarter. 727 Toulouse Street —K. S. 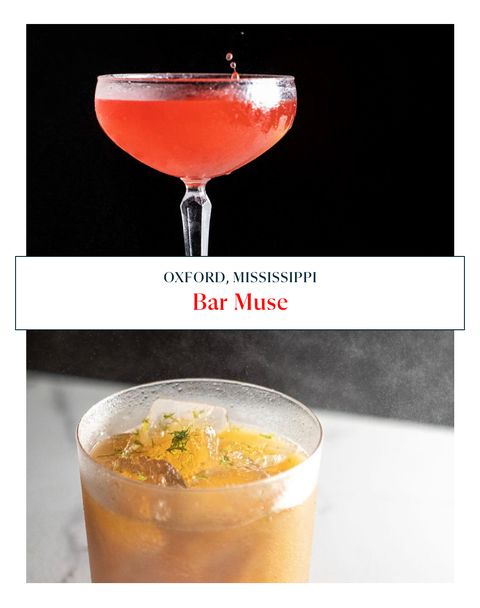 This little speakeasy, entered through an unmarked door off a brick alley, clocks in at a mere 264 square feet, yet that’s enough space for cocktail wizard and co-owner Joe Stinchcomb to work his alchemy. The frequently changing craft cocktails often reference Black history or culture, whether that means Nina Simone or The Boondocks. HBO’s The Wire was celebrated with six stunners, including the Omar Comin’. Corianderinfused Scotch whisky captured the fierce masculinity Michael K. Williams brought to his character, but flavors of mango, ginger, lime, and cardamom reflected the complexity of the Omar who tenderly kissed his boyfriend, shopped in his pj’s, and took his grandmother to church. The Wire can be rewatched on HBO, but there’s no resurrection for the Omar Comin’: Stinchcomb gets bored after a few weeks and retires his menus. If you want to keep pace with his newest obsessions, you’ll just have to drink there more often. 1006 Van Buren Avenue —B. A. F.