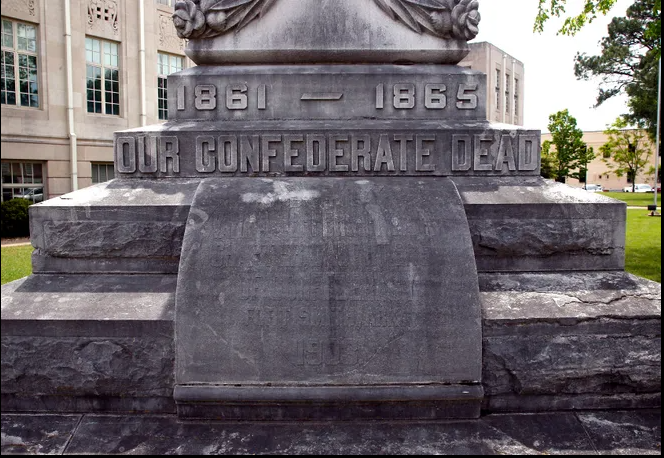 Talk surrounding moving the Confederate monument on the Sebastian County Courthouse lawn has stalled, leaving the statue in place.

County Judge David Hudson said a plan to relocate the statue would have to appease all the involved parties, but the discussion never reached that point.

The Arkansas legislature further halted any proposals to move the statue when it passed the Historical Monument Protection Act in 2021. The law bans removing a monument from its location without a waiver from the Arkansas History Commission.

Fort Smith lawyer Joey McCutchen represents the local United Daughters of the Confederacy chapter, which erected the statue in 1903.

McCutchen testified in favor of the new law and said it is “a strong law that protects our history.”

McCutchen said the monument is important because it acknowledges the Confederate history in Fort Smith. 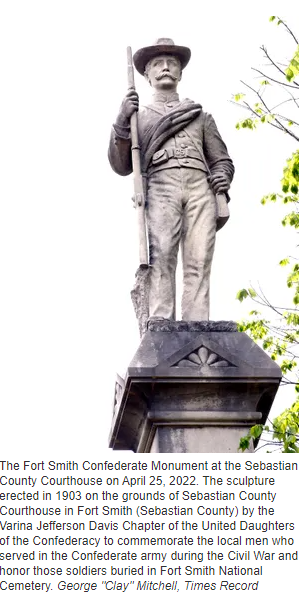 “It honors those who gave their lives,” McCutchen said. “It honors people like my great-great-grandfather, and my heritage, who was a civil war veteran.”

For others, the monument is a painful reminder of a war fought to enforce slavery.

“It’s seen as a racist symbol,” said Debi Council, the chairwoman of the Sebastian County Democrats.

Evan Rothera, an assistant professor of history at the University of Arkansas at Fort Smith, spoke about how the statue might impact different subsets of people.

“You know I am not African American myself, but I often think what would it be like for me if I was African American to have to walk by a statue and see this commemorating people who fought perhaps to keep perhaps my ancestors in chains or certainly they fought to keep 4 million people in chattel bondage?” Rothera said.

He added that some people mistakenly claim that the statue has nothing to do with race.

“The confederacy, Alexander Stephens said, was founded on one principle and that is that Black people were not equal to white people,” Rothera said. “The Confederates left the Union to save slavery, so a Confederate soldier might not own slaves, but it could still be fighting for slavery, so a lot of people, you know, they’ll look at it that way. They’ll have kind of a visceral reaction because of sort of a misunderstanding of why people were fighting, and so then you know that could lead them to other misunderstandings, ‘Well this statue shouldn’t be taken down because it doesn’t have anything to say about race,’ when in fact it does. It has a lot.”

The statue became a hot-button issue following George Floyd’s death and the protests that took place across the nation in reaction to police brutality.

For Ferstl it is important to keep the statue where it is.

“I mean a lot of people here in town have relatives that were in that war on both sides,” Ferstl said. “The thing’s been sitting there for how many years now? It’s not bothering anything other than people that get butt hurt over every little thing.”

“People don’t need to see signs of racism and anger and hatred,” Council said. She later added, “That war was so many years ago, and we need to move on and get back to being neighbors. I think there’s too much anger and hatred in the world today.”

McCutchen pointed to Bentonville’s move to relocate a Confederate statue that was originally on the Bentonville square as an example of how to handle such issues. Officials moved the Bentonville statue in September 2020. It will be relocated to James H. Berry Park.

“The importance of that is monument after monument, have across this nation because of the cancel culture, have lost their historical designation,” McCutchen said. “The Bentonville monument Confederate monument that was on the square in Bentonville, which will shortly there will be a groundbreaking for a multimillion-dollar private park where that monument will be located, that’s a classic example of doing it the right way and following rules.”