A Grave Dilemma: When Remains Are Part of a Monument 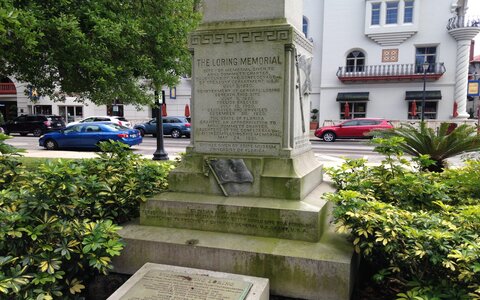 As in the rest of the country, things are starting to heat up in America’s oldest city when it comes to Confederate monuments. Similar to Lt. General Ambrose P. Hill’s monument and gravesite, Major General William W. Loring’s burial site in St. Augustine, Florida, is under fire because of its prominent location in the city’s Plaza de la Constitucion. If you think the Hill situation is complicated, you’re in for a real treat. 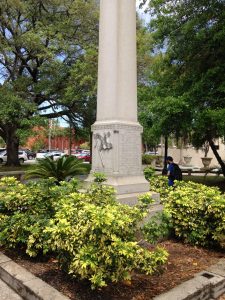 On June 22, St. Augustine’s city commission decided after a 3-2 vote to remove a memorial dedicated to fallen Confederate soldiers located in St. Augustine’s Plaza de la Constitución since 1879. Hundreds gathered eight days before and called for the monument’s removal because of its ties to the Confederacy. During the 12-hour meeting, the commissioners discussed how to best handle its relocation. The city manager provided a written proposal. Notably left out of the commission’s discussion was the nearby Loring Memorial, which is maintained by the University of Florida and owned but the state. However, on June 25, the University of Florida announced it’s working to remove it as well.[1]

Most secondary accounts state that Loring was cremated before his burial. (I haven’t found any reliable primary source evidence to confirm this.)Loring’s remains, unlike A.P. Hill’s, are deposited under the monument instead of inside of it. The obelisk marking his grave is located in a park situated on the west side of the Governor’s House Cultural Center.

Relocation of the Loring Memorial came up as a topic of discussion once before in 2018. Some called for the removal of both the obelisk and Loring’s body, while one professor from Flagler College recommended leaving Loring’s remains where they were and marking the gravesite with a simple headstone.

When a direct descendant of General Loring living in Boston, Massachusetts, caught wind of this attempt, he sent a letter opposing the relocation.[2]

While Loring did serve the Confederacy, his proudest achievements took place before and after the Civil War. He gave his left arm for his country during the Mexican War after it was shattered by a musket ball in September 1847. The surgeon who removed the limb, Assistant Surgeon Henry H. Steiner, later noted that Loring underwent the procedure without chloroform, calmly puffing away at his cigar. Steiner said Loring demonstrated a “magnificent exhibition of nerve and soul defiance” that he had never witnessed before.

Loring was brevetted colonel for his gallant conduct during the war. He was an active member of the Aztec Club, which included both former Union and Confederate officers who fought during the Mexican War, such as Winfield Scott Hancock and Ulysses S. Grant, who served as president of the organization for a time.[3]

After the Civil War ended, Loring represented the United States when he traveled to Egypt to serve as an inspector general to Khedive Ismail Pasha in December 1869. The other Americans who did the same, both former Union and Confederate officers, were paid the same as if they were employed in the United States Army, and if disabled, were guaranteed severance pay from the American government.

“Loring Pasha” published a book on his experiences in Egypt in 1884. He is arguably best remembered for his decade of service there (double the time he spent fighting for the Confederacy). His service for three countries is displayed on his memorial — which includes embossed United States, Confederate, and Egyptian flags.[4]

Loring’s time in a gray uniform wasn’t something he necessarily liked to dwell on, either. During a visit to St. Augustine in 1880, author, educator, and veteran officer of the 81st New York Regiment during the American Civil War Joel Dorman Steele, noted that Loring was “reticent” when it came to talking about his service during the late war. He recalled once instance “the other day there was referenced made to it by some gentlemen, he incontinently disappeared.”[5]

While living in New York in December 1886, where he had resided for decades, Loring came down with pneumonia. He died within 18 hours of falling ill. His body lay in state at the St. Denis Hotel so that his old comrades and friends were able to view it until the funeral was held at the Episcopal Church on January 3, 1887. Escorted by numerous former Union and Confederate officers acting as pallbearers, including Brevet Brigadier General George W. Schofield (brother of Major General John M. Schofield), Brigadier General Roger A. Pryor, Major General Gustavus W. Smith, Major General Charles P. Stone, Major General Rufus Ingalls, Brevet Major General Martin T. McMahon, Brigadier General Thomas P. Dockery, Major General Cadmus M. Wilcox, and others, the coffin, draped in black cloth and decorated with numerous floral arrangements, was transported to Marble Cemetery and temporarily placed in a vault. Plans were made to move Loring’s remains to St. Augustine, Florida, in the spring.[6]

On March 17, 1887, Loring’s body arrived at St. Augustine accompanied by former Alabama senator and Union brevet brigadier general during the Civil War George E. Spencer, his wife May, Loring’s niece, the Reverend John J. Riordan, the rector of the Irish Emigrants’ Mission at Castle Garden, and New Yorker Albert A. Nunez, his brother-in-law. Loring’s casket laid in state in the west end of the old slave market building in the Plaza de la Constitución.

The casket was covered with black, wrapped in the American flag, and flowers were strewn across it. These were arranged in wreaths, crosses, and other designs. On top of the casket rested Loring’s swords.

The market building, the gates of the park, and the monuments of the park were draped in mourning to honor the occasion, as were the public buildings and private residences along streets leading to Evergreen Cemetery.

At noon on March 19, Loring’s casket was placed on a gun carriage pulled by four horses and taken to the cemetery about a mile and a half from the plaza. It had been established the year before outside of the city limits.

The pallbearers included prominent former Union and Confederate officers Lt. General Edmund Kirby Smith and Brevet Major General Romeyn B. Ayers, the former governor of Florida, George F. Drew, and 13 others. The casket was buried in a lot surrounded by pines and palmettos, deeded to the family by St. Augustine’s city council.

During the reading of the service by former Confederate chaplain and bishop of the Episcopal Diocese of Tennessee, Charles T. Quintard, Loring’s scabbard and sword were broken and tossed into the grave as citizens, Civil War veterans, and the military escort huddled around in a square.[7]

But like his counterpart in gray, General A.P. Hill, Loring remains were not left undisturbed after his second funeral.

Twenty-one years after his burial at Evergreen, the Anna Dummett Chapter, Daughters of the Confederacy, and the General Loring Chapter, Children of the Confederacy, discovered his grave “desolate and neglected outside the enclosure of Evergreen Cemetery, St. John County, unmarked, overgrown, tramped by stock and frequently blackened by fire,” and so they “voluntarily undertook the care of it, enclosed, kept a fire break clear around it, and kept it in order for eleven years, at their own expense.”

But realizing the “impossibility of giving adequate honor and protection to the grave,” they received consent from his next of kin and the city of St. Augustine to remove his remains to a suitable place within the city.

On July 3, 1920, the U.S. Treasury Department granted a 15-foot patch of land located in the city (now Loring Park). Loring’s remains at Evergreen were disinterred, identified, and reinterred on July 6, 1920. A granite obelisk, resting on three bases and standing 25 feet high, was erected over the new gravesite on July 13, 1920, at the cost of $1,225. The Loring Memorial was dedicated on December 30, 1920, the 34th anniversary of the general’s death. The Florida Legislature passed a bill on June 14, 1921, appropriating another $2,000 to cover the expense of the curbing, railing, and concrete work around its base.[8]

Evergreen Cemetery seems to be the most logical site to locate Loring’s remains if the University of Florida, UF Historic St. Augustine Inc., or the state decides to move them for a third time — which will likely happen. It was the original location where Loring was buried until the Anna Dummett and General Loring Chapters relocated them to the busy plaza — hence the current dilemma. It’s also worth mentioning that Loring’s niece is buried at Evergreen. She changed her name from May Spencer to William Loring Spencer, demonstrating her fondness for Uncle William. Maybe it would best to place him beside her.

I’ll reiterate what I stated in the Hill post: I’m far less concerned with the fate of Loring’s obelisk than I am with his remains. If the University of Florida decides to move them, I have one piece of advice: Get it right. Let’s allow this soldier to rest in peace and not disturb his remains again. I would be willing to help with hammering out these details (free of charge).

I’ll leave you with this quote that came directly from Loring’s best work — A Confederate Soldier in Egypt — published a couple of years before his death: “[I]n no relation of life can we learn the hopes and fears of a people so well as in the manner of disposing of the dead.”[9]

[4] James A. Morgan III, “Searching for Redemption in the Deserts of Egypt,” Civil War Times (February 2007), https://www.historynet.com/searching-redemption-deserts-egypt.htm; William B. Hesseltine and Hazel C. Wolf, The Blue and the Gray on the Nile (Chicago: University of Chicago Press, 1961); William W. Loring, A Confederate Soldier in Egypt (New York: Dodd, Mead & Co., 1884).

A native of Cleveland, Ohio, Frank Jastrzembski studied history at John Carroll University (B.A.) and Cleveland State University (M.A.). He’s written dozens of articles and two books on Victorian officers. Visit www.frankjastrzembski.com to view a complete list of his publications. When he is not writing, he travels with his wife, explores old cemeteries, plays wargames, and hunts for vintage military and political memorabilia.