Amid Monument Wars, A Rally For ‘More History’ 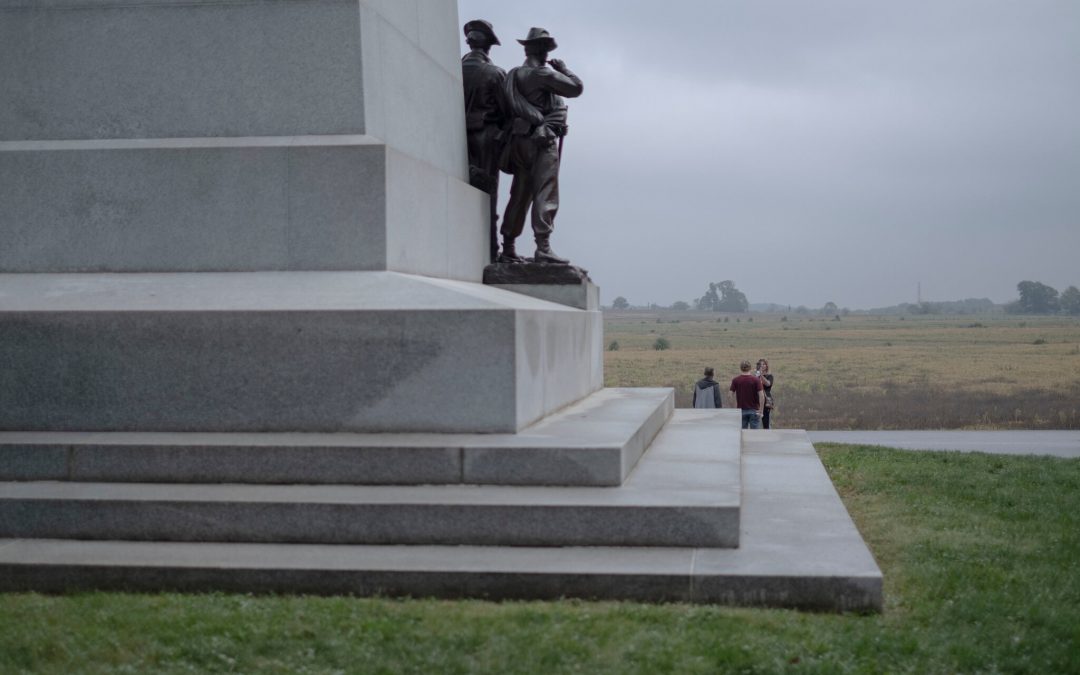 On Saturday, a group of about 30 mustered under drizzly skies at the edge of the battlefield at Gettysburg, Pa. The site of one of the bloodiest and most important battles of the Civil War, Gettysburg has seen its share of clashes over the memory of the war in recent years. But this group was there to make a stand of a different kind.

They carried signs with quotations from 19th-century newspapers, passages from the Confederacy’s constitution extolling slavery, and facts (some of them footnoted) about Robert E. Lee’s treatment of his human property. Some in the group wore T-shirts emblazoned with a social media-ready battle cry: #wewantmorehistory.

Scott Hancock, a professor of history at Gettysburg College, urged the group to be “polite” to anyone who challenged them and reminded them they were not at a protest — or not exactly.

“Our job is to do something a bit more constructive by telling a fuller story,” he said.

The group was part of a “Call to Action” organized by the Journal of the Civil War Era, a scholarly publication. For two hours on Saturday, at about a dozen Civil War-related sites across the country, from New York to Nashville to St. Louis, historians simultaneously gathered with signs highlighting distortions in existing plaques and memorials, or things that simply weren’t being spoken of at all.

The idea was to move beyond binary debates about problematic monuments — tear down or keep? — and instead emphasize the inaccuracies and omissions of the existing commemorative landscape, including the erasure of Black history.

“Historians have different views on taking down statues,” said Gregory Downs, a professor at the University of California, Davis, and one of the organizers. “But that debate doesn’t really capture what historians do, which is to bring more history.”

The action was roughly timed to the anniversary of Lincoln’s issuing the preliminary Emancipation Proclamation, on Sept., 22, 1862, which widened the purpose of the war to include ending slavery, as well as preserving the Union.

But Saturday’s event also comes at a moment when the battle over Civil War memory — and the telling of American history more generally — has intensified, with seemingly no end in sight.

Since the George Floyd protests this summer, a growing number of Confederate monuments have come down across the country. At the same time, defenders have rallied to protect them against assault, real and imagined; here in Gettysburg, hundreds of militia members and others, some heavily armed, gathered on July 4 to guard the site against a rumored invasion by antifa flag-burners that turned out to be a Twitter hoax.

Meanwhile, President Trump has made history a campaign issue. Speaking this month at what was billed as the first White House Conference on American History, he called for a return to “patriotic education” — an appeal that drew sharp criticism from the American Historical Association and 28 other scholarly groups.

If the rhetorical temperature on Saturday was lower, that was the point. The event was billed as a “demonstration of good history” — “demonstration” in the sense not of protest, but of proof.

“We’re trying to poke holes in Lost Cause mythology, to show how it’s inaccurate,” said Kate Masur, a professor at Northwestern, referring to the depiction of the Confederate cause as a noble and just one. Prof. Masur, who coedits the journal with Prof. Downs, explained that they “want to add to history, by showing more of the African-American history that has been erased.”

The event was inspired by the work of Prof. Hancock. Starting in 2015, when the murder of nine churchgoers in Charleston by a white supremacist intensified debates about the Confederate flag, he began making regular visits to the battlefield’s monuments carrying simple homemade signs that provided missing context about race and slavery and delved into the flag’s history as a white supremacist symbol.

Prof. Hancock was there on July 4, when the armed counter-demonstrators came, ready to do battle with antifa. He said he was used to intense conversations with park visitors skeptical of his message. “But it was not a hostile atmosphere until this July 4,” he said.

The Eternal Light Peace Memorial, where Prof. Hancock’s group gathered on Saturday, commemorates the 50th reunion encampment of 1913, itself a signal event in the effort to recast the conflict as a tragic battle between brothers. Their signs were intended to point out the centrality of slavery to the war, a fact that Prof. Hancock said goes largely unmentioned on the site’s many monuments.

One sign quoted from the Charleston Mercury in 1862: “As a people, we are fighting to maintain the heaven-ordained supremacy of the white man over the inferior or colored race.” Another noted that roughly 31 percent of white households across the 11 Confederate states had owned slaves.

Prof. Downs wore a sign around his neck noting that Robert E. Lee “whipped his slaves hard,” and quoting one slave who called him “the meanest man I ever saw” — a riposte to those today who paint Lee as a kindly or reluctant slave owner.

“Learn your history — all of it,” one sign exhorted. “What are we afraid of?”

In 2008, the National Park Service overhauled the Gettysburg Museum and Visitor Center to add discussion of slavery, making its centrality to the war clear. And Prof. Hancock said the Park Service had done “good work” presenting interpretive material relating to African-Americans present at Gettysburg, including at two homesites.

The battlefield’s superintendent, Steven Sims, said in a telephone interview that the Park Service was still in the process of adding more context regarding slavery on the battlefield itself. But near the Virginia Monument, a re-enactor who gave his name as “Rebel Rich” said he saw no reason to mention slavery there.

“That statue is here to represent where Lee stood when he watched 12,500 men cross that field,” said the re-enactor, 68, who wore a battle uniform and carried a Confederate flag. “When those young boys crossed that field, they didn’t know anything about the slavery part. They were fighting for their land rights.”

The signs marked the site of the Colored Orphans Asylum, which was burned to the ground by a white mob.Credit…Simbarashe Cha for The New York Times

Historical erasure is not limited to the South, a fact the event on Saturday underlined. In New York, LeeAnna Keith, a historian and high school teacher, stood near the corner of Fifth Avenue and 43rd Street, where she had pasted hand-lettered signs about the 1863 Civil War draft riots.

The weeklong violence began when white mobs erupted in protest over the draft, but quickly turned into an assault on the city’s Black citizens. On the first day, a mob attacked the Colored Orphans Asylum, which once stood at the corner where Dr. Keith posted her signs (now an empty lot), burning it to the ground.

The riots were finally quelled with help from federal troops redirected from Gettysburg, where the battle had taken place just two weeks before. One of Dr. Keith’s signs listed the casualties: 11 Black men lynched, more than 100 rioters killed and some 2,000 Black residents driven from the city.

The New York draft riots were the deadliest urban disturbance in American history, and a forerunner of better-known racist massacres like those in Colfax, La., in 1873, or Tulsa in 1921. But the city does not have a single plaque or marker commemorating the event, Dr. Keith said.

“White rioting is a major factor in American history,” Dr. Keith explained. “But we so often mislabel it, or don’t remember it at all.”

In Chicago, Prof. Masur was at “Confederate Mound,” a monument in Oak Woods Cemetery, on the South Side. “This monument was a white supremacist project,” one of her hand-lettered signs read.

In an image posted to Twitter, it was propped up against the official plaque, which makes no mention of slavery.

The monument marks the burial site of some of the 4,000 Confederate soldiers who died at Camp Douglas, a Union prisoner-of-war camp on Chicago’s South Side. The dedication of the monument in 1895 drew 100,000 people and, one of Prof. Masur’s signs pointed out, featured a speech by Wade Hampton III, who was a Confederate officer and, after the war, a leader of the Red Shirts, a white supremacist militia that violently suppressed the Black vote. In his address, he lamented how “the best blood of the country” — North and South — had been “poured out like water on many a battlefield.”

The contributions of Black Civil War soldiers, Prof. Masur said, receive very little memorialization, even in the North. At some other sites on Saturday, participants highlighted the ways Black Americans had held their own commemorations.

In Elizabeth City, N.C., a city of about 20,000 in the northeast corner of the state, a group organized by Hilary Green, an associate professor from the University of Alabama, gathered on the waterfront near Albemarle Sound, at a site where African-Americans had held Emancipation Day parades for decades following the war.

As in Gettysburg and Chicago, the signs historians brought emphasized facts and primary sources. One reproduced newspaper articles from the 1880s and ’90s describing parades and speeches. Another highlighted an 1898 Grand Army of the Republic encampment at the county courthouse in Elizabeth City, which brought together Black and white veterans in the area who had fought on the Union side.

“North Carolina was a complex state,” Prof. Green, who helped coordinate the national event, said by telephone. “Not everyone believed in the Southern cause.”

This summer, the City Council narrowly voted to move from the front of its courthouse a Confederate monument that was dedicated in 1911, during the high point of Confederate commemoration across the country. But Prof. Green emphasized that Saturday’s event was about adding, not subtracting.

“We really want more history,” she said. “Our commemorative landscape erases so much.”