Just in time for the fall travel season, the American Battlefield Trust is deploying a smartphone app that will help heritage travelers explore the nation’s Civil War battlefields and understand the fighting that transpired on them. 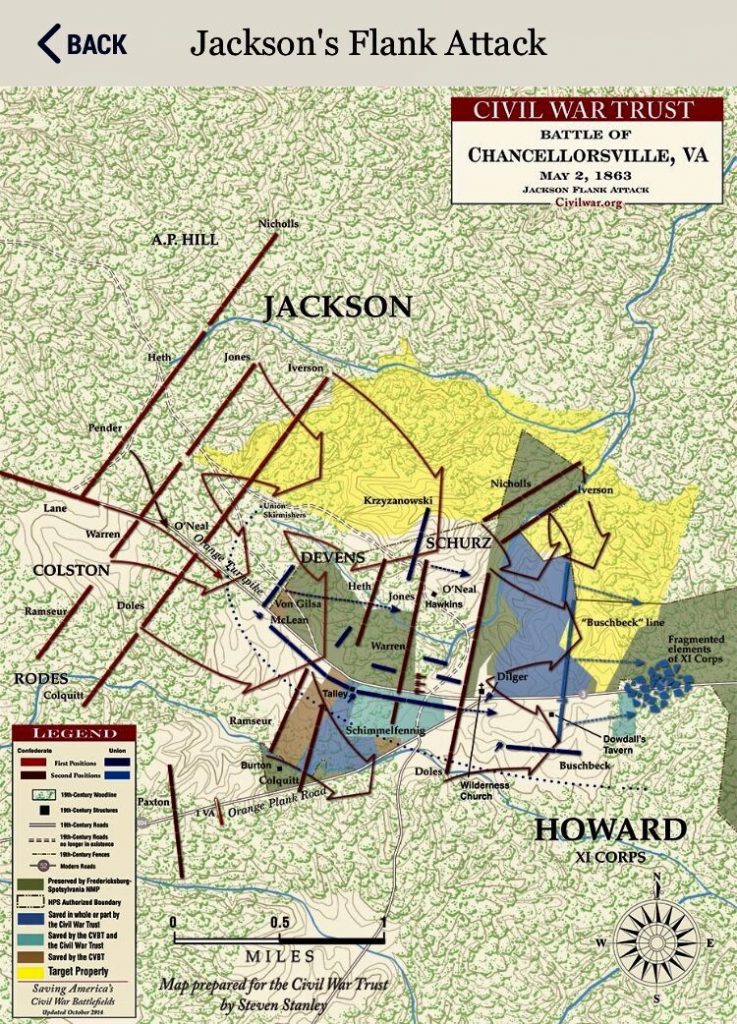 A map and details of Jackson’s flank attack at Chancellorsville are outlined in the new app.

The Trust’s Civil War Battle Maps application includes more than 100 maps created by the Trust’s veteran cartographer, Steve Stanley, showing military maneuvers on the war’s best-known battlegrounds. Whether it’s Chickamauga, Shiloh, Appomattox or another Civil War site, each place was made famous by the momentous events that once took place on these now-tranquil landscapes.

Developed for the Trust by Neotreks Inc. of Castle Rock, Colo., the GPS-enabled app allows users to follow each battle’s action from the comfort of their living room, or while walking or hiking across historic ground. Its collection covers 83 battlefields in 142 maps, from Gettysburg in Pennsylvania to Glorieta Pass in New Mexico. More complex battles, such as Gettysburg, have multiple maps to explain the fighting as it unfolded across sometimes expansive terrain.

“This new digital resource is like having an atlas in your pocket, chock-full of detailed and well-researched maps of the nation’s most important Civil War battlefields,” said Trust President James Lighthizer. “The Battle Maps app helps people visualize where soldiers were and how they moved, orients visitors to the field, gives them a sense of the action, and links them to other resources to learn more. It’s a great tool to better understand these unique places and the momentous history that happened at them.”

“NeoTreks is proud to have had a hand in creating this mobile app to help people appreciate some of the most important and consequential battlefields of the Civil War, the defining conflict in our nation’s history,” said Michael Bullock, president and CEO of NeoTreks Inc. “We hope it entices more people to visit and learn more about these sacred sites and their unique qualities of historical moment, personalities and place.”

The Battle Maps app includes an overview of the four-year-long war, timelines of the fighting, and brief histories of 14 of the conflict’s major campaigns, plus the Confederates’ 1862 excursion into Kentucky, as well as links to the Trust’s full suite of mobile Battle App guides. To date, titles in the Battle App series have been downloaded more than 670,000 times.

The Battle Maps app is available for free in iOS and Android versions from Apple’s App Store and Google Play. In addition to smartphones, it also works on iPads, the iPod Touch and Android tablets. If the trust has a multimedia app for a particular battlefield, a link in the maps app takes users to it for a convenient download.

The app links mobile users to resources about its battles on the trust’s website, where people can learn more about each engagement, and get information about visiting battlefields and related historic sites. For select battlefields, the web resources include videos, virtual tours, animated maps, photos, articles and preservation opportunities. To aid visitors, the website includes 28 travel itineraries for Civil War, Revolutionary War and War of 1812 battlefields.

Using GPS, the Battle Maps app places a moving blue dot wherever a smartphone user is on the ground at or near a battlefield, Pinching and zooming the app’s base map will find a Civil War battlefield near the user or in specific geographic regions. Tapping the GPS button shows their location near or on that battlefield. Users can save maps to their phone for faster access, and to have them handy when they don’t have Wi–Fi or good connectivity.

The Battle Maps app was created with support from the HTR Foundation of St. Petersburg, Fla.

All of the trust’s battle app guides can be found at battlefields.org/mobileapps.