Balancing the Ledger on Juneteenth 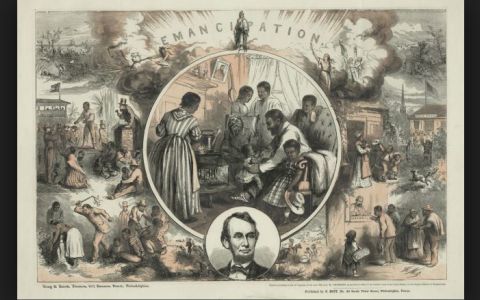 In 2019, Juneteenth will be celebrated as emancipation was in the old days: with calls for reparations. As the country marks 154 years since news of the end of slavery belatedly came to Texas, the House Judiciary Committee will hold a hearing on the subject of reparations for black Americans.

It is a watershed moment in the larger debate over American policy and memory with regard to an enduring sin.The hearing marks a return to the early black-American celebrations and jubilees, which were staged even as formerly enslaved people beseeched the Freedmen’s Bureau or the Union Army for land. And that’s for good reason. Juneteenth has always had a contradiction at its core: It is a second Independence Day braided together with reminders of ongoing oppression.
A daytime protest on June 11, 1964, of the slave market in St. Augustine, Florida ASSOCIATED PRESS
Its spread from Texas to the rest of the United States accelerated in the wake of the assassination of Martin Luther King Jr., as a sort of home-going for King and other victims of white-supremacist violence, fusing sorrow and jubilation.For decades, the successes of the civil-rights movement elevated the jubilation. But in recent years, the tenor of Juneteenth has changed. Black Americans see more clearly just how deep white supremacy rests in the country’s bones. The sorrow now predominates, and with it comes an urgency to hold power to account, and to remember who and what is owed.

Read: Celebrating Juneteenth in a moment of peril

Amid the wreckage of Reconstruction, the sociologist W. E. B. Du Bois wrote Black Reconstruction in America, a celebration of freedom demanded and claimed, and a lamentation of the collapse of an era in which the country could have truly made good on its promises to the enslaved. In it, he made a prediction. “This the American black man knows: his fight here is a fight to the finish,” Du Bois wrote. “Either he dies or wins. If he wins it will be by no subterfuge or evasion of amalgamation. He will enter modern civilization here in America as a black man on terms of perfect and unlimited equality with any white man, or he will enter not at all. Either extermination root and branch, or absolute equality. There can be no compromise. This is the last great battle of the West.”

For Du Bois, the path to a full liberation included restitution, land redistribution, the guarantee of a quality education, and positive and proactive protections for civil rights for the formerly enslaved and their descendants. Until those goals were achieved, he predicted, black Americans would be consigned to an unsteady state of second-class citizenship that would always tend toward oblivion. To Du Bois, if true material equality could not be enforced and racial hegemony smashed even by might of victorious arms, then it was proof that white supremacy would always have the power to escape any cage placed around it. Securing reparations, and a companion package of reforms that actually siphoned power from white elites and gave it to black laborers, was not just a practical necessity, but a moral test.

Of course, America failed that examination. None of Du Bois’s aims were accomplished in full. Redemption destroyed Reconstruction, and Jim Crow enacted another century of formalized and state-enforced theft from black people by white people. Even the end of Jim Crow was marked by an incomplete reconstruction. Black civil-rights leaders were assassinated in waves, and the economic and housing reforms pushed at the end of the civil-rights movement were never realized. Affirmative action was diminished by white resistance, and, against the wishes of Justice Thurgood Marshall, the Supreme Court eliminated racial quotas. Black farmers never received anything near full compensation for land stolen with the assistance of the federal government, and the proactive protections of the Voting Rights Act were largely dismantled by the Court in 2013.

Read: The quintessential Americanness of Juneteenth

Du Bois’s prediction now seems prophetic. The rejection of labor protections gave rise to sharecropping and reified a racial wealth hierarchy that has never been overturned. The failure to redistribute land from the enslavers to the enslaved that Du Bois chronicled led directly to the Great Migration, as black families fled their homes in search of genuine opportunity. Arriving in cities such as Chicago, they were met instead with a new round of dispossession. Discriminatory contract buying of homes in Chicago cost them between $3 billion and $4 billion. The absence of proactive protections for the black vote paved the way for disenfranchisement, and for the unsteady state of voting rights. The civil-rights-era efforts by the federal government to enforce equality were abandoned in many places, restoring a segregated health-care system and segregated schools.

Now, however, a growing and body of research and reporting has tied those rejections of pro-equality policies to visible racial disparities in health and wealth. These linkages in many cases have provided data to back concerns within black communities that have long been dismissed as conspiratorial ravings. Yes, police really are stealing from black communities by way of discriminatory tickets. Yes, much of the conservative push to enact more restrictive voting laws is intended to dilute black voting power. Those linkages are empowering in a way, cutting through decades of gaslighting and disbelief. And they all point to the potential utility of reparations, not just as a way to address the legacy of slavery, but as the only way to reckon with the caste system that America allowed to be built as it looked the other way after slavery’s end.The idea of reparations is somehow both avant-garde and extraordinarily old. Its reemergence stems from a broad reassessment of the trajectory of black America’s material conditions, and a realization that even with the extraordinary efforts of individual black people and some political and economic protections, true equality always appears just out of reach.The reparations debate now necessarily extends beyond slavery, drawing from Jim Crow and more recent discriminatory practices in the North and West. Scholars are producing estimates of exactly how much wealth was stolen by tools such as restrictive covenants and mass incarceration. And, critically, researchers have also clearly outlined exactly how state power helped produce the wealth of those who have it: through favorable tax policy, social insurance, powerful institutions, and massive land and wealth transfers. America haspursued most of the programs Du Bois desperately wanted to create during Reconstruction. But the country has enacted them mostly for white people instead of the scions of the enslaved.

There is a ledger, and more and more black Americans believe it must be balanced. Resistance to that notion is perhaps best encapsulated by Senate Majority Leader Mitch McConnell, who said on Tuesday: “I don’t want reparations for something that happened 150 years ago … We’ve tried to deal with the original sin of slavery by passing civil-rights legislation and electing an African American president.” Conveniently, McConnell did not mention Jim Crow, the reason it took 100 years for civil-rights legislation to be passed after the Civil War. And if he does view the election of President Barack Obama as a duly appointed form of reparations, then McConnell’s own resistance to, and repeated stonewalling of, Obama’s presidency deserve some probing.

In American politics, as President Donald Trump’s career suggests, time and inertia confer legitimacy. The national celebration of emancipation has reverted to a purely historic endeavor, one stripped of the demand for full equality. Slavery has been relegated to a hazily indistinct past, and the ways in which it obviously influenced modern law are elided. Among those who wish to share in the font of white political power, this mythology is purposeful and empowering.

Memory, however, is powerful enough to expose myth. And memory is the purpose of Juneteenth. The testimonies of people who were enslaved, as well as their children, grandchildren, and distant descendants, are integral parts of the holiday. In predicting that the black community would either attain equality or be eliminated “root and branch,” Du Bois underestimated the strength of memory, which has allowed the black community to endure.On Juneteenth, it seizes the narrative, reminding the country of its original debt, and the debts it has since accrued. And this Juneteenth, that reminder will be delivered in the seat of American power. This is, and has always been, the highest purpose of jubilee: to deliver a moral accounting.–theatlantic.com