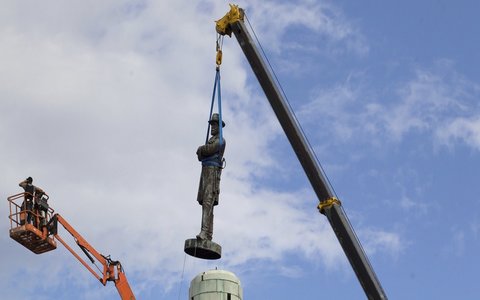 In this May 19, 2017 photo, a statue of Confederate General Robert E. Lee is removed from Lee Circle in New Orleans. AP PHOTO

In Franklin, Tennessee, a lifesize statue of a Confederate soldier, referred to by locals as “Chip,” stands atop a 31-foot base in the center of the city’s public square. The statue was dedicated in 1899 by the United Daughters of the Confederacy, and is meant to commemorate the contributions of soldiers in the Civil War, many of whom fought in the Battle of Franklin, a bloody conflict won by the Union in 1864.

There are just under 100 Confederate monuments like the one in Franklin around Tennessee, and about 1,700 across the country, according to a tally by the Southern Poverty Law Center. Over the past few years, these statues have ignited a national conversation about valorizing the losing side of the Civil War, the history of slavery and the “Lost Cause” mythology built up around the Confederacy. In many cities, they’ve also spurred local debates about what to do with monuments often given prominent place in the public square.

Much of the debate around Confederate monuments has circled around two options: remove the statues or let them stay. But in some cities, a third option has arisen: contextualize them. By placing plaques and launching educational campaigns, some in local government hope to expand the narrative being told about the Civil War, including the history of slavery and African American involvement in the war. Franklin recently chose this option, after a lobbying effort by community members who said they wanted a “fuller story” presented in the public space. The city council voted to install five markers around the monument in the city square, one of which would explain that the square was used for slave auctions for decades before the Civil War. The city is also commissioning a statue dedicated to black soldiers who fought for the Union.

“What we wanted was equal footing, if you will, a place of equal nobility, to tell other stories that haven’t been told,” Pastor Chris Williamson, a leader on the community push to add to the monument, told local public radio.

Franklin alderman Dana McLendon agreed. “I think it’s important to provide context. Hopefully this will tell not all, but some of the rest of the story,” he said.

But this effort has sparked some controversy, with the city currently embroiled in a legal dispute about the plan.

The choice about what to do with Confederate statues in Tennessee is limited, as the state is one of seven that passed laws in recent years that prevents cities from removing, renaming, or relocating monuments. In 2013, Tennessee enacted the Heritage Preservation Act, requiring municipalities to apply for a waiver if they want to remove statues on public land. The Tennessee Historical Commission, mostly appointed by the governor, has rejected numerous city petitions in recent years.

City officials in other states with similar laws—Alabama, Georgia, Mississippi, North Carolina, South Carolina and Virginia—also grappled with what to do with monuments some people have objected to if they can’t take them down.

More and more are choosing to contextualize. Atlanta has installed plaques around several monuments, and so has Dekalb County, Georgia. The mayor of Richmond, Virginia created a commission to study how a city where a prominent thoroughfare—Monument Avenue—honors five Confederate leaders with statues could properly contextualize them all. The Atlanta History Center even has a guide for cities looking for ideas for plaques.

Henry Adams, a professor of art history at Case Western Reserve University, said that he favors contextualizing over removing, even where that is an option. “My concern with obliterating these things is that it could be like pretending the Civil War never happened,” he said. “You have to take these things case-by-case, but to the extent that you can foster dialogue, that’s very healthy.”

McLendon echoed a similar view, and said that whether or not the city would push for removal or contextualization would depend on several factors, including when the monument was erected and who placed it there. “Some of these were placed in the 1950s honoring a Confederate general who had never set foot in the town. That kind of thing would make sense for removal,” he said. “But others were placed by widows, mothers, and children of Confederate soldiers who were commemorating a battle fought here. Those are different.”

The statue in question—which isn’t for a particular person, but depicts an anonymous soldier—falls into the latter category, and for that reason, McLendon is in favor of contextualization. And while contextualization doesn’t require approval from a state review panel like removal would, that doesn’t mean it’s without challenges. Many memorials, including the one in Franklin’s square, are privately owned.

When Franklin announced the plan to put up contextual markers, the United Daughters of the Confederacy threatened to sue, claiming that they owned not just the monument, but the entire square. The city then preemptively sued the group.

Doug Jones, the attorney for the UDC in this case, and in a previous case where the group sued Vanderbilt University over the renaming of “Confederate Hall,” said that the organization isn’t against contextualization, but believes that the city is actually trying to tear the monument down. “The City of Franklin was doing a good thing to put up markers about slavery during the war,” he said. “But they saw an opportunity to take the monument down, and we stopped that.”

McLendon disputes this and said that there is “no secret strategy” to take the statue from the group or tear it down. “In fact,” he said, “we’re desperately trying to give them a deed to the monument and the land directly under it.”

Much of the lawsuit revolves around this deed or the lack of one—in 1899, the county allowed UDC to build a monument, but didn’t give the group a deed. UDC is now contending that they were given ownership of the entire square; the city is arguing that the group owns only the monument and the land directly under it.

McLendon said UDC picked a convenient time to make this assertion. “For 120 years now, the city has maintained the square, and the UDC has never protested when we landscaped, irrigated, mowed, built and rebuilt sidewalks,” he said. “The city has gone about the city’s business without a hint of protest.”

But Jones said that doesn’t prove ownership. “If I come mow your lawn, that doesn’t give me a mortgage over your property,” he said.

Jones also pointed to 1996 case, in which Leslie Steele, an African American city resident, claimed that the city’s maintenance of the property, funded by tax dollars, was a violation of his civil rights. The city argued in that case that they didn’t own the monument or the land underneath it. “They’ve argued in the past that we own the monument,” Jones said. “But they never asked us to be involved in the planning for the markers.”

One broader question in arguments about contextualization is whether it is even a good strategy.

Richard Rose, the president of the Atlanta chapter of the NAACP, told The Guardian that plaques are insufficient and that all Confederate monuments should be removed. “You can’t contextualize racism or compromise on racism,” he said.

Jalane Schmidt, a professor at the University of Virginia, similarly told The Washington Post that plaques are like band-aids. “A little tiny plaque, compared to this huge monument. You can see the monument a long ways away; you have to get up real close to see a plaque,” she said.

In places where monuments are points of contention, just doing nothing doesn’t mean the issue will go away. After protracted arguments about what to do with the “Silent Sam” statue at the University of North Carolina at Chapel Hill, including from people who wanted to see the monument contextualized, students ended up toppling it. University system leaders are still debating what to do with the statue.

Pastor Kevin Riggs of the Franklin Community Church, who was part of the group of pastors and others who  brought the proposal for contextualization to his city, said that the genesis of the idea came from the debate about the Robert E. Lee statue in Charlottesville, Virginia. That monument became the site of deadly violence during the 2017 Unite the Right Rally.

“In the south, the Confederate story is romanticized, and we’re told that the fight was about states’ rights, not slavery, which is absolutely false,” he said. “By telling the story of African American experiences during the War, it shifts the attention. We’re lessening the statue’s intimidating power.”

Riggs said that growing up, he was taught that the Civil War was one of northern aggression, and that many in the south may see the removal of statues as a continuance of that aggression. Therefore, he said contextualization is sometimes the best option. “We wanted to do something that united us, rather than divided,” he said. “We wanted to build something up rather than tearing something down.”