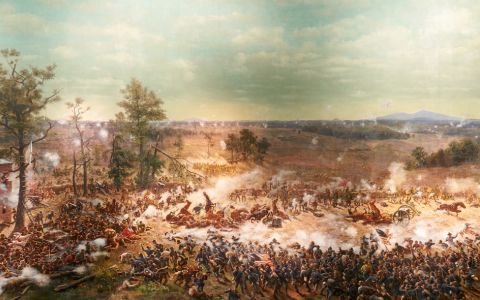 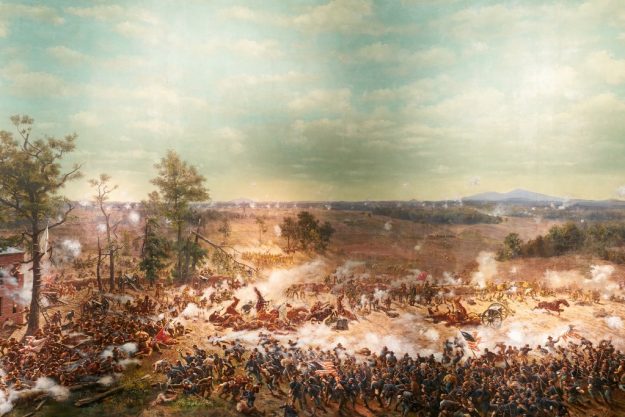 In order to see “The Battle of Atlanta” more or less the way that it was meant to be seen, you must take a short escalator up to a platform that stands about a third as high as the panoramic painting itself, which is nearly fifty feet tall and is now housed in a specially constructed room at the Atlanta History Center.

The landscape circles all the way around you, its sky receding out of sight, its foreground populated by mannequins of soldiers on a dirt floor below. The lights dim, and a short film, projected onto the painting, begins to describe the critical moment, at a quarter to five in the afternoon, on July 22, 1864, when the Union General John A. (Black Jack) Logan decisively pushed back advancing Confederate forces as they stormed across a rail line outside of Atlanta, helping to hasten the end of the Civil War.

Moving pictures did not exist in the eighteen-eighties, when “The Battle of Atlanta” was painted, over the course of five months, by seventeen beer-drinking German artists employed by the American Panorama Company, in Milwaukee, Wisconsin. Cycloramas were the cutting edge of history-as-entertainment. Many of these giant canvas paintings portrayed key moments from the Civil War: Gettysburg, for instance, or the Battle Above the Clouds. (A Gettysburg cyclorama is still displayed at a museum near the site of the battle.)

“The Battle of Atlanta” was meant to depict a moment of glory for the North. The German artists consulted with Civil War veterans, striving for accuracy in the details of uniforms and locations, many of which they visited. When the painting was unveiled, in Minneapolis, in 1886, William Tecumseh Sherman declared it to be “the best picture of a battle on exhibition in this country.” Two years later, supporters of Benjamin Harrison, the Republican nominee for President, got him added to the painting before the cyclorama was displayed in his home state of Indiana. Harrison did not fight in the Battle of Atlanta—though he did fight nearby—and the cyclorama manager who’d allowed the repainting later resigned. (Harrison lost the popular vote but won the election; he was removed from the canvas more than a century later.)

In 1890, the painting was sold to a circus hustler named Paul Atkinson, who moved it to Chattanooga and altered its details so that it would appeal to Southern audiences: Confederate prisoners of war and a captured Confederate flag became Union P.O.W.s and a captured Union flag. Atkinson marketed the cyclorama as “the only Confederate victory ever painted.”

It was not the revisionist cash cow that he hoped it would be, though. According to a recent piece, by Jack Hitt, in Smithsonian Magazine, Atkinson sold it, in 1893, for nine hundred and thirty-seven dollars, to the businessman Ernest Woodruff, who would later lead a group of investors who bought the Coca-Cola Company. Woodruff then sold it to a lumber merchant named George Gress, who moved it to Atlanta’s Grant Park neighborhood, which was also home to the recently created Atlanta Zoo. In the nineteen-thirties, a newspaper illustrator named Wilbur Kurtz added a number of proudly waving Confederate flags and soldiers to the painting. Legend has it that when Clark Gable visited Atlanta for the premiere of “Gone with the Wind,” he told Kurtz that the only thing he didn’t love about the cyclorama was that he wasn’t in it. So one of the soldier mannequins was painted to look like him.

Interest in the cyclorama waned, but, in 1979, local officials pushed to have the painting moved to the site of Stone Mountain, a massive carving, twenty miles east of Atlanta, which depicts Robert E. Lee, Jefferson Davis, and Stonewall Jackson astride their horses—the Confederate-sympathizer’s answer to Mount Rushmore. Atlanta’s first African-American mayor, Maynard Jackson, noted that the cyclorama portrayed “a battle that helped free my ancestors” and vowed to keep it in the city. James Earl Jones recorded a new introduction to the painting, which was once again seen not as a Confederate monument but as a tribute to the right side of history.