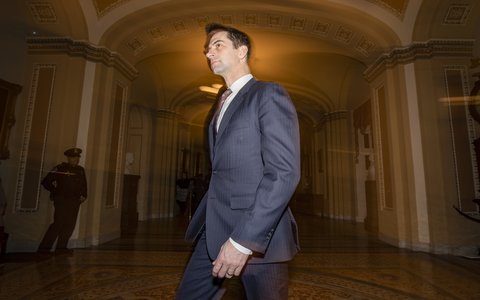 For a number of reasons, the history of American slavery has been in the news over the past year. The New York Times’s 1619 Project–commemorating the 400th anniversary of the arrival of the first slaves, the Black Lives Matter movement, renewed interest in the idea of reparations, the ongoing controversy about removing monuments to Civil War traitors, Republican pandering to neo-Confederates, and new historical research have all contributed to renewed interest in the topic.

Conservative Republicans like Senator Tom Cotton, who represents Arkansas, a state of the old Confederacy, have taken issue with efforts to raise again the issue of slavery. They feel the subject was closed by the Civil War, and the only purpose of continuing to dwell on it is to make white people feel guilty about something for which they have no personal responsibility.

“The New York Times’s 1619 Project is a racially divisive, revisionist account of history that denies the noble principles of freedom and equality on which our nation was founded. Not a single cent of federal funding should go to indoctrinate young Americans with this left-wing garbage,” said Cotton, introducing legislation that would prohibit the use of federal funds to teach the 1619 Project in schools.

In other ways as well, Cotton has become the point man for conservatives on the issue of slavery. In a recent interview, he called it a “necessary evil” in the establishment of the United States. Many people criticized Cotton for this claim, but in fact the Constitution did embody a number of protections for the institution of slavery that were indeed critical to its adoption, including limitations on the taxing power. Had enough of the Founding Fathers insisted on the abolition of slavery, the 13 original states would have been divided into two separate nations right from the beginning.

As Senator Jefferson Davis of Mississippi, who later became the president of the Confederacy, put it in a February 13, 1850, speech: “Slavery existed before the formation of this Union. It derived from the Constitution that recognition which it would not have enjoyed without the confederation… It was one of the compromises of the Constitution that the slave property in the southern States should be recognized as property throughout the United States.”

Latter-day scholars and polemicists will never resolve the question of whether the continuation of slavery was a price too high to establish the United States as an independent nation under the Constitution. Similarly, no one can offer any definitive assessment of whether the deadliest war in American history in terms of total battlefield deaths by Americans (North and South) was necessary to end slavery definitively. The treatment of the former slaves and their descendants, both during Reconstruction and down to the present day, will likewise forever be questioned and debated.

But some key points about the legacies of slavery in shaping current political debates are particularly salient. One is the responsibility of Christianity in the establishment and perpetuation of slavery as well as its role in present-day support for white supremacy and discrimination against racial minorities. This is the subject of a new book White Too Long by Robert P. Jones, founder of the Public Religion Research Institute.

The undeniable fact is that there are many passages in the Bible that support slavery in both the old and new testaments. They were frequently invoked by defenders of slavery to justify that peculiar institution. Senator Davis said of slavery during the same speech: “It was established by decree of Almighty God … it is sanctioned in the Bible, in both Testaments, from Genesis to Revelations [sic].”

James H. Hammond, who served as representative, governor, and senator from South Carolina, was even more adamant, arguing that the Bible demanded the existence of slavery (emphasis in original):

It is impossible, therefore, to suppose that slavery is contrary to the Will of God…. We accept the Bible terms as the definition of our slavery, and its precepts as the guide of our conduct…. I think, then, I may safely conclude, and I firmly believe, that American slavery is not only not a sin, but specially commanded by God through Moses, and approved by Christ through His Apostles.

Of course, the abolitionists responded with biblical arguments of their own for why slavery was abhorrent. Although they essentially won the debate by default when the Union was victorious in the Civil War, the defensive posture of the South toward slavery lives on today in the form of evangelicalism, biblical literalism, and Christian fundamentalism.

In debates with abolitionists, defenders of slavery found it necessary to take the Bible literally in order to get maximum value from its many pro-slavery passages. In this way, they could ignore the general thrust of Christ’s teachings to love our fellow man. Defenders of slavery also found it expedient to support an originalist interpretation of the Constitution because of its implicit support for slavery. Thus, religious fundamentalism and constitutional originalism underpinned the conservatism that was the hallmark of the southern zeitgeist. The historian Clement Eaton put it in The Growth of Southern Civilization:

The religious belief of an overwhelming majority of Southerners in 1860 was of a type that would today be called fundamentalism, resting on a literal interpretation of the Bible…. Religious conservatism had its counterpart in political conservatism, expressed in almost an idolatry of the federal Constitution as interpreted by the Virginia and Kentucky resolutions of 1798.

Equally troubling is another article of faith among Southern slave-holding Christians: the notion that racial discrimination is justified by Christianity. This belief derives in part from a passage of the Bible in the Book of Genesis where Noah’s son Ham sees his father’s nakedness and is cursed for it, causing him and his descendants to be marked. Many segregation-minded biblical literalists continue to believe that the black race was created by this mark and thus carries Noah’s curse, or the curse of Ham, for all time. Many also believe that Jesus was white, contrary to all historical evidence.

The utterly nonsensical theory that black people are born cursed by God because of some trivial event millennia ago could easily be dismissed—except that there is much evidence that many Christian fundamentalists accept it, at least implicitly. It was also part of the official doctrine of the Mormon Church throughout most of its history before its eventual abandonment. Jones explains how different strands of Christian theology vitally underpin the defense of white supremacy today:

A dizzying array of resources across multiple fields of human inquiry has been deployed to defend [white supremacy]. By far, the strongest were theological arguments that presented white supremacy as divine mandate. Particular readings of the Bible provided the scaffolding for these arguments. Black Americans, for example, were cast as descendants of Cain, whom the book of Genesis describes as physically marked by God after killing his brother, Abel, and then lying to God about the crime. In the white Christian version of this narrative, the original ancestor was a Black criminal, and modern-day dark-skinned people continue to bear the physical mark of this ancient transgression. This story implied that Blacks likely inherited both their purported ancestor’s physical distinctiveness and his inferior moral character.

So widespread is the idea that the Bible justifies racial discrimination that Martin Luther King, Jr., himself was compelled to refute it in a November 4, 1956, sermon:

I understand that there are Christians among you who try to justify segregation on the basis of the Bible. They argue that the Negro is inferior by nature because of Noah’s curse upon the children of Ham. Oh my friends, this is blasphemy. This is against everything that the Christian religion stands for. I must say to you as I have said to so many Christians before, that in Christ “there is neither Jew nor Gentile, there is neither bond nor free, there is neither male nor female, for we are all one in Christ Jesus.” Moreover, I must reiterate the words that I uttered on Mars Hill: “God that made the world and all things therein … hath made of one blood all nations of men for to dwell on all the face of the earth.”

It would be wrong to suggest that Christianity bears primary responsibility for slavery, racial discrimination, or white supremacy. Rather, it was a critical salve for those who felt guilt over the institution of slavery while materially benefiting from it. Similarly, those with a racist disposition can take comfort in knowing that evangelicalism poses no conflict for them. Just as it is often said that slavery was the “original sin” for the Constitution and the American nation itself, Christians should understand that the same indictment applies to some of their most deeply held religious beliefs.

Bruce Bartlett is a longtime observer and commenter on economic and political affairs in Washington, D.C., who has written for The New York Times, The Washington Post, The Wall Street Journal, USA Today, Politico, and many others. A bestselling author, his latest book is The Truth Matters: A Citizen’s Guide to Separating Facts From Lies and Stopping Fake News in Its Tracks.