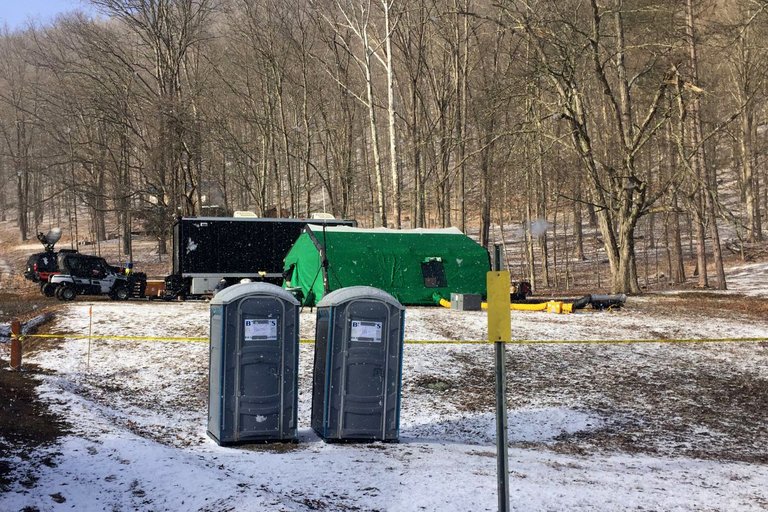 For decades, treasure hunters in Pennsylvania have suspected that there is a trove of Civil War gold lost in a rural forest in the northwestern part of the state.

But the mystery about where it is hidden, or if it even exists, has recently deepened.

Last week, F.B.I. representatives showed up at a site in Dents Run, Elk County, an area known for its seasonal elk viewing activities that feed the economy of nearby Benezette Township.

F.B.I. and Department of Conservation and Natural Resources representatives set up a base near Benezette Township, Elk County, Pa., on March 13, apparently searching for Civil War gold rumored to have been lost there. Credit Katie Weidenboerner/The Courier-Express, via Associated Press

The agency, in a statement on Monday, said very little about the mission aside from describing its work as a “court-authorized excavation” at Dents Run that ended on March 14. Its conclusion: “Nothing was found.”

The sudden and apparently secretive appearance of federal investigators at the site has deepened the mystery over the fate of the gold bars that has persisted for more than a century, despite the efforts and hopes of treasure hunters, the study of historians and the years of scrutiny by local news media.

“There has been numerous people over the past 20 or 30 years traveling up and down the mountains looking for the gold,” said James Burke, executive director of the local Mt. Zion Historical Society. His group has sent teams into the area looking for the gold, and hired a private investigator at one point.

“That is just creating a mystery in itself,” he said.

In 1863, according to historical accounts, just before the outbreak of the Battle of Gettysburg in July, the Union army wanted to move dozens of gold bars from Wheeling, W.Va., northeast through Pennsylvania, to pay soldiers. The wagon train caravan went to Ridgway and then on to St. Mary’s, where the idea was to pick up a local guide and then swing over the mountains and onward to Philadelphia, Mr. Burke said.

The story of the gold bars was pieced together from old documents, a map and even a mysterious note found decades ago in a hiding place on the back of a bed post in Caledonia, Pa., he said.

“The gold got lost,” he said. “It was pretty much a wilderness area, and they got wrapped around in the mountains over in Dents Runs or Hicks Run.”

Some reports say there were 52 bars, but Mr. Burke said he thought there were 26, with each 14-carat bar weighing 50 pounds, making the trove potentially worth millions of dollars.

“We have very, very little credible or documented evidence of the gold,” he said. “A lot of it is hearsay.”

Over the years, the speculation has turned into action, inspiring treasure hunters. Finders Keepers USA, a Pennsylvania group that describes itself as a treasury-recovery service, has documented its efforts to locate the gold. The owners of Finders Keepers, Dennis and Kem Parada, were at the site when the F.B.I. visited last week, according to a report by WJAC, a television station in Johnstown.

On their website, the Finders Keepers founders, who did not reply to an email on Tuesday, said that they believed they had found the location of the gold but that federal law had prevented them from excavating it. The group, which describes itself as a “locate and recovery service for under ground metal artifacts,” also posted a copy of a 2005 letter from the Bureau of Forestry to the district overseeing Elk State Forest.

It said Dennis Parada had excavated materials from Dents Run that he believed were related to the Civil War, but on examination they were found to be camp debris, from the 1880s at the earliest, and of no cultural or historical significance. Mr. Parada was banned from further excavations there, but he was permitted to use metal detectors, the letter said.

“I told D.C.N.R. I’m not going to quit until it’s dug up,” Mr. Parada told The Pittsburgh Post-Gazette in 2008, referring to the Department of Conservation and Natural Resources. “And if I die, my kid’s going to be around and make sure it’s dug up. There’s something in there and I’m not giving up.”

On Tuesday, Terrence Brady, a spokesman for the conservation department, which also sent representatives to the site when the F.B.I. was there, said he had been told not to say anything about the F.B.I.’s excavation.

The story of the lost gold “has always been on the back burner,” he said.

“What prompted this resurgence of interest with a federal agency?” he added. “It is a rumor, a story if you will, that refuses to die.”