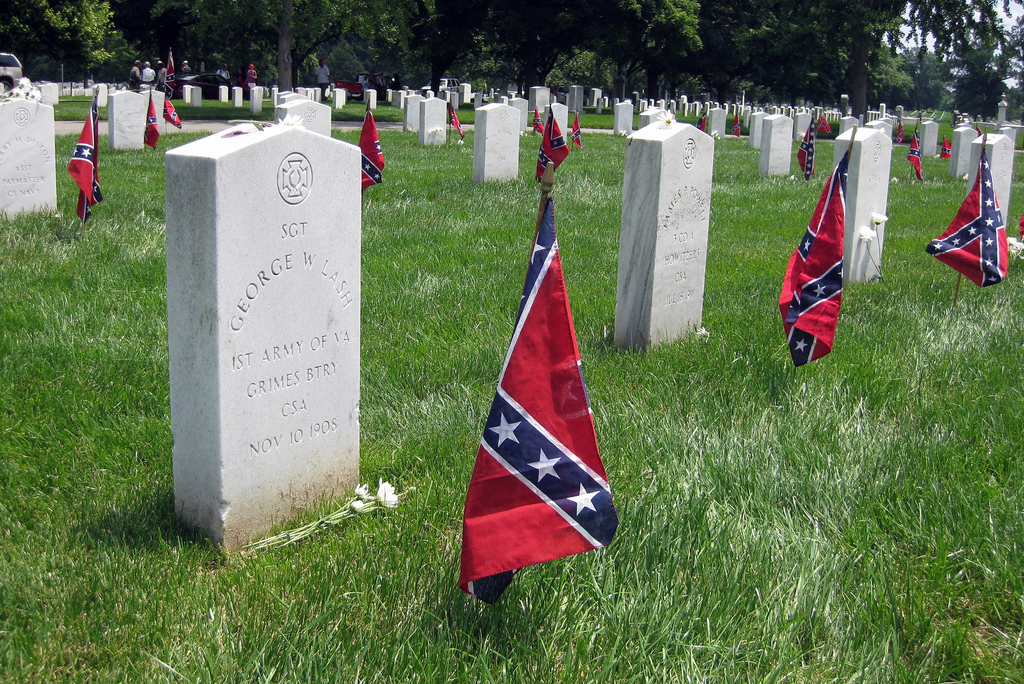 WASHINGTON — A year after South Carolina removed the Confederate flag from its capitol grounds, official Washington is struggling with further restrictions on the flag’s display on federal property, including in the U.S. Capitol complex. 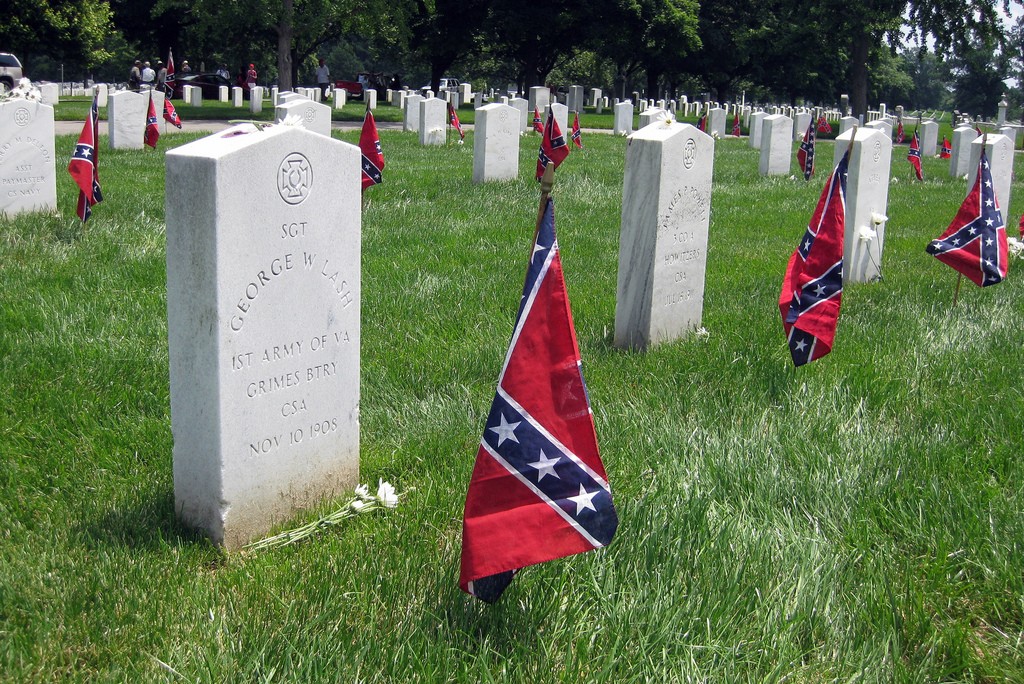 Confederate battle flags stand next to graves of soldiers in the Confederate section of Arlington National Cemetery. Today, a handful of Southern states mark Confederate Memorial Day as a state holiday. Photo by Wally Gobetz/Flickr.

The National Park Service, the Department of Veterans Affairs and the Army have longstanding guidelines for its cemeteries that permit display of the Confederate flag one or two days a year. This is particularly true in Southern states that celebrate Confederate Memorial Day, giving descendants of Southern soldiers the chance to use the flag to commemorate their ancestors.

Earlier this month, Republicans quietly dumped a provision preventing the flag from being flown over mass graves of Confederate soldiers from broader legislation to fund the Department of Veterans Affairs. Flag displays would still have been allowed over the graves of individual soldiers.

The move angered Democrats, especially since both House Republicans and Democrats had voted in May for the provision. Further complicating the issue is that the flag provision had been combined with an overall bill to fund the fight against the Zika virus.

“Republicans even used this … listen to this one — to block the prohibition of Confederate flags on federal facilities,” said top Senate Democrat Harry Reid of Nevada.

Reid mentioned the flag fight every day this week, often muddying the facts.

On Monday, he accused Republicans of allowing the flag to fly over “any veterans’ facility,” which would include hospitals and clinics. On Tuesday, he claimed that there is already an “order in effect saying you can’t fly the flag on military cemeteries” and said Republicans would rescind it.

Congressional Democrats have not pressed the White House on this issue. Unlike official rulemaking, which requires public feedback and can take years, guidelines on the flag can be swiftly changed by agency officials who answer to the White House.

The White House seemed surprised when asked about it this week.

“I’m not aware of any executive action that’s being contemplated,” White House press secretary Josh Earnest said Tuesday. The White House followed up with a response detailing the limited circumstances in which the flag can be displayed in VA cemeteries.

The flag issue became a national discussion after a white man was arrested for gunning down nine black parishioners last year at a historic church in Charleston, South Carolina. Democrats tried in the aftermath of the shooting to ban the flag’s display at cemeteries run by the National Park Service, but divisions in the House scuttled the effort.

While Republicans in Washington ducked the Confederate flag issue, the South Carolina legislature — dominated by tea party Republicans and including many black Democrats — voted overwhelmingly to remove the flag from the Capitol grounds in Columbia. The debate won wide praise for its civility.

In Washington this year, House Speaker Paul Ryan, R-Wis., sought to put the Confederate flag controversy to rest. Ryan approved a move to block the Mississippi flag, which incorporates the Confederate battle flag in its top inner corner, from being restored to its display in a passageway between the Capitol and a House office building.

Republicans negotiating the final bill to fund the Veterans Affairs department abandoned the provision despite the House vote in May.

“It is shameful that Republicans would once again seek to allow Confederate battle flags, a historic symbol of hate, to be flown over VA cemeteries,” said Rep. Jared Huffman, D-Calif., who had sponsored the provision.

Republicans rammed the bill through the House last week, but Senate Democrats blocked it on Tuesday, angered by the way Republicans had funded the Zika fight and the restrictions they imposed on money for Planned Parenthood.

On Thursday, Reid revisited the Confederate flag topic: “Just for icing on their cake, they decided, ‘You know, let’s get rid of that language in the bill that says you can’t fly a Confederate flag in a military cemetery.’ ”

Yet he bristled when asked Thursday about the flag, including whether the Senate should follow Ryan’s lead and remove the Mississippi flag from a tunnel connecting the Capitol and a Senate office building.

“I can’t imagine you’re hung up on this when we have all the other problems facing us,” Reid chided a questioner.