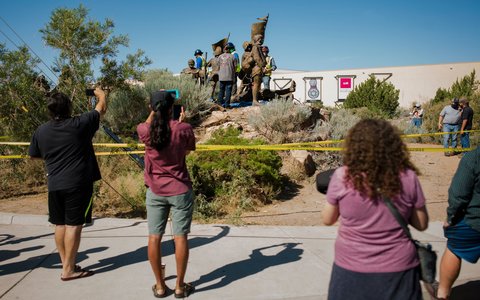 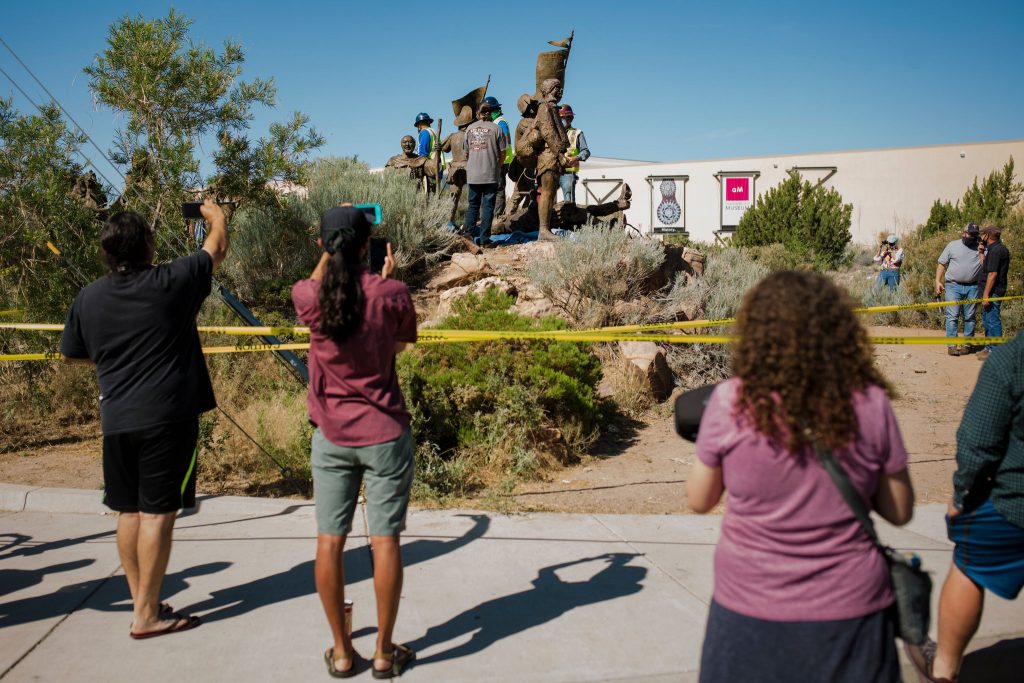 People look on as a crew removes the statue of Juan de Oñate on Tuesday.Credit…Adria Malcolm for The New York Times

The anger in the days after George Floyd’s killing is fueling a national movement to topple perceived symbols of racism and oppression in the United States, as protests over police brutality against African-Americans expand to include demands for a more honest accounting of American history.

In Portland, Ore., demonstrators protesting police killings turned their ire to Thomas Jefferson, toppling a statue of the founding father who also enslaved more than 600 people.

In Richmond, Va., a statue of the Italian navigator and colonizer Christopher Columbus was spray-painted, set on fire and thrown into a lake. In Columbia, S.C., a statue of Columbus was torn down by city officials who feared it may also become the target of vandals.

And in Albuquerque, tensions over a statue of Juan de Oñate, a 16th-century colonial governor exiled from New Mexico over cruel treatment of Native Americans, erupted in street skirmishes and a blast of gunfire before the monument was removed on Tuesday.

Across the country, monuments criticized as symbols of historical oppression have been defaced and brought down at warp speed in recent days. The movement, which initially set its sights on Confederate symbols and examples of racism against African-Americans, has since exploded into a broader cultural moment, forcing a reckoning over issues such as European colonization and the oppression of Native Americans.

“We’re at this inflection point,” said Keegan King, a member of Acoma Pueblo, which endured a massacre of 800 or more people directed by Oñate, the brutal Spanish conquistador and colonial governor. The Black Lives Matter movement, he said, had encouraged people to examine the history around them, and not all of it was merely written in books.

The debate over how to represent the uncomfortable parts of American history is not new, but the extent of the monument-toppling in recent days raises new questions about whether it will result in a fundamental shift in how history is taught to new generations.