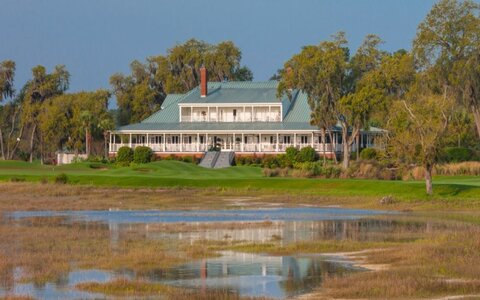 For years at Secession Golf Club in Beaufort, S.C., a private, links-style course surrounded by marsh brimming with nature, the club featured two sets of tees after Union generals (Grant and Sherman) and three after Confederate generals (Lee, Stuart, and Jackson).Or it did up until late August. The tees now carry the names of important people in the club’s history. In response to the May 25 killing of George Floyd at the hands of police and the ensuing nationwide protests over racial injustice, the walking-only course, which opened in 1992, has taken a number of small steps in recent weeks to avoid the perception that it is paying homage to the Confederacy.

In addition to replacing an adaptation of the Confederate States’ first flag with the state flag of South Carolina in their crossed-flag logo (the other is Old Glory), the club also has removed a copy of the Ordinance of Secession, which was first drafted in Beaufort, from a wall inside the front door. (Full disclosure: I know this because I was once a member.)

“The tragic killing of George Floyd caused a lot of people in our country to rethink things, and certainly our situation was no different,” says Mike Gonzalez, the club’s president who, unlike the majority of members, lives in South Carolina. “So, I invited our members to weigh in, and it was clear we needed to do something [to separate themselves], particularly anything that could be deemed to be connected in any way to the Confederate cause, which is certainly nothing we could support. I didn’t want to take any chance that we could be perceived to be something we’re not, because Secession is a very welcoming and inclusive club.”

Changing the name was also considered, but after speaking with many of the 900 members, including all African-Americans members (the club wouldn’t divulge how many there are), Gonzalez concluded that that step wasn’t necessary because the name is meant to acknowledge the broader history of the area, not the act itself. He cites the fact that the Reconstruction Era that enfranchised African Americans, at least for a while, began in Beaufort in 1861 after the Union Army overtook the Lowcountry following its decisive amphibious assault at the Battle of Port Royal. The white plantation owners fled while more than 10,000 enslaved people, about one-third of the enslaved population at the time, stayed and became free.

Also being questioned this year are the handful of clubs named after Confederate generals. Perhaps the most famous is Wade Hampton in western North Carolina (No. 25 on Golf Digest’s list of America’s 100 Greatest Golf Courses).

Many architecture aficionados consider the Tom Fazio gem to be the best mountain course in the country. But unless you’re a history buff, you probably aren’t aware that Wade Hampton III (the course occupies the site of his former summer home) was one of the largest slaveholders in the Southeast before the Civil War, owning a couple of thousand human beings. During the war, without any prior military experience, he commanded a cavalry brigade in the Confederate army and served as Robert E. Lee’s senior subordinate. He was so audacious, routinely sneaking behind Union lines to capture soldiers and supplies, that novelist Margaret Mitchell had Scarlett O’Hara’s first husband in Gone With the Wind serve in his regiment.

Post-war, the Charlestonian became the leader of the “Redeemers” who restored white rule after Reconstruction ended in 1877 and was heavily involved in suppressing the Black vote during his three years as South Carolina governor and his two terms as U.S. Senator in the 1880s. His likeness sits atop a steed on a pedestal in front of the South Carolina State House.

Wade Hampton, the namesake of the highly-ranked North Carolina course, was one of the largest slaveholders in the Southeast before the Civil War. Hulton Archive.

“General Wade Hampton’s personal history and actions are not celebrated or commemorated at our club, and members are not attracted to join the club because of any connection to him or his positions,” says General Manager John Foster. “As we have recently become more aware of his history and many of his actions, it has spurred significant conversation about how best to demonstrate that the positions of General Wade Hampton are not in keeping with the values of our club members.”

Foster says the club is conducting “earnest and frank conversations” but it’s likely a name change will be met with resistance by many members who will object to revising history.

“The history that they’re tying into is one that is often viewed of as romantic,” says Adam Domby, a Civil War historian at the College of Charleston. “The reality of that history that usually goes unsaid is that Wade Hampton used violence and terror to maintain control of enslaved people.”

One of most popular Confederate generals that clubs pay homage to is Thomas “Stonewall” Jackson, who earned the nickname after stopping the Union Army at the First Battle of Bull Run in Lake Manassas, Va., in 1861. Stonewall Golf Club is located seven miles from the battlefield (next door to Robert Trent Jones Golf Club) on Lake Manassas. However, Gary Huebner, the club’s GM, insists there is no association with Jackson.

“Our golf course is actually not named after Stonewall Jackson,” he wrote in an email. “Some people mistakenly call the course Stonewall Jackson Golf Club because of our proximity to the Battle of Bull Run site and the fact that soldiers from both sides of the Civil War walked through the area immediately adjacent to us, but the ‘Jackson’ part is not in our name. We do, however, have stone walls on the facia of our clubhouse and on several holes of the golf course.”

About 40 miles west down I-66 in Middletown, Va., lies Sly Fox Golf Club, which was called Jackson’s Chase until four years ago when Lou Carrozza bought the course and decided to change the name. He did it more to rebrand the course, which had fallen into disrepair, than to avoid any Confederate controversy, but he’s glad now that he did. (The original name, which included a logo of a Confederate soldier with a golf bag, came from Jackson using the area as a staging ground for an attack on the Union Army in the First Battle of Winchester in 1962.)

Another club that avoided controversy was the formerly named Forrest Crossing Golf Course in Franklin, Tenn., south of Nashville. The layout borders the Harpeth River, which Confederate General Nathan Bedford Forrest reportedly crossed with his cavalry during the Battle of Franklin in 1864. That same year in western Tennessee along the Mississippi River, Forrest slaughtered 300 black Union soldiers instead of taking them prisoner in what’s known as the Fort Pillow massacre. After the war, he was a founder of the KKK. In 2017, American Golf Corporation, which owned the course then, shortened the name to The Crossing (the course is now called Franklin Bridge Golf Club).

“We believe that the game of golf is a sport that can help bring people together despite their differences,” American Golf said in a statement at the time, “and want everyone to feel welcome to play this beautiful course.”

Carrozza, who grew up in Massachusetts, is sympathetic to courses faced with the Confederate dilemma and feels they shouldn’t be forced to change their name to be politically correct. “I think it’s dangerous to hide history,” he says. “It’s American history. There were Americans on both sides. This was a Confederate area, so you still have generations of people who grew up here whose distant relatives died fighting for what they believed in. I kind of think that it was about more than just slavery. It’s complex.”

No, it’s not, says Domby, an expert on “The Lost Cause,” the attempt by organizations like the United Daughters of the Confederacy (UDC) and the Sons of Confederate Veterans (SCV) to position the “War of Northern Aggression” as a just cause about states’ rights.

“Let’s be clear: The Civil War was about slavery. It’s important to remember that. But the ‘Lost Cause’ wants you to believe it’s about states’ rights instead because then they’re not losers and because states’ rights become a key way of fighting African American enfranchisement and equal rights efforts by the Federal Government. After the war, the past was rewritten in a way that romanticized the Old South and the Confederacy.”

To be fair, it’s not just Southerners who have romanticized the antebellum South. Golf communities in the South have used Gone With the Wind marketing tactics to lure Northerners down to the mossy neighborhoods for decades. But even that’s starting to change with the disuse of the word plantation. One of the biggest golf resorts in the South, Reynolds Lake Oconee outside Atlanta, was called Reynolds Plantation for more than 30 years until it quietly dropped plantation in 2015. The move for the change started when corporate groups considering the on-site Ritz-Carlton hotel as a meeting venue raised the issue, according to a source who wishes to remain anonymous.

Other communities in the South, particularly on Hilton Head Island, S.C., which was once home to more than 50 plantations worked by enslaved Africans, are currently grappling with the issue. Just recently, the members of Wexford and Palmetto Hall golf communities voted to drop the word, at least from their signage if not legally. Others following suit just off island include Belfair and Colleton River. But the largest golf community on the island, Hilton Head Plantation, still hasn’t made the change, despite the best efforts of HHP Community for Change.

“The elimination of the word ‘plantation’ from the gated communities in our area has been in progress for several years as an acknowledgment that it is no longer OK to use language that perpetuates the memory of a shameful time in our history,” the site states. “We have an amazing, diverse community that provides amenities, friendships and security to 4,000+ households, and we want our name to reflect a more current, more descriptive picture of who we are and our humanity.”“I never once thought of the word plantation as a racist symbol,” says Mike Bonvissuto, a lifelong golfer from New York who moved to Hilton Head Plantation in 2006. “It doesn’t make a difference to me if it’s removed, but it’s just a word that has evolved with the times to mean serene and oak-filled to me. There are so many more important things to focus on, like seeing the ancestors of former slaves who live here in trailers finally getting deeds and ownership rights to land their families have been living on since they were freed.”

But optics matter. Wikipedia keeps a list of name changes related to the Floyd protests that numbers more than 100 across categories from brand names to band names (the Dixie Chicks are now The Chicks and Lady Antebellum is just Lady A). Most famously, the Washington Redskins announced in July they were finally dropping Redskins for a replacement not yet determined. The only other sporting entry on the list is the Edmonton Eskimos of the Canadian Football League, although the Cleveland Indians say they are reviewing their name to “embrace [their] responsibility to advance social justice and equality.” Not one golf club is on the list, however.

“Removing a Confederate monument or changing the name of a golf club isn’t going to undo systemic racism, but it begins the process of undoing a narrative of history that upholds systemic racism,” Domby says. “It’s a starting point in a larger conversation.”