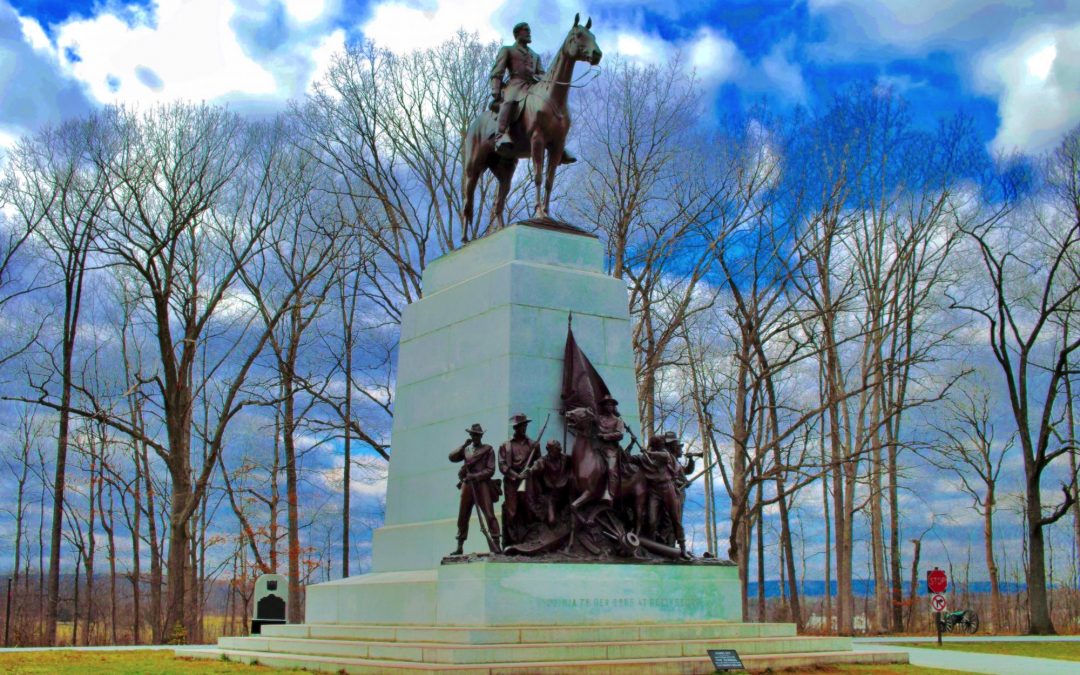 If you knew nothing about the U.S. Civil War and traveled to Gettysburg National Military Park, you might be forgiven for believing the South won, based on a reading of the monuments alone.

The statue of Southern commander Robert E. Lee on horseback, which also serves as the monument to the fighting sons of his home state of Virginia, stands at 41 feet tall, including both statue and pedestal. It’s more than double the height of the similar equestrian statue of Union Gen. George Gordon Meade that sits across the field, despite the fact that Meade was the victor at Gettysburg, helping to turn the tide of the war.

Lee’s prominence at Gettysburg, along with the estimated 1,700 Confederate commemorative works that still stand across the United States, is now under scrutiny. In recent years, the nation’s racist history has been debated and confronted in a variety of ways, with Confederate names and symbols being removed from public squares, schools, and flagpoles across the South and elsewhere. And yet, the Confederate battle flag is still hoisted aloft and visible in places like the 2017 Unite the Right rally in Charlottesville, Virginia, and at the U.S. Capitol insurrection last month, not to mention on countless car bumpers, t-shirts, and gift shop tables.

Last summer, Democratic lawmakers in the fiscal 2021 spending package included language that would have required the National Park Service to remove Confederate monuments from all National Park System sites within six months. Although that language didn’t make it into the final bill, it’s likely to be reintroduced this year.

At issue, too, is the crusty legacy of the “Lost Cause,” the mythologizing of the Southern warriors that recast them as fighting not to support slavery but to maintain states’ rights (overlooking, of course, that those “rights” included enslaving other human beings). Most of the Confederate monuments erected on national parklands were placed there in the early 20th century, well after the war, during the height of Jim Crow segregation. They are not interpretive historical markers, opponents say, but symbols of white supremacy and oppression. 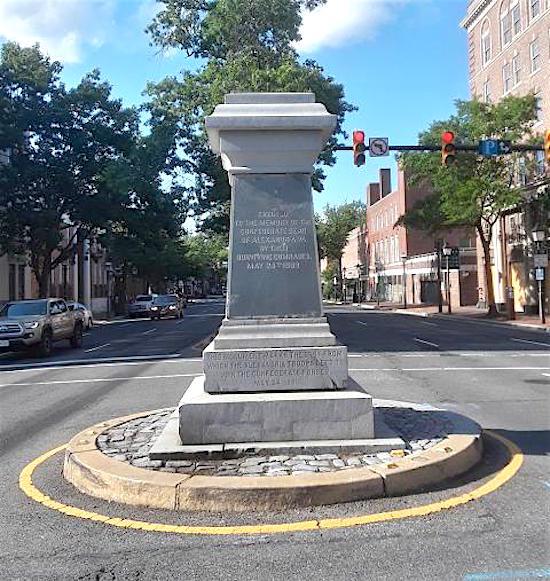 The pedestal of a Confederate statue that was removed last year from a prominent intersection in Alexandria, Virginia. / Ser Amantio di Nicolao

The National Park Service was a willing participant in this effort, allowing groups like the United Daughters of the Confederacy to sponsor monuments on its battlefields that helped to elevate and equalize the losing side. Hence, the existence of the Lee monument at Gettysburg, erected in 1917, and the Robert E. Lee Memorial, as his former home in Arlington, Virginia, is designated — despite the fact that Lee was an often-brutal slaveowner who took up arms against his own government.

“This is not about erasing history or denying anyone’s heritage,” said U.S. Rep. Betty McCollum, Democrat from Minnesota and a key advocate of the removal legislation, during a Congressional subcommittee debate last July. “This is about whether we’re willing to do the hard work needed to confront the truth of our history and to work to right past wrongs. In order to do that, it means ending the use of Confederate symbols which continue to be used today to intimidate and terrorize millions of our American citizens.”

McCollum isn’t sure yet what form the removal requirement might take, but she plans to support it, and she thinks the NPS is well positioned to move quickly. “As to whether or not I’ll do formal legislation, I’ll still be making sure I continue to work on removing these symbols of discrimination and oppression on public lands,” McCollum said in an interview with the Traveler. “People at the Park Service are smart enough and well-trained enough that they probably have a good idea what they have [in terms of Confederate monuments]. The people who work on our public lands — they are professionals. I’m sure many have been thinking about it already.”

Other park advocates argue, however, that the Park Service needs far more time to consider the monuments and their specific roles in their particular landscapes, noting that some monuments might be historically significant in their own right, perhaps because of the artist who sculpted or designed them or some other reason. The ground disturbance from monument removal could also trigger federally required archaeological assessments or other studies to discern impacts on the historic landscape.

“This is not an issue to be resolved by an act of Congress,” says former NPS Director Jon Jarvis, now the chair of the board for UC-Berkeley’s Institute for Parks, People, and Biodiversity. “There are literally thousands of monuments to the soldiers of the North and the South on the various Civil War battlefields maintained by the NPS. Many are important because they mark a particular battle, a skirmish, victory or loss, on the actual ground where people died. These monuments are used by the NPS staff in their interpretation of the events and are often important for context. That is very different from a bronze guy on a horse in the middle of a traffic circle placed there to intimidate.”

Jarvis encourages President Biden to request that Congress commission a study, led by prominent and diverse historians, to evaluate the monuments against a set of agreed-upon standards to help determine which ones get removed or put in some other context, such as a museum or warehouse.

“A better symbolic measure by Congress would be to direct the Park Service to complete an analysis of its monuments and report back in two years and then they would get to work on it,” Jarvis says. “What is needed to respond to those who were disenfranchised during the Civil War and during Reconstruction is a reinterpretation of the Civil War, and we stated that during the sesquicentennial. Rather than focus on taking down this or that monument…provide the platform for the telling of a broader story and to not respond to a quick fix.” 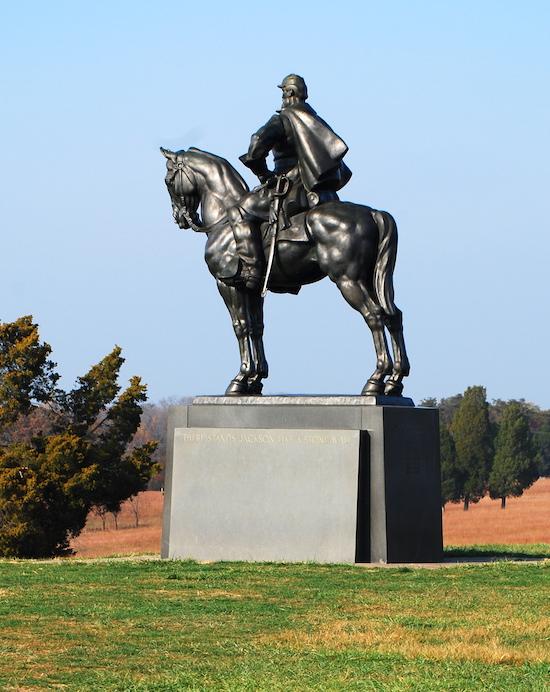 A statue of Confederate Gen. Thomas “Stonewall” Jackson long has stood on the battlefield at Manassas National Battlefield Park/Kurt Repanshek

Although the National Parks Conservation Association hasn’t released an official policy on this yet, the organization generally supports giving NPS the time and resources to assess its Confederate works. “We want the Park Service to have the opportunity to inventory their commemorative works,” says NPCA’s Mid-Atlantic Senior Regional Director Joy Oakes. “We want the professionals to have a thoughtful and informed process.”

NPCA Advisory Board member Edwin Fountain, a historic preservation expert, adds that some monuments, such as the Lee statue at Gettysburg, are more than 100 years old and are therefore considered “contributing features” on the historic landscape, to use preservation parlance. “So on what grounds do you just start saying, ‘Oh, we’re going to start removing contributing features from national parks.’ I’m not saying that ends all debate, but it’s got to be part of the debate.”

Others believe, however, that these symbols are keeping a significant segment of people away from these parks. It’s worth noting that only an estimated 7 percent of national park visitors are Black.

“The Park Service needs to ask, ‘Who’s coming to your site and who’s not coming to your site?’” says Denise Meringolo, a professor of public history at the University of Maryland, Baltimore County, and author of Museums, Monuments, and National Parks: Toward a New Genealogy of Public History. “Those monuments are a barrier to significant portions of the audience, for whom they are not simply inaccurate or annoying. They are traumatizing.”

Meringolo says that people should reconsider the prevalent assumption that monuments are permanent. “If a goal of a monument is to represent some kind of civic culture that we believe is worth discussing, and if we want to put up these things to represent common values, when someone says, ‘This doesn’t represent the values we hold dear,’ maybe it’s time to take them down. They’re not doing the work that we think they are doing. A monument is always an assertion of power and authority. It’s staking a claim.”

Historian and educator Kevin Levin, author of Searching for Black Confederates: The Civil War’s Most Persistent Myth, says it’s worth listening to those whose voices have long been silenced and to use this moment as an opportunity for more context and interpretation.

“Many of these monuments went up at a time when African Americans were simply disfranchised,” Levin says. “They were, for legal reasons, for political reasons, just unable to voice their own view about how the war should be commemorated in public spaces. And so I think for that reason alone, this has to be taken seriously. But at the same time, I draw a distinction between Park Service sites like Gettysburg and, say, Richmond’s Monument Avenue.”

Whether all or just some of the monuments stay or go, Levin believes there is enough NPS battlefield land to provide additional context about the Confederate monuments so that visitors can get a more complete picture of how and why they got there, and what their existence says about who we are.

“I do think there’s an opportunity at places like Gettysburg, acknowledging that the Confederate monuments are problematic to many people,” Levin continues. “The Park Service has a responsibility to face that.” 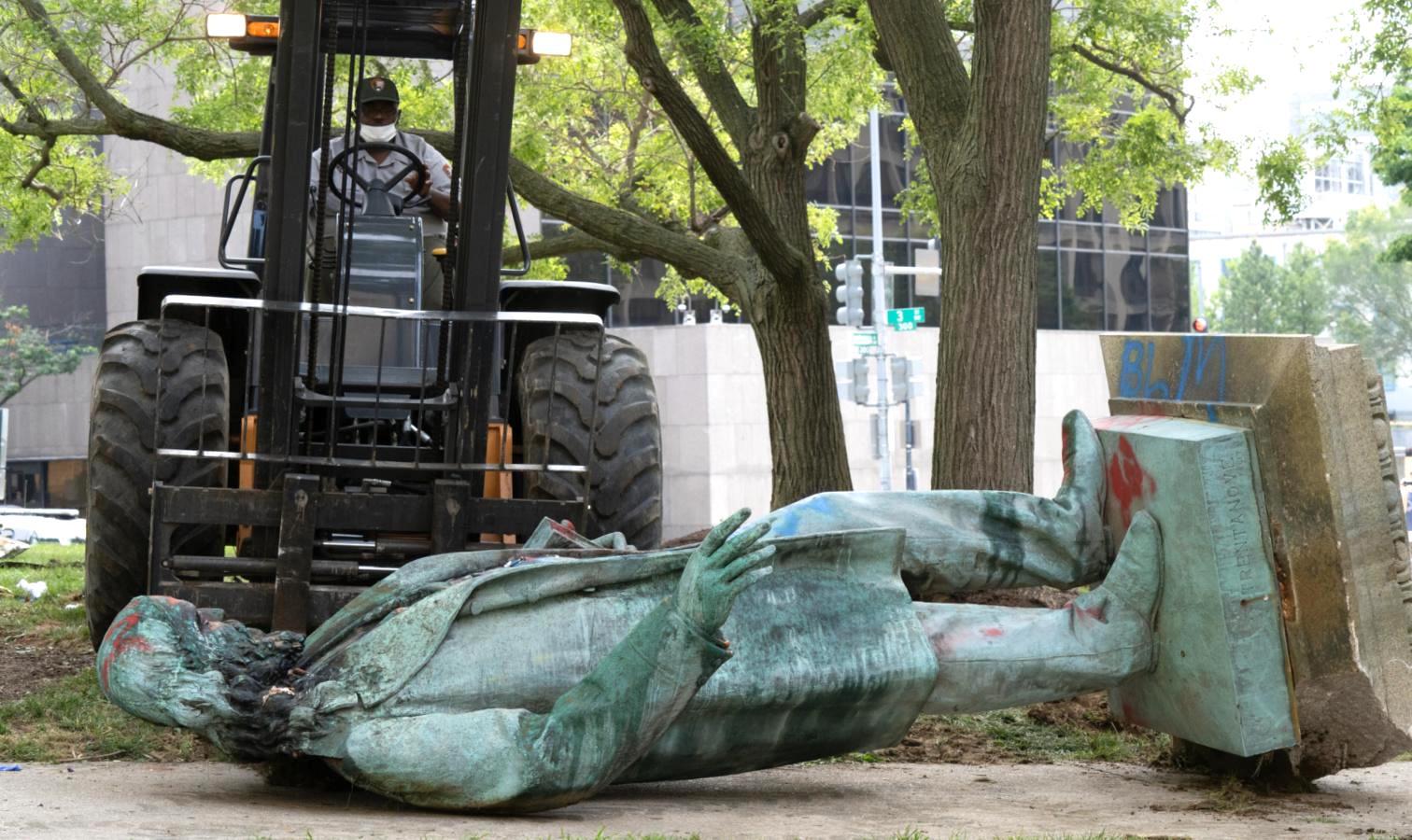 An NPS worker prepares to remove a statue of Albert Pike, once the only Confederate statue in a public square in Washington, D.C., after protesters toppled and burned it in 2020. / Victoria Pickering

National Parks Traveler is a 501(c)(3) nonprofit media organization. Each day we provide a range of editorially independent coverage of national parks and protected areas, ranging from stories about fee increases in the parks and wildlife issues to in-depth features exploring destinations in U.S. and Canadian parks as well as the latest science and exploration flowing from parks. If this coverage appeals to you, we invite you to join the groups and individuals who have invested to make this coverage possible.