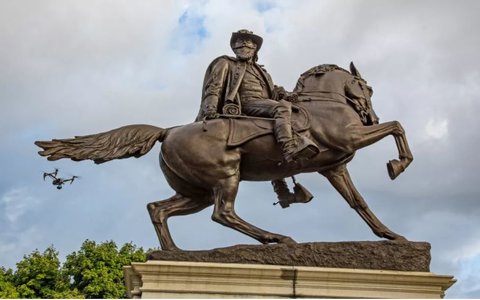 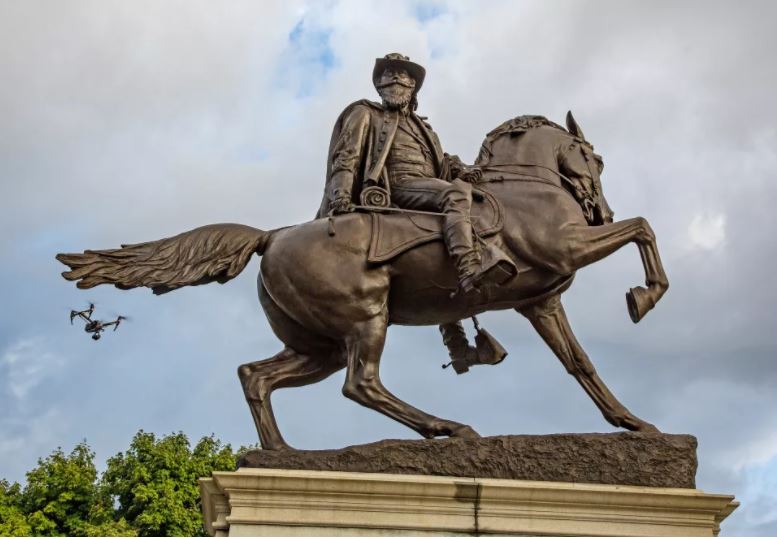 You can’t go far in Northern Virginia without being reminded of the Civil War: The historical markers confront you near the Bailey’s Crossroads Old Navy and the Burger King by what was at one time Springfield Station; they’re at the O&E Railroad Trestle on the local running trail and in front of what was the site of the Rose Hill farmhouse. Of the 47 Fairfax County historical markers, a quarter are Civil War-related. The Confederate flag remained on a specialty license plate for the Sons of Confederate Veterans—an organization of male descendants of Confederate vets—until it was removed in 2015. The plate now exists without the flag, although you can still get one bearing the image of Robert E. Lee.

Yet the ghosts of the Confederacy can seem to many like ancient history: Fairfax is about 53 percent white, 18 percent Asian/Pacific Islander, 16 percent Hispanic/Latino, and 9 percent black. The county leans Democratic; 65 percent of voters favored Hillary Clinton in 2016. It’s an area that is typically characterized as family friendly, if a bit suburban-bland. Residents take pride in the school system and its diversity. But relics of the Civil War linger throughout the Fairfax County Public Schools system, particularly in the names of some of the district’s schools, which honored Confederate soldiers.

Over 50 years later, however, many residents are balking at honoring Confederate war heroes. A recent FCPS school board decision to rename J.E.B. Stuart High School in Falls Church as Justice High School was seen by many as long-overdue. But what some see as progress in liberal Fairfax County, others saw as erasing the past. And the debate isn’t limited to FCPS. Across the country—even in liberal states like Vermont—schools with names and mascots linked to the Confederacy are grappling with bitter debates, lawsuits, and no clear rubric about how to move forward.

In Fairfax County, names like Madison and Edison high schools came from an era that honored the “prominent and deceased.” Naming schools after great, dead men, the logic went, would inspire and unite students. But even then, debate over the names was sprouting in the community. Lee High School was opened in 1960 and named for the district it occupied, leading one school board member to say he would “rather name a school Podunk than get into the battle like was over Lee High School.” This struggle prompted then-Superintendent W.T. Woodson to move away from geographic names, telling the Washington Post, “Gangs tend to develop in communities where there is controversy.” Names of distinguished historical figures seemed a more neutral option than neighborhoods.

One of those names was J.E.B. Stuart, a Confederate general known for his role in quelling John Brown at Harper’s Ferry and for his subsequent deft raids on behalf of the Rebel Army. Today, Stuart High School is noted for its international student body with “two-thirds of its students [coming from] from over 70 countries.” Many in this community felt that they could no longer accept a name that failed to reflect their culture. Driven by the racially motivated 2015 Charleston, South Carolina, shooting, students created a video about their desire for change, which quickly went viral on YouTube.

“The children felt like no one represented them,” says Jalissa Gary, a former Stuart High teacher. “[The students who made the video] wanted the school’s name to represent the school’s population.”

But the student-led initiative was not one that she and her colleagues were encouraged to support. Gary felt that the administration wanted to limit involvement; that debate trickled down to the student body as well, says Marley Finley, a recent Stuart graduate. “Dialogue on the topic was discouraged. Many students had no way to hear arguments from both sides or to get much information about the process.”

Instead, she and her friends created an email group of students who supported the name change, and used the listserv to encourage classmates to attend school board meetings and write to board members. But not all members of the student body were in agreement. Finley says she was acutely aware that a number of her classmates were unhappy with the movement, yet her own reason for supporting the name change was clear. “For me, it was about not honoring service to the Confederacy,” she says, while recognizing that, “for others, the fact that Stuart fought against the United States was also important.”

The campaign faced resistance from outside the Stuart campus as well. After the debate went viral, and famous alumni like actress Julianne Moore and producer Bruce Cohen joined the fight to rename the school by creating a Change.org petition that gathered 39,752 signatures promoting the name change, community members and school board members doubled down on their desire to maintain the status quo.

“I like JEB Stuard [sic] for what he stood for. Leave the school’s name alone,” wrote Floyd Ellis, a dissenting commenter on Moore and Cohen’s Change.org petition. “The Black citizens of our nation are erasing the history—good or bad in America—We believe their true aim is to pull America apart by any means possible,” wrote another.

Chris Bogert of Winchester, Virginia, wrote in his counter-petition. “Suddenly, history is under attack because of ignorance and misunderstanding, a dangerous pairing which leads to uninformed decisions and regretful changes. J.E.B. Stuart is a man who fought for his Country and the State of Virginia.” His effort attracted 74 signatures.

When the debate finally came to a vote last October, the FCPS school board voted seven to four in favor of renaming Stuart High to Justice High School. That change will go into effect the fall of 2019—though even that process has already proven to be contentious. “There were no set guidelines for how to go about changing the name of a school in FCPS,” says Gary, the former teacher. “So, there were lots of school board meetings and community meetings that went on through the 2016–17 school year. It felt never-ending.”

Gary, who now teaches at a different high school in Washington, D.C., is happy with the choice. “I think Justice High School really fosters what the school wants to embody. Global citizenship and being engaged learners of the global and local community.”

Finley, now an undergraduate at Yale University, also believes that the act of renaming sends a powerful signal. “I think it’s an important message for our community that the flawed legacies that people in positions of power enacted in the past will not continue. It declares a more inclusive community for everyone.”