Hot On the Trail of Tamales in the Mississippi Delta 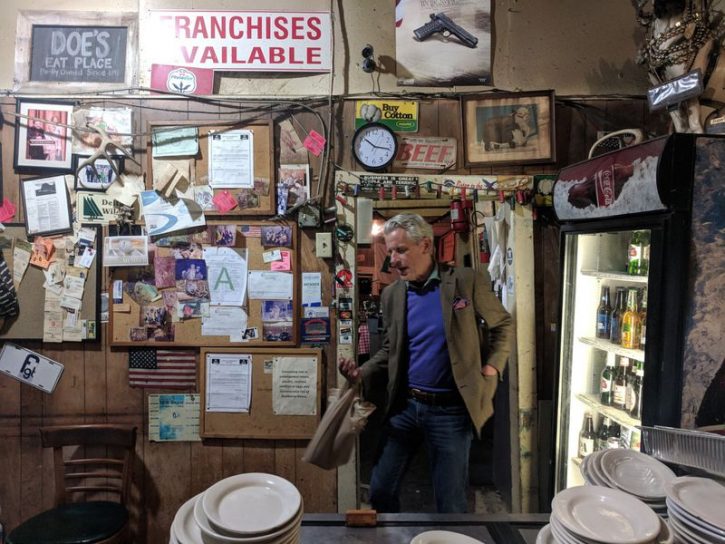 Stylist, designer and Delta Hot Tamale Festival regular Howard Christian in the front room in Doe’s Eat Place, a legendary restaurant in Greenville. Tamales, steak and salad on the side make up the quintessential Doe’s meal. (Alexandra Marvar/for the Chicago Tribune)

Similar to the Mexican version but pocket-sized, the Delta hot tamale is spiced cornmeal and meat, often pork, rolled up in cornhusk or parchment paper — portable, delicious and rich in history.

When Memphis, Tenn., native and Chicago restaurateur Eldridge Williams opened his Wicker Park bar and eatery, The Delta, in 2017, he wanted a theme evocative of his Southern roots, but something different and unexpected, too. Today, the menu is an homage to the Mississippi Delta hot tamales he grew up with.

“Who doesn’t like tamales?” Williams asked. “But no one really knows the significance tamales have in African American history and Southern culture. What I love most about hot tamales is the history.”

There are several theories about how tamales came to the Delta. But the most accepted one goes back to the early 20th century, when plantation owners brought migrant workers from Latin America to work in the cotton fields, joining a largely African American workforce of laborers and share croppers. 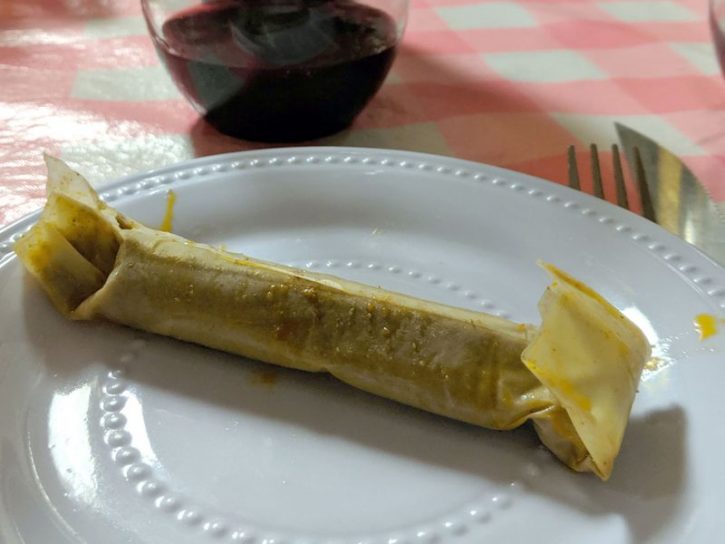 “Mexican workers would travel with tamales in coffee cans,” Williams said. “Other families working in the same cotton fields were introduced to tamales and started to develop their own recipes, passing that tradition down generation to generation.”

Recipes are closely guarded, and good tamales are a point of family pride.

“Most of the people we met who are great at what they do in the tamale game, they’re old and they’ve been doing this for decades after their parents and their grandparents,” Williams said. “Of course they’re not going to tell us their recipes, so we just ate our way through the Delta until we figured out what we were going to do.

“The Mississippi Delta is a hidden gem,” Williams added. “You get more than just good eating. You get amazing stories to go along with it.”

Just down the street from the famed Crossroads, where bluesman Robert Johnson is said to have sold his soul to the devil (before penning his 1930s ode to the hot tamale), you can find Hicks’ World Famous, 305 S. State St. Williams calls it “arguably the best tamale joint in the Mississippi Delta.”

At the Crossroads proper, Abe’s Bar-B-Q, 616 N. State St., no longer makes tamales in house. But it still serves the recipe the original Lebanese proprietor derived after falling in love with tamales from a local street cart in the ’40s.

Round out the night with live blues at Red’s, 395 Sunflower Ave., or at Delta native and actor Morgan Freeman’s Ground Zero Blues Club, 387 Delta Ave., where the tamales are served fried instead of boiled. And then call it a night at the Shack Up Inn, 001 Commissary Circle Road, a good-vibes-only makeshift village of reclaimed cotton shacks decorated with thrift store finds. 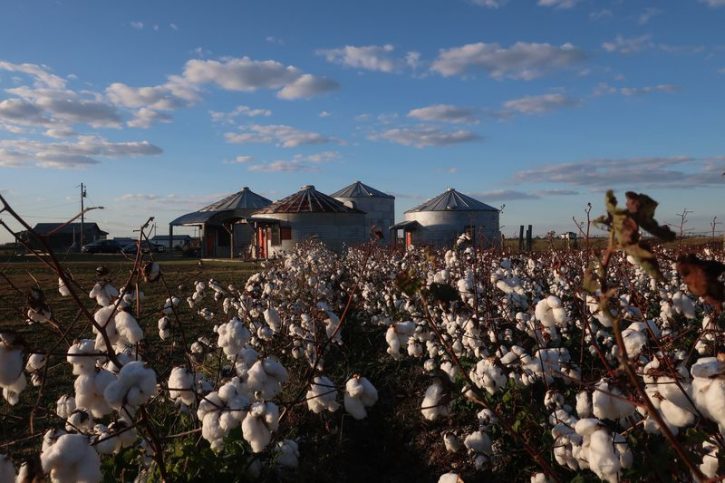 Cotton grows outside the Shack Up Inn in Clarksdale. The laid-back, affordably priced lodging has this caveat on its website: “Shacks are loved by artists, musicians, writers and just plain cool folks … if you think you might not like one then do yourself, and us a favor and don’t book one.” (Alexandra Marvar/for the Chicago Tribune)

Halfway between Clarksdale and Greenville is Cleveland, which debuted its $18 million Grammy Museum in 2016. Less polished sites such as Dockery Farms, 229 Highway 8, an old cotton plantation that claims to be the birthplace of the blues, are just as sacred, if not more so, to music pilgrims, history buffs and locals.

You’ll find tamales at the rustic billiards-and-blues bar Airport Grocery, 3608 Highway 61. And if you swing by James Beard Award semifinalist Cole Ellis’ Delta Meat Market for breakfast, lunch or bustling Friday happy hour, you can find them vacuum-packed to take home. The grocery store and restaurant are conveniently located in the Cotton House hotel, 215 Cotton Row.

Whether at Scott’s Hot Tamales, 304 Highway 1, Hot Tamale Heaven, 1427 Highway 1, or a number of other spots around town, tamales are easy to find in this city of 30,000. In fact, it’s the self-proclaimed Hot Tamale Capital of the World.

In an old, wooden house on the former blues thoroughfare of Nelson Street, seek out Doe’s Eat Place, 502 Nelson St., winner of myriad culinary accolades and often called one of the country’s best steakhouses. The James Beard Foundation named it one of America’s Classics. Despite these titles, it’s unassuming and unpretentious. The scent of grill smoke hangs in the air, and the odd retired steak knife might be found leveling uneven furniture. Tamales, steak and salad on the side make the quintessential Doe’s meal. “And let’s just say it has tons of character,” Williams said. 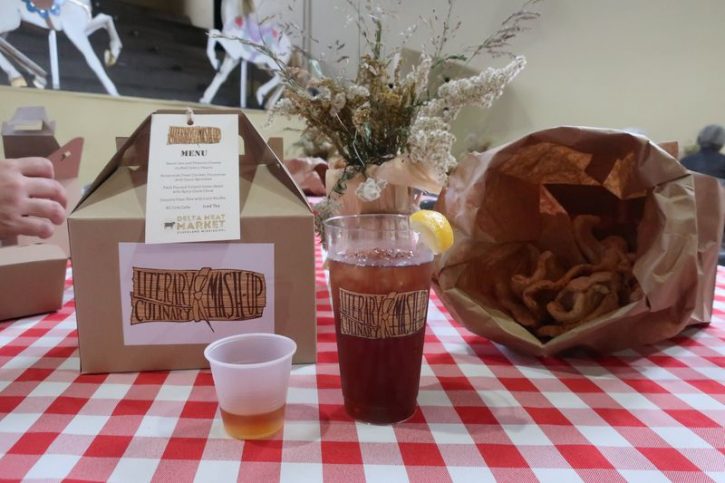 Plan ahead for the Delta Hot Tamale Festival the third weekend of October, when dozens of hot tamale makers come from hundreds of miles around to compete in a variety of categories. Other highlights include a hot tamale-eating contest.

In this town an hour southeast of Clarksdale, Giardina’s, 314 Howard St., has been hosting Deltans for fine dining since the mid-1930s. In addition to the beloved steaks and fresh fish, try the baked oysters, homemade Italian sausage and, of course, hot tamales.

At The Crystal Grill, 423 Carrollton Ave., tamales are a great opener to fried quail, chicken livers and meringue pies. And Steven’s Bar-B-Q, 208 Fulton St., is a classic meat-and-three (pick your meat and two traditional Southern sides) with hot tamales on the menu and, weekly, hot tamale pie.

If you head back north to Clarksdale from here, you’ll pass through Money, Glendora, Sumner and Tutwiler, towns full of blues and civil rights sites. More tamale-tasting opportunities can be had by following the Southern Foodways Alliance’s map to eateries in Rosedale, Yazoo City and Vicksburg.