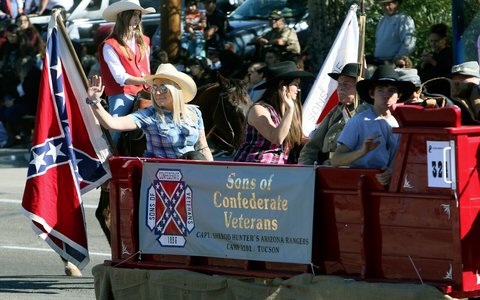 Last month, the debate over the public display of Confederate flags and monuments boiled over in Tucson, when city council member Lane Santa Cruz pushed the town to ban the Confederate flag, which had been carried by the Sons of Confederate Veterans, from the city’s annual Rodeo Parade. Mayor Regina Romero agreed, issuing a statement asserting that “the flag has no place in the rodeo parade or elsewhere in our community.”

To most Americans, Arizona seems as far from the battlefields of the American Civil War as one can get. 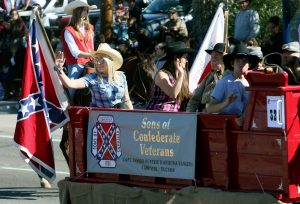 People wave from the Sons of Confederate Veterans float during the Tucson Rodeo Parade on Feb. 20.
Image without a caption

But it was in the first year of the Civil War that what we think of as Arizona came into being — as a Confederate territory. In fact, Confederate actions in the Far Western theater of the war reveal the extent to which the Confederate flag became a symbol of white supremacy and conquest.

In the spring of 1861, the allegiance of many communities in the Far West were in doubt. Mining towns throughout the region were filled with both Northerners and Southerners. After Fort Sumter, physical fights broke out at flagpoles in places such as Denver and Taos, N.M., as miners struggled to raise either the Union or Confederate flag.

Countless groups had reason to reject the Union and join the Confederacy. Mormons in Utah had launched a rebellion against the U.S. government just a few years before. Hispano New Mexicans had been citizens of the United States for little more than a decade. Hundreds of indigenous groups had been fighting U.S. Army soldiers and white settlers invading their lands since the 1840s. Both sides waited to see what they would do.

The Confederacy hoped to use these uncertainties and the economic promise of the West to its advantage. Henry Hopkins Sibley, a career U.S. Army officer who had resigned to join the Confederacy in April 1861, crafted a plan to invade the West from Texas and occupy it. He figured he could bring 3,000 Texans into New Mexico Territory, which at the time extended from the Rio Grande to the Colorado River. His soldiers would sack federal forts with the help of Hispano and Native allies and then march to the Pacific.

California was the goal. Its gold mines would help finance the Confederate war effort, and its deepwater ports would enable Confederates to avoid the Union blockade in the Atlantic and export their cotton. From there, the Confederates could move into other parts of the Mountain West and occupy those states and territories. The West would become a vibrant economic center of a continental Confederacy. And after their victory over the Union, Confederates would expand their empire of slavery into Mexico, where black slavery had been abolished in 1829, and Latin America.

By late July 1861, the vanguard of Confederate Manifest Destiny arrived in New Mexico Territory. A lawyer and rancher named John Robert Baylor led 350 soldiers from the 2nd Texas Mounted Rifles across the border, occupied the town of Mesilla and forced the surrender of 400 soldiers at Fort Fillmore, the Union’s southernmost military installation in New Mexico.

On Aug. 1, 1861, Baylor sat down at his headquarters in Mesilla and, putting pen to paper, created the Confederate Territory of Arizona and appointed himself its governor. Confederate Arizona’s borders were somewhat different from today’s; its northern border was the 34th parallel in central New Mexico, and it extended west to the California border. It was the first — and only — territory to join the Confederacy during the Civil War.

Once Sibley’s troops arrived in Mesilla from Texas in early January 1862, Baylor began to plan for the Confederacy’s march to California. In February, he sent a company of Arizona Rangers to Tucson, a secessionist stronghold since before the Civil War began. Although Hispanos and Native peoples in New Mexico did not respond to the Confederacy’s overtures, Baylor felt confident that Tucson’s residents would welcome these Arizona Rangers with open arms.

They did. In March 1862, Sherrod Hunter, the Rangers’ commander, occupied Tucson and raised the Confederate flag in its plaza. He sent riders west to fight Chiricahua Apaches and to recruit secessionist Californians into the Confederate Army, but soon they encountered an advance guard of Union troops known as the California Column. Led by James Henry Carleton, the Column was marching east from Los Angeles to help the Union troops along the Rio Grande. The Confederates rode hard back to Tucson and told Hunter that a large Union army was on the move toward their position.

By April, Hunter abandoned Tucson and, with it, most of the Confederate Territory of Arizona. By the following June, the California Column had retaken Tucson. After several battles with Union troops in New Mexico, Sibley’s troops had been pushed back to Texas. The Confederates’ campaign for the West, and their dream of a slaveholding empire, was over.

From that summer onward, Tucson became a vital supply depot for the Union troops operating in Arizona (which became a Union territory in February 1863, with the borders we know today) and New Mexico. By this time, the Federals had turned to fight their other enemies in the region: Apaches and Navajos.

During the first year of the Civil War, the Confederate flag did fly in Tucson, and over much of what would become Arizona. But it did not symbolize an adherence to states’ rights and the bravery of soldiers, as the Sons of Confederate Veterans in Arizona try to argue to defend the flag’s prominent place in the Rodeo Parade.

Instead, it was a symbol of Confederate ambition, of a dream of expanding slavery to the Pacific. That dream could be realized only through a campaign of territorial conquest, one that was ultimately intended to eradicate and enslave indigenous peoples in the American West.

Responding to Santa Cruz’s and Romero’s criticism, the Tucson Rodeo Parade Committee recently agreed to ban the Confederate flag. However, it will allow a different Confederate flag to be flown as part of the Color Guard, arguing that the Guard displays flags of every government entity that once governed Tucson. This is the wrong decision. This Confederate flag is also a symbol of white supremacy, and the violence that Confederates enacted — and dreamed of enacting in the future — to secure their dominion across the continent.