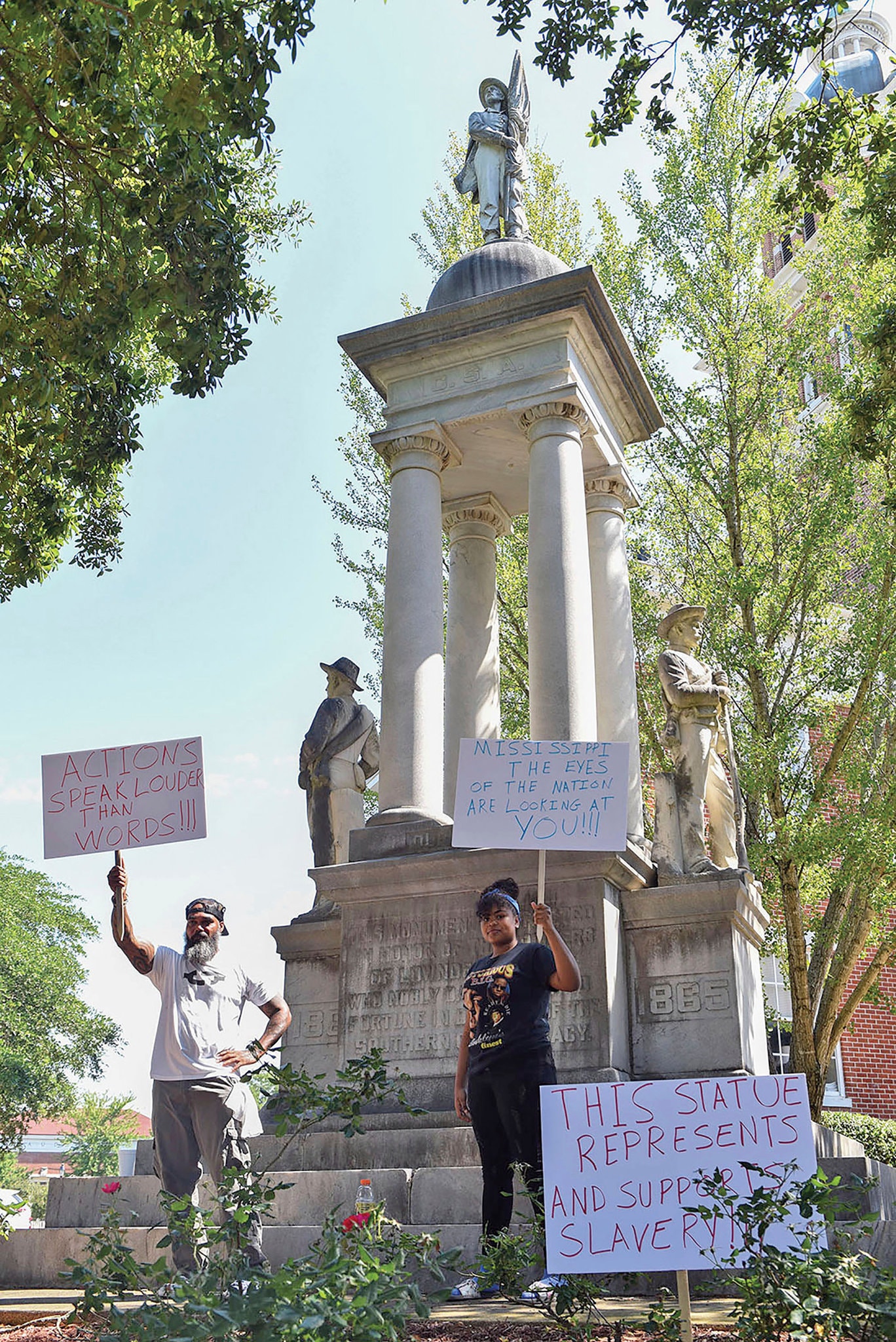 John Lewis and Sonniah Ramirez, 12, protested on Monday for the removal of the Confederate monument on the Lowndes County Court House lawn in Columbus, Miss.Credit…Claire Hassler/The Commercial Dispatch, via Associated Press

The anger after George Floyd’s death is fueling a national movement to topple perceived symbols of racism and oppression, including calls to bring down monuments in rural places like Columbus, Miss., where on Monday county officials voted to keep a monument to Confederate soldiers on the lawn in front of the city courthouse.

Activists have renewed their efforts in recent weeks to remove the monument, which was erected more than a century ago. Demonstrations have also protested the decision last month by the state attorney general not to prosecute an officer who had been indicted in the killing of an African-American man in 2015. And a push to change the Mississippi flag, which has the Confederate battle emblem, has gained new momentum.

“It’s commemorating and celebrating a lost battle — I don’t understand,” David Horton, an activist in Columbus who has been involved in all of those efforts, said on Tuesday. “These are things I have to endure all my life as a young African-American man living in Mississippi. It’s always made me feel inferior, it’s always made me feel like I shouldn’t hold my head up.”

Many in Columbus were incensed by comments made to the local newspaper by a white county supervisor who voted against moving the monument. He said that African-Americans had remained “dependent” since slavery.

“In my opinion, they were slaves, and because of that, they didn’t have to go out and earn any money, they didn’t have to do anything,” the county supervisor, Harry Sanders, was quoted as saying. “Whoever owned them, took care of them, fed them, clothed them, worked them. They became dependent, and that dependency is still there. The Democrats right here who depend on the black vote to get elected, they make them dependent on them.”

Trip Hairston, another white county supervisor who also opposed moving the monument, said he was trying to strike a more nuanced position. He said the state flag ought to be changed because “we need a flag that represents all the people,” but he was resistant to moving the monument because he said it represented the area’s history, even if some of it was ugly.

In some ways, Mr. Hairston said, the debate has been good for the community because it has forced people to reckon with the past and confront fixtures of another era that had essentially been hidden in plain sight.

“I think it’s an opportunity to have conversations we haven’t had before,” he said.