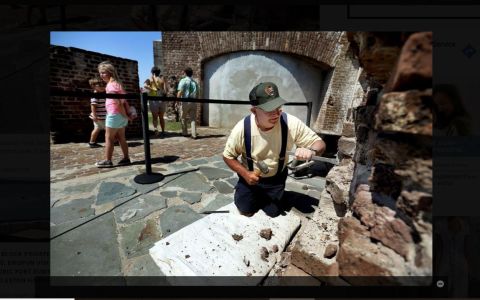 Tim Stone spreads his hands defenselessly on top of the wall of Fort Sumter that faces the Charleston shipping channel. This wall withstood cannon bombardment from Fort Moultrie and offshore warships, a landmark of American history.

“It could fall as we stand here right now,” the fort’s National Park Service superintendent said.

On the 100th anniversary of the national parks, they, like their state counterparts, are in dire straits — more than $12 billion behind in maintenance and operating on a $3 billion budget. That’s even though the parks nationwide brought in 307 million visitors in 2015 and generated $32 billion in economic activity, according to the federal Department of the Interior.

National parks, like state parks, are underfunded and consequently understaffed, falling behind in maintenance, pressured by government leaders to pay for themselves to operate.

The three national parks near Charleston — Fort Sumter, Fort Moultrie and the Charles Pinckney National Historic Site — are cumulatively more than $10 million behind in maintenance. The backlog statewide is more than $235 million.

In 2015, the three sites attracted 887,707 visitors and brought in more than $5 million in revenue on a total $2 million budget, according to Department of Interior figures. They had a $64 million impact on the local economy.

“What folks in government don’t do very well is differentiate investment from consumption,” said U.S. Rep. Mark Sanford, R-S.C. “We have to be careful not to give away the farm. Everyone has to take part — concessionaires, users. It can’t be just the taxpayer. (But) we have to reinvest. This is stuff that, in some cases, if it’s gone, it’s forever gone.”

There’s been some new attention amid the anniversary celebrations. The Charleston-area forts technically aren’t parks; they are historic sites. U.S. Sen. Tim Scott, R-S.C., just introduced a bill that would combine the two into the Fort Sumter and Fort Moultrie National Park, which could draw more funding.

Stone rode out to Sumter recently on a filled-to-capacity ferry, which returned them to the launch and a capacity number of tourists waiting for the next trip.

The fort is in dire need of a breakwater, he said. The granite boulders set up at the fort as riprap during earlier channel work were piled against the wall, trapping seawater and threatening to undermine it.

The wall very well could fall once the harbor deepening is finished and larger containership traffic brings larger wakes crashing into the riprap. The breakwater cost would be $3 million.

That’s not all. A tonnage-size chunk of the bricks underpinning one of the cannon casemate arches recently collapsed into the parade ground, just one section of a gun emplacement wall where bricks regularly are coming loose and tumbling.

Unless it’s shored up, it could start a cascade of already weakened bricks coming apart and spilling out, dropping the arch and eventually the entire gun-emplacement wall.

“The structures are certainly ruins. However, it’s going to become a complete ruin with this underpinning missing,” said park service historic mason Petey Bender. Emergency repair to the underpinning alone could easily cost $100,000.

Those are among critical needs. But the fort’s maintenance backlog extends to the lifts carrying visitors from one level to another, which haven’t been usable for three years. The visitor walkways are cracking. They were built from the 1960s through the 1980s, and haven’t been funded for significant work since. Crews shore them up with spot repairs and patch them with sand.

Then there’s vandalism, a lot of it just careless visitors yanking on something they shouldn’t, like the loose bricks.

“We’re at that point where we’re struggling,” Stone said. “We don’t want to cry poor. But at some point, if you lose Fort Sumter, what do you have left?”