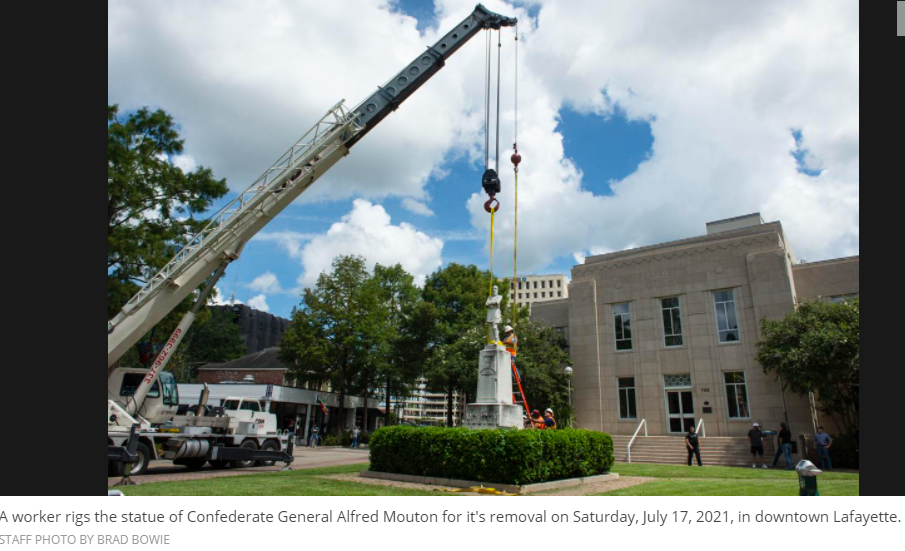 After standing nearly 100 years in downtown Lafayette, and serving as a flashpoint for local discussions around racial equity and justice for years, the statue of Confederate Gen. Alfred Mouton was whisked from its pedestal to the sound of spectators’ cheers and applause Saturday.

The parties agreed the city will bear the cost of removing the statue and transporting it to a new location secured by the Daughters, as well as costs to design and construct a new statue base and cover some insurance. The Daughters have 45 days to make the arrangements and notify the city.

Lafayette Mayor-President Josh Guillory said the statue’s removal creates an opportunity for healing in the community. He said he’s never “been more proud to be the mayor-president” and praised the community for having trust in the legal process rather than forcibly removing the statue. Once the legal hurdles were clear, he said it was important to him to act quickly to remove the statue from its place of prominence.

A group of residents led by Move the Mindset leader Fred Prejean launched a lawsuit in 2019 seeking to undo a 1980 permanent injunction that prevented the city from moving the statue except if the land was sold or road work was impeded by the statue’s location. Guillory instructed Lafayette Consolidated Government to fight to remove the statue in July 2020.

The statue was placed at the corner of Lee Avenue and Jefferson Street in 1922, when the United Daughters of the Confederacy commissioned the statue and donated it to the city. Mouton was a member of one of Lafayette’s founding families and a slave owner who died while fighting for the Confederacy in the Civil War. His statue was erected in the Jim Crow era, a time of racial segregation, Black oppression and violence toward Black people.

“This was put up 60 years after Alfred Mouton died and it wasn’t put up to honor his fight for the Confederacy or his service. It was put up to intimidate an entire class of people,” Guillory said.

Prejean said he was thankful the city government warmed to his group’s activism and recognized the hurt the statue caused, especially for the city’s Black residents. He said seeing the statue come down Saturday was especially sweet because of the timing: Saturday was the first anniversary of civil rights activist U.S. Rep. John Lewis’ death.

Prejean posed for a photo before the statue as it lay on a truck bed, his fist raised in victory. He said the moment felt just as sweet as he imagined.

“It’s been a long road to walk, sometimes tiring and sometimes very lonely, but we have gone the distance and I’m very proud to be here today to see the conclusion of our efforts,” Prejean said.

Guillory said the city contracted with CDH Crane Rentals in Scott to transfer the statue to a secure storage facility, whose location was not released, until the Daughters solidify plans for the statue’s future. There was little talk of what might take its place, but Guillory said they’ll be looking to make drainage improvements at the oft-flooded corner. Prejean said he’s excited for people to pass the street and be able to enjoy the statue’s absence.

“I think people are going to say to themselves at one time there was something evil there that represented the division in our community and now it represents freedom,” Prejean said.

There was a bevy of local religious leaders on hand to celebrate the statue’s removal and offer prayers for reconciliation and growth. Diocese of Lafayette Bishop J. Douglas Deshotel, who supported the city’s intervention in the lawsuit, prayed the statue’s former site can be a place of peace for the community.

Deshotel and the Bishops of Gethsemane Church of God in Christ Alton Gatlin and Vanessa Gatlin spoke on themes in the First Letter of John, recognizing that Christian teachings say no one can love God who hates their brother.

“We’ve come today to renew that thinking that we’ve all been created by Him and that we may walk together hand in hand,” Vanessa Gatlin said.

“Help us today to stand as one, to walk as one, to believe and stand united as one,” Alton Gatlin said in prayer.

Alex “PoeticSoul” Johnson, a local spoken word artist and activist, said seeing the Mouton statue’s removal reaffirmed her belief that Lafayette is a place of diversity and diverse people who come together as family. The statue’s removal is a jumping off point for future conversations probing issues of equality in Lafayette. The poet said conversation is the tool to find common ground and heal historical divisions and turmoil seeping into the present.

“We can see where our weak areas are and where we need to strengthen our foundation…It’s supposed to be uncomfortable. Healing is not always a comfortable feeling. You’re going through the moments of what it takes to get to a point where you feel better,” Johnson said.