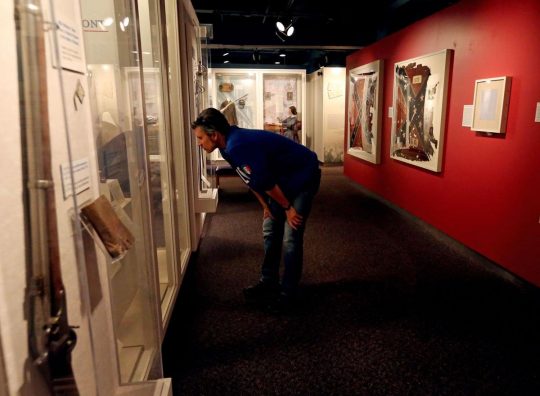 South Carolina’s oldest military history museum is no different. But the Columbia attraction is all but excluded from a key funding source: corporate donations, because of one word. 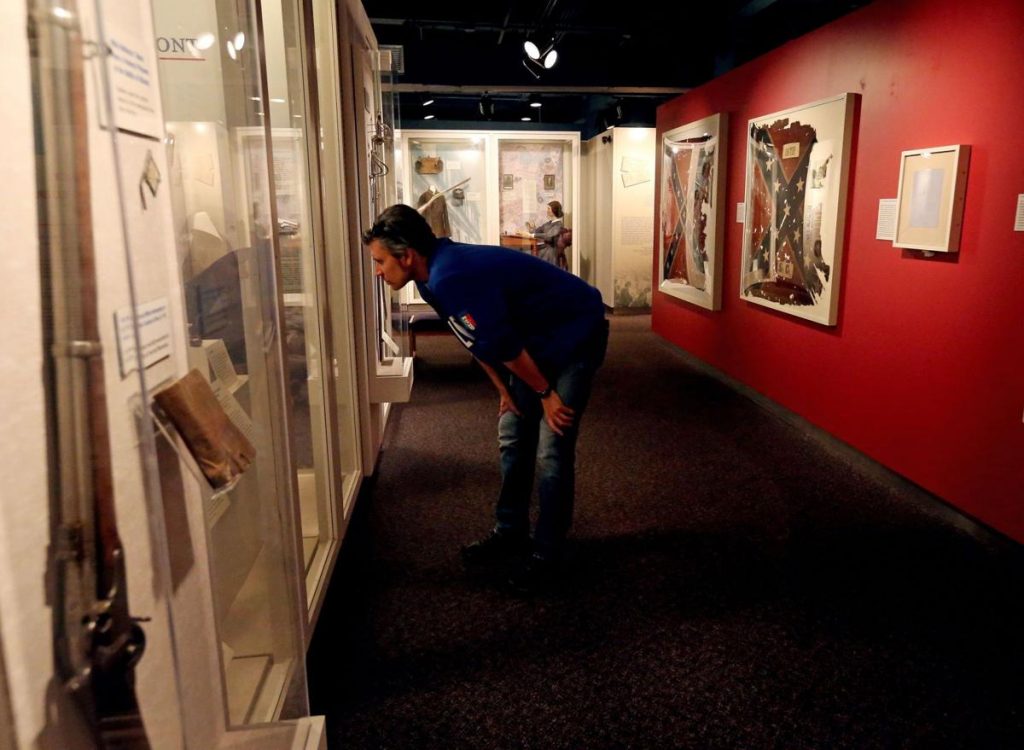 Seth Adam Meinero visits the Confederate Relic Room and Military Museum in July 2015 during his visit to the state from Washington. File/Grace Beahm Alford/Staff

The South Carolina Confederate Relic Room and Military Museum cannot raise corporate money because the “Confederate” in its name is too controversial for potential donors, museum director Allen Roberson said.

The museum had some high-dollar South Carolina-based corporate sponsors but that was a decade or more ago.

Relic Room commission members discussed including a possible name change that would remove “Confederate” in paperwork seeking re-accreditation from the American Alliance of Museums during a meeting last month.

“It would be tone-deaf not to recognize (the name) has issues,” Roberson said at the meeting.

The museum is financially sound, but with the majority of its funding going to operations, little is left for special exhibits and expansion that the museum desperately needs.

This has forced the museum leaders to get thrifty. They needed three years to save enough money for an exhibit on the Vietnam War that will debut in September, Roberson said.

A name change is outside the Confederate Relic Room’s own control.

The Relic Room’s name is handled by the Legislature. Lawmakers previously tacked “military” onto the name by adding a line to the state budget in 2006 after former Sen. John Courson toured the museum and recognized it covers the state’s role in all American conflicts beyond just the Civil War.

But changing the name could be more complicated this time.

Taking out the word “Confederate” could trigger the state’s Heritage Act that requires a two-thirds vote in both the House and Senate to rename historical monuments, streets and buildings.

Lawmakers had to overcome the requirements of the Heritage Act to remove the Confederate flag from the Statehouse grounds after the racially-motivated 2015 Emanuel AME Church massacre in Charleston. The last flag flown at the Statehouse is on display in the Relic Room as required under state law.

Senate Majority Leader Shane Massey, R-Edgefield, said he would be surprised if the Relic Room’s name fell under the Heritage Act.

State Rep. Bill Whitmire, a Republican from Walhalla who heads the budget subcommittee that oversees Relic Room funding, expects a budget line would be used again to change the museum name.

He said the disparity in beliefs about the Confederacy in the Legislature makes it hard to answer how a name change would fare.

“I know there would be some people in the Statehouse not too happy about it and people who some would be for it,” he said. “There would definitely be some questions asked.”

Senate President Harvey Peeler, R-Gaffney, raised doubts: “I don’t know that there would be an appetite to change the name.”

The history of the Civil War in the state that first seceded from the union is complex. The Confederacy remains popular in sizable pockets of the South despite efforts in other parts of the country to remove divisive Civil War symbols.

Some Relic Room leaders are concerned having “Confederate” in the name hinders progress made with a recent upswing in visitors that fell after the recession and flag controversy.

As the museum’s governing board tries to maintain that upward momentum, members have made the name part of the conversation. The museum represents a much larger slice of state history — stretching from the Revolutionary War to the conflicts in Iraq and Afghanistan.

Relic Room commission member Neal Truslow said during a meeting in October that few companies are willing to risk angering shareholders or customers by putting their brand behind an entity linked in name to the Confederacy and battle over slavery.

Taxpayers cover a bulk of the Relic Room’s annual costs.

The museum received $1.3 million in its most recent state appropriation. Admission tickets brought in $29,356 and $32,041 came from gift shop sales last year. 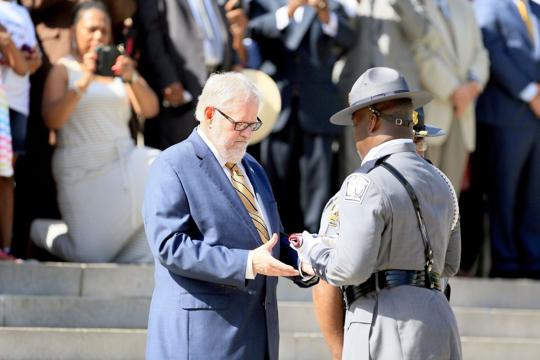 Confederate Relic Room and Military Museum Director Allen Roberson (left) accepts the last Confederate flag flown at the S.C. Statehouse during a 2015 ceremony. The museum was required to display the flag as part of the law removing it from the Statehouse. File/Staff

Some private donations come in through a foundation, but the museum has just $9,000 in the bank from contributors, Roberson said.

By comparison, the South Carolina State Museum next door brought in $160,500 through its foundation in 2018-19 from corporate donations. This accounts for just under 10 percent of funds raised by the State Museum.

Getting money from individual donors could get harder.

The 2017 Republican income tax reform raised the standard deduction for most taxpayers, making itemization of expenses on returns less lucrative, Marsh said. That took away the incentive for charitable giving by individual taxpayers and is expected to affect museums and other nonprofits.

That’s why corporate donations are so important to museums.

“With corporate sponsorship, you can get a larger amount of money but there are often more strings attached,” Marsh said. Donors often only want to sponsor a specific event or exhibit, she said.

The word “Confederate” is a problem in getting that money, Marsh said.

“In the current climate, they are in many ways they’re handicapped by the name of their museum,” Marsh said.

Grappling with shrinking visitorship and money is particularly acute for history museums, said Lynn Robertson, a former director of the McKissick Museum on the University of South Carolina campus and former interim director of the Columbia Museum of Art.

“Their funding is down and it’s a national discussion how to make history more attractive,” she said.

The Relic Room has actually bucked those trends and is on a bit of a rebound.

Visitors fell by nearly 25 percent to 20,782 as the full effect of the Recession was felt in 2009-10. Visitation rebounded to 24,694 four years later, only to fall 20 percent right after lawmakers moved the Confederate flag from the Statehouse.

Visitor numbers bottomed out at 18,619 people in 2016-17 but reached pre-flag controversy levels last year and are on the same track this year. The museum also is re-upping the size of its staff to seven full-time employees.

Robertson said the recent attendance spurt is a mark of a healthy museum.

But that doesn’t end the struggle, said Robertson, who is aiding the Relic Room with strategic planning and re-accreditation by the American Alliance of Museums.

“Museums are at risk and that risk can be subtle, sort of a death by 1,000 cuts,” she said, from cost-shaving reductions in staff to inability to put on a new exhibit. “Over time these things can accumulate.”

Roberson’s vision for raising funds is to revamp the museum’s dormant membership program, lean more on its foundation and to split costs with other museums by partnering on traveling exhibits.

He told board members there is no immediate plan for action on enacting a name change.

“We need to move forward,” he said during the commission meeting.