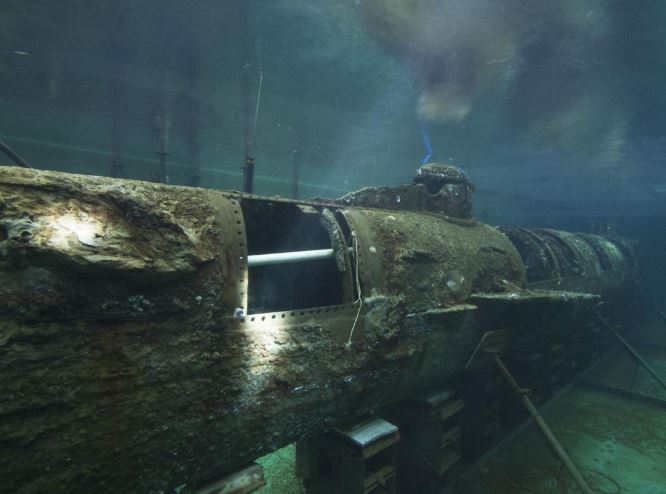 A broken pipe may have sunk the Confederate submarine Hunley, researchers now say. File Photo/Friends of the Hunley

That’s the latest discovery by the Clemson University conservators working to restore the doomed vessel.

The scientists found a roughly 1-inch gap where the pipe should have been mounted on the side wall of the submarine.

If the pipe broke off the night of the Hunley’s historic mission, it may have contributed to the sinking of the sub and the loss of her crew, according to an announcement Monday by the group Friends of the Hunley.

The intake pipe was meant to fill the forward ballast tank with water.

Because the hull is rounded, the pipe had to be forced into position, so it was under pressure from the beginning, said Clemson University Archaeologist Michael Scafuri.

“You pushed it up and then locked it in place,” he said.

Still, the find does not solve the mystery that has haunted the historic sub for more than 150 years: Why did the crew not make it back to shore?

The hand-cranked 40-foot-long Civil War craft became the world’s first successful attack sub by sinking the Union blockade ship Housatonic off Sullivan’s Island on Feb. 17, 1864. The Hunley rammed a powder explosive into the Housatonic’s hull, detonating in a massive explosion.

While the crew signaled they planned to return by reportedly flashing a blue lantern light toward shore, they never appeared.

The sub with crew remains inside were found and later recovered four miles offshore in 2000. The crew was buried at Magnolia Cemetery in Charleston.

Researchers are still trying to determine what happened or if the pipe began spewing water into the cramped compartment.

“There are no signs of panic,” Scafuri said, no evidence that anyone tried to jam something in the pipe to clog the spill, or empty ballast to counteract it.

“If this happened the night of the attack, how come no one responded?” he said.

One way or another, the pipe is a major new clue. It would take only 50 to 70 gallons to sink the sub, said researchers at the University of Michigan, who partnered with Clemson and the Office of Naval Research on the Hunley investigation. The pipe could have disgorged that in only three minutes.

“Unfortunately, there are no easy answers when investigating what led to a complex 150-year-old sinking. Still, (the pipe) is a very significant discovery that will help us tell the full story of the Hunley’s important chapter in naval history,” Scafuri said.

The find came as the researchers cleared away the last of the concretion, a rock-hard crusting of accumulated sand, shell and organisms, from the inner and outer walls of the sub.

Among other recent discoveries with the concretion removal:

The concretion removal involved at least two years of physically demanding work by conservators curled up in the confines of the crew compartment and taking care not make mistakes or drop tools that would damage anything.

The removal “was a slow and challenging task for all of us involved,” said Johanna Rivera-Diaz, a Clemson University conservator spearheading the project. “But the ability to get an up-close look at the true surface of the submarine after all this time has made it entirely worth it.”

Now mostly cleaned, the sub will sit in a conservation bath for about five years to preserve the metal and ready the vessel for permanent public display some day.