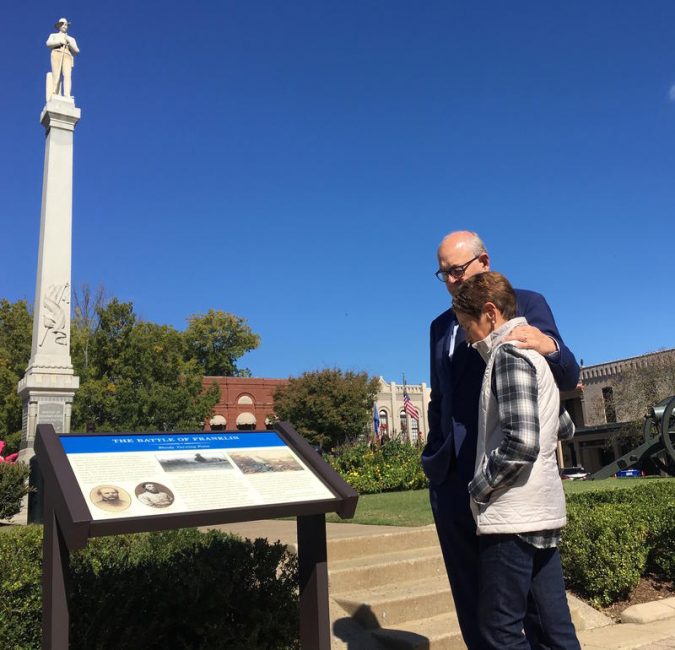 Public commemoration of Franklin’s past got a little fuller this week, after five markers detailing the city’s African American history were unveiled near its most prominent Confederate statue.

More than 200 people gathered for the event Thursday in front of Franklin’s historic courthouse, across the street from the public square. There, city and faith leaders took turns calling this a historic day, for Franklin and the state.

That’s the name of the project spearheaded by Williamson, two other pastors and the CEO of the Battle of Franklin Trust. They say the five historical markers — in front of the courthouse and on the square — are the beginning of a “fuller story” about the city’s Civil War legacy.

That includes the fact that slaves were sold in the square and honoring the more than 180,000 African-Americans who fought in the Union Army.

The local chapter of the Daughters of the Confederacy had pushed back against the markers in the square, which is actually a circle in the middle of the downtown roundabout. The group argued that land and its nearly 40-foot tall statue topped with a Confederate soldier should commemorate only the Battle of Franklin.

But the Rev. Hewitt Sawyers, who remembers when the courthouse had black and white drinking fountains, says their project shows there’s room for more than one side of history.

“You don’t necessarily have to tear down these Civil War replicas that other places are wrestling with right now,” says Sawyers. “You can just put up the rest of the truth.”

The project leaders are now working on a statue of an African American Union Army soldier for the square. They hope to be back a year from now, for that unveiling.