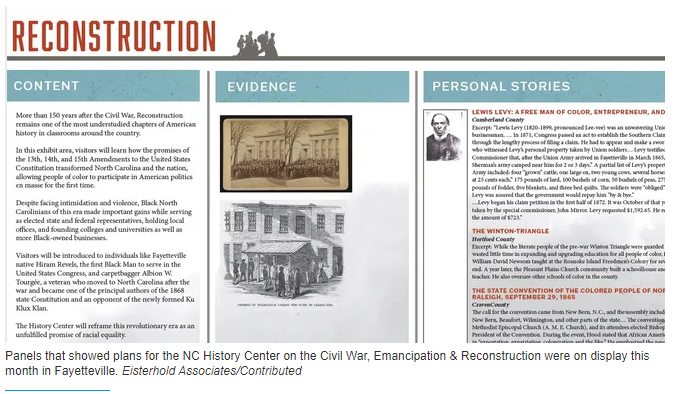 The Fayetteville City Council agreed Monday to pay $6.6 million toward the construction of a history center — a move the co-chair of the center’s board says practically guarantees that the facility will be built in the city.

“No doubt,” Mac Healy said Tuesday. “The Fayetteville community stepped up and said, ‘We want this here.’”

The nine members of the council unanimously approved funding for the NC History Center on the Civil War, Emancipation & Reconstruction. The money from the city will go with $59.6 million from the state, $7.5 million from Cumberland County and private funds for the facility, which will be operated by the state and take the place of the Museum of the Cape Fear on Arsenal Avenue near downtown.

No ‘Lost Cause’ narratives in center

Some residents have raised questions about how the center will tell the story of the Civil War. Some of those concerns were echoed by council members. The motion by Councilman Mario Benavente to approve the funding included a stipulation that the center would tell the “true story” of the war and its aftermath rather than the “myth of ‘Lost Cause’ narratives.”

Healy said the center’s board will easily agree to that.

“It was never our intention,” he said.

The city’s motion also says that the city will get a seat on the center’s board and that the fund will be used for “brick and mortar” construction.

Healy said the center board also will agree to those stipulations.

Importance of local support for the center

The council’s vote clears a major hurdle for the center because it signifies local support for the project, Healy said.

“It shows that we’re all in this together,” he said.

Healy said that the vote also was important because the county funding was contingent on support from the city.

Supporters of the center have raised about $14 million since the concept was first seriously discussed about eight years ago, Healy said. Some of that money, which includes $5 million in state funds, has been used for work that has already been done in the first two phases of the project, he said. Some funds also have to be set aside in an endowment fund, he said.

Healy said the money approved by the City Council on Monday will be used with the state and county funds to build the main building on the site. Construction of the building was originally estimated to cost about $65 million, but was recently projected to cost about $104 million, he said.

Center supporters asked an architect to revise the building concept so that it would cost about $80 million.

Healy said he thinks about $8 million will need to be raised from private donors to complete funding for the project. He said he expects that it will be easier to raise that money now that the city, county and state have agreed to fund the center.

“Everybody wants to be part of a success,” he said.

A guarantee amid skepticism

Councilman Derrick Thompson said during the council meeting that he has always supported the center.

Thompson asked Mary Lynn Bryan, also a co-chair of the center’s board, if the center would follow the stipulations in the motion.

“I can guarantee you that once it’s worked out, there’s no question we will do what we’re supposed to do,” she said.

Benavente said he understands the skepticism because he was taught about the “war of northern aggression” in school. He said he didn’t learn the true history of the Civil War until college.

The description of the war that Benavente mentioned is an example of the inaccurate portrayal of history seen in the South where the Confederacy is still idolized by some.

The center will bring “tens of millions” of dollars into the Fayetteville area, to educate students, Benavente said.

“We should look forward to all the benefits it’s going to bring to our young people as they learn the true history,” he said.