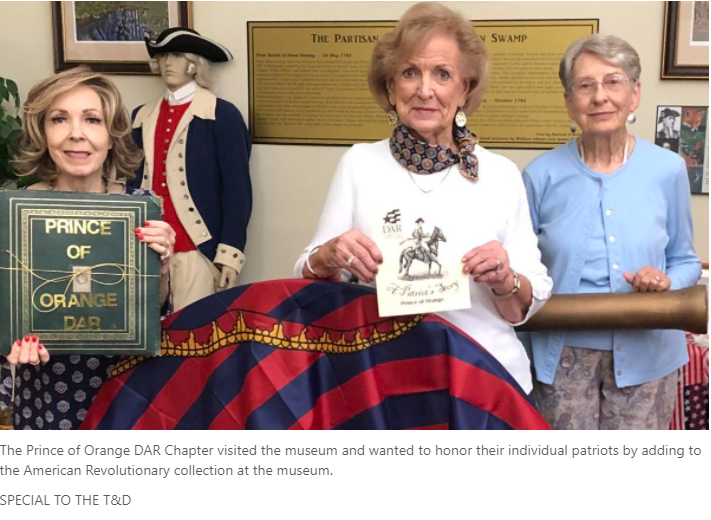 Springfield is home to an incredible treasure and variety of historical artifacts, photos and medals, all relating to battles fought from the American Revolutionary War to the war in Afghanistan.

The Orangeburg Military Museum, which is one of the state’s best stops for history, is a museum for learning and seeing the progression of history and the military wars that have affected the local area, state and nation. It is a premier museum for anyone who enjoys history from any era. Uniforms, communications, items used during each of the wars truly bring history to life.

The Prince of Orange DAR Chapter visited the museum and wanted to honor their individual patriots by adding to the American Revolutionary collection at the museum.

One of the keys to becoming a member of any DAR chapter is the ability to trace one’s genealogy to an ancestor who fought with or assisted the patriots in the American Revolutionary War. Ladies from the Prince of Orange chapter created and published a “patriot booklet” that contains information on their ancestors who participated in the Revolutionary War. To share and honor this history with the community, members presented their “Patriot Book” to the museum, along with a scrapbook and articles of the founding of their chapter. The Prince of Orange chapter was begun in 1962 by Mrs. D.J. Salley, who had a passion for community service. DAR chapters everywhere continue to promote history, support veterans, Gold Star families, work toward historic preservation and support literacy and youth through their service. If you are interested in becoming a part of a local chapter, contact Sheryl King at sheryldking1@gmail.com.