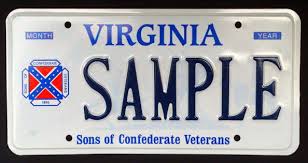 SUFFOLK, Va. – It is now illegal to drive with Virginia license plates featuring the Confederate flag, but some plan to defy the change in the Commonwealth.

Kevin Collier of Suffolk is a commander of the Stonewall Camp of the Sons of Confederate Veterans. He received a letter last month telling him he had until October 4 to swap out his Confederate flag license plate with a new one without the flag, provided by the Department of Motor Vehicles.

Governor Terry McAuliffe called for the change this summer after a man pictured posing with the flag was accused of killing 9 African-Americans in a South Carolina church. Collier has missed the deadline to change plates and said he doesn’t plan to.

The DMV said of 1,600 people in Collier’s situation, only 187 have returned the old plates. Some who didn’t want the new ones sent them back, writing “no thank you,” the department said.

Collier said his great-great-great grandfather fought with the Confederacy.

“I can’t fight on the battlefield like they did, but I can fight however I can in modern times and I’m not giving them plates up,” he said.

The DMV said it attempted to work with the Sons of Confederate Veterans on the design of the new plate, but the organization did not respond. It is considered a misdemeanor to drive with them.

Clarksville, Tenn. – For the last year of the 150th anniversary of the Civil War, the Tennessee Civil War National Heritage Area has expanded its traveling exhibition about emancipation and Reconstruction. “Free at Last!” tells the momentous story of the transition from slavery to freedom and the development of citizenship among formerly enslaved African Americans.

Doubled in size to eight banner stands, the exhibition now has panels focused on each of Tennessee’s three grand divisions. “Free at Last!” is available to museums and historic sites free of charge and is on view at the Fort Defiance Civil War Park and Interpretive Center in Clarksville from now to December 10th, 2015. 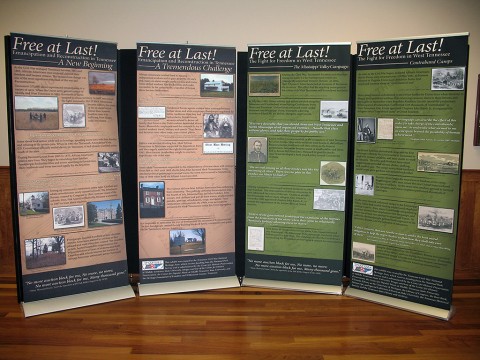 “Free at Last!” debuted in February 2007 with two banner stands providing an overview of emancipation and Reconstruction in Tennessee. “Our goal was to provide sites with a concise, well-illustrated introduction to the significance of emancipation and the agency of slaves in bringing about their freedom,” says Antoinette van Zelm, assistant director of the Center for Historic Preservation.

At the beginning of the Sesquicentennial in 2011, the Heritage Area added two panels on West Tennessee that emphasized the connection between the Union army’s advance along the Mississippi River, the escape of thousands of slaves to Union lines, and the systematic establishment of contraband camps under Union Gen. Ulysses S. Grant. The West Tennessee panels were based on the Master’s thesis research of Center for Historic Preservation graduate research assistant Cheri LaFlamme Szcodronski.

More than forty venues across Tennessee have hosted “Free at Last!” thus far. Sites will now have the opportunity to share even more of the story with visitors. New panels on East Tennessee look at that region’s legacy of emancipation before the Civil War and consider how emancipation has been remembered in the region since the war. The Middle Tennessee panels highlight the development of Unionism among enslaved Tennesseans and underscore the significance of education and citizenship during Reconstruction.

The Heritage Area has also published a driving tour of Reconstruction sites across the state. “The driving tour goes hand in hand with the expanded exhibition to provide Tennessee residents and visitors with in-depth knowledge about this significant and often misunderstood period in Tennessee’s history,” says Leigh Ann Gardner, interpretive specialist for the Heritage Area.

The Tennessee Civil War National Heritage Area receives funding from the National Park Service and is administered by the Center for Historic Preservation at Middle Tennessee State University.

Maryland may recall its license plates displaying the Confederate flag after a federal judge lifted an injunction that previously protected the specialty plates.

The injunction will effectively be lifted on Nov. 17, and Maryland Attorney General Brian Frosh said a recall could begin this fall.

“I look forward to the day when these plates are no longer on the road,” Frosh said in a statement. “This flag is a painful symbol that divides us, conjuring images of hate and subjugation. It has no place in any contemporary government use.”

In June, the U.S. Supreme Court ruled that specialty license plates do not fall under free speech rights. The court ruled that instead the plates were government speech, and Texas was allowed to reject a proposal to create a plate bearing the Confederate flag and honoring the Sons of Confederate Veterans.

The decision followed the fatal shooting of nine people inside a Charleston church. The alleged gunman, Dylann Roof, has been charged with hate crimes; he had placed a Confederate States of America plate on his car in addition to telling a friend he was motivated by racism.

In Maryland, local officials over the summer asked the attorney general to investigate whether the state could recall its Sons of Confederate Veterans license plates. Gov. Larry Hogan said in a statement he was against the use of the flag on Maryland plates.

The state had previously tried to get the Confederate flag off of license plates in the 1990s. At that time, a federal judge ruled they were protected by free speech, and the injunction went into effect. On Thursday, another federal judge agreed to lift that injunction in the wake of the Supreme Court’s decision.

In July, a judge ruled that Virginia could recall its license plates bearing the Confederate flag.

Duing the Civil War, Greene County, Tenn. was declared “enemy territory” by the Confederacy because of its pro-Union leanings, CNN reports.

“The area’s most celebrated native, Andrew Johnson, was the only Southern senator to remain loyal to the Union,” the report states.

Tonight, more than 150 years later, the county is expected to vote on a resolution to begin flying the Confederate flag alongside the American flag at its courthouse.

“Greene County Commission and the citizens they represent are proud to be Americans, but they are also proud to be Tennesseans and whereas, Greene County is conscious of its Heritage and loyalties; one that transcends the usual ties of national patriotism and state pride. Our citizens retain habits that are strong and memories that are long. Our region and its citizens have been powerfully shaped by its history and are determined to pass that history on to future generations…..and where as, the Confederate flag represents state rights, the south, it represents Dixie land, our culture, and our heritage and should be proudly displayed by our County.”

“The proposal was introduced by 67-year-old Commissioner James Randolph, who doesn’t expect the 21-member commission to pass the resolution but believes it’s important to put it to a vote. He says flying the flag would honor Confederate soldiers who died in the Civil War and that he doesn’t believe it’s a racist symbol.

“If you look at it and think it’s racist or anything like that, that’s your problem,” said Randolph. “There’s people who are offended about anything. It’s part of our history and I don’t think we should do away with it.”

Opponents have said they plan to stage a protest at the meeting.