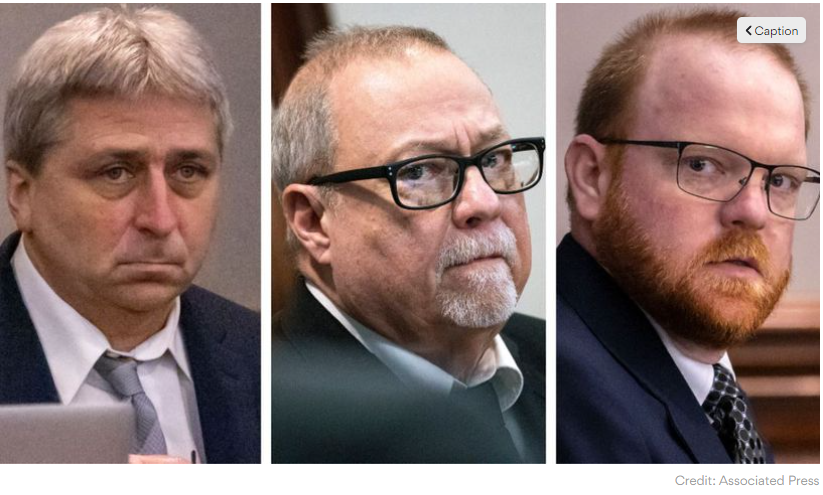 BRUNSWICK – After two weeks of testimony in the trial of three white men charged with murder in Ahmaud Arbery’s shooting, attorneys are expected to deliver their closing arguments today.

Race has permeated the public’s perception of the case from the beginning, but the issue has been notably absent from the evidence presented by prosecutors at trial.

Arbery, who was Black, was shot and killed Feb. 23, 2020, after being chased through the Satilla Shores neighborhood just outside Brunswick. Travis McMichael, who fired the fatal shotgun blasts; his father Greg McMichael, a former investigator for the local district attorney’s office; and their neighbor, William “Roddie” Bryan, were arrested more than two months later.

The killing galvanized this community of 85,000 and led to widespread demonstrations against systemic racism after Bryan’s cellphone video of the shooting became public. Arbery’s family has described the 25-year-old’s death as a “lynching” and all three defendants face federal hate crime charges.

A sea of Black clergy members descended on courthouse grounds Thursday after repeated efforts by Bryan’s attorney to have high-profile Black pastors and civil rights icons barred from the courtroom.

But the issue of race wasn’t brought up by prosecutors in front of the nearly all-white jury during the trial. It’s a decision that defense attorney Page Pate, who is closely following the case, called “a missed opportunity.”

“I think the calculation was they thought, especially with the makeup of this jury, that it would backfire if they tried to make it too much about race” said Pate, whose Brunswick office overlooks the courthouse. “I think they also just felt really confident about the video evidence and it being a clear case of murder, not self-defense.”

The defendants say they were trying to carry out a citizen’s arrest when they chased the fleeing Arbery, whom they suspected of a prior burglary. Travis McMichael took the stand last week, contending he fired in self-defense during a tussle over the 12-gauge shotgun in the road.

“But how you perceive that video is different depending on your background, and I think they miscalculated,” Pate said of the prosecution. He said the decision not to introduce race as a possible motive could end up swaying the case in favor of the defense.

Going into closing arguments, Pate thinks the jury could go either way.

Judge Timothy Walmsley ruled that photos of a Confederate flag license plate on Travis’ pickup truck could be shown at trial. It was included in photographs and police body camera recordings shown to jurors but the prosecution has made no mention of it, at least so far. Lead prosecutor Linda Dunikoski also never mentioned in front of the jury that Bryan told a GBI investigator he heard Travis McMichael utter a racial epithet as Arbery bled out on the asphalt.

That faced seemingly insurmountable procedural hurdles to get the statement into evidence. First of all, that statement is what Bryan told a GBI agent. And the GBI agent could not tell the jury what Bryan said to him because it is inadmissible hearsay. The only way it could have been brought up would have been to ask Bryan about it if took the witness stand, which he chose not to do.

Text messages, social media posts and other evidence that may have portrayed the 35-year-old McMichael as racist were also omitted from the state’s case.

“I think that would have been very persuasive,” said Pate, He called it a mistake by the prosecution not to try getting at least some of that in front of the panel deciding the case.

“There’s plenty of heat in this case, but she just left it all in the bag,” Pate said, referring to Dunikoski.

In her opening statement, Dunikoski said the chase and shooting were based on assumptions by the defendants and what she called “driveway decisions.”

“All three of these defendants did everything they did based on assumptions,” Dunikoski said. “Not on facts, not on evidence. On assumptions.”

Allegations of racist vigilantism were lodged last year after the cellphone footage became public. A Glynn County police officer testified that he watched the video at the scene from inside Bryan’s truck, but the agency never made any arrests. The GBI took over the case in May 2020, after the viral clip sparked national outrage and the McMichaels were arrested two days later.

The decision of the jury – comprised of 11 white people and one Black men—could hinge on whether they believe the McMichaels and Bryan were justified in their efforts to detain Arbery under Georgia’s old citizen’s arrest law.

The law, which was largely repealed this year in the wake of Arbery’s killing, gave private citizens the right to detain someone if they had “reasonable and probable grounds of suspicion” that person was escaping a felony.

Arbery visited a home under construction at least five times in the weeks and months leading up to his shooting. His visits were captured on surveillance footage, but prosecutors say there is no proof he ever stole anything.

Last week, several neighbors called by the defense testified their community was on edge following a string of entering auto crimes.

Both Greg and Travis McMichael had seen footage of Arbery inside the vacant home five houses down, and it was the elder McMichael who alerted his son and initiated the chase when Arbery ran by his house that afternoon. Travis McMichael testified that he hoped to detain the fleeing Arbery for police when he and his father, both armed, chased after him in a pickup truck.

Bryan joined in the chase in his own truck after seeing Arbery run past his house with the McMichaels close behind. Prosecutors contend the defendants hemmed Arbery in and kept him from escaping the neighborhood.

Travis McMichael testified that he made a “life or death decision” to shoot Arbery after he grabbed his gun and punched him.

“We were locked up,” he told attorney Jason Sheffield of his decision to fire. “He was on that shotgun. I knew that I was losing this. … I knew that he was overpowering me.”

Explore‘A life or death situation’: Travis McMichael testifies in his own defense

Dunikoski, in her cross-examination, got Travis McMichael to admit that Arbery never threatened him or said anything menacing.

“He never yelled at you guys, never threatened you at all, never brandished any weapons, didn’t pull out any guns … Never reached for anything, did he? He just ran?”