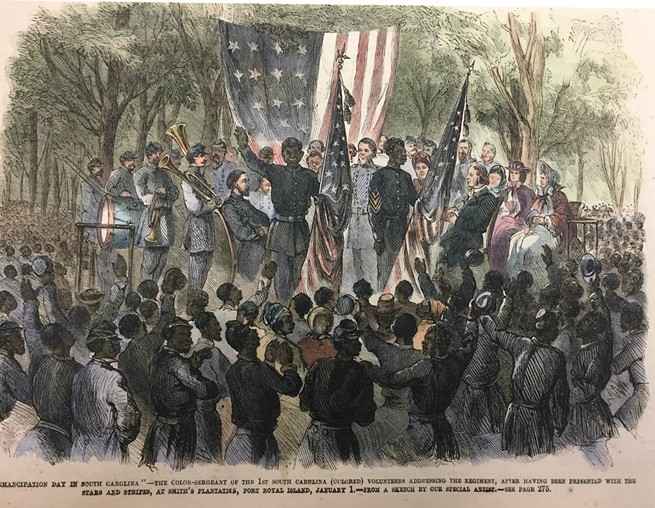 CHARLESTON, S.C. — Celebrants will gather on January 1 to ring in the new year, but in Charleston, residents will also continue what’s possibly the nation’s only continuous observance of Emancipation Day. Marking the signing of the Emancipation Proclamation by President Abraham Lincoln on Jan. 1 1863, this year’s events will be the 153rd annual gathering, a tradition that persisted through post-reconstruction and Jim Crow, into the modern era.

Library of Congress/Courtesy Bud Ferillo
An illustrated depiction of an Emancipation Day gathering in Beaufort, S.C.

The public is invited to participate from 12-2 p.m. with singing, African dance, poetry, and other sacred traditions carried on by Gullah Geechee communities around S.C. The Emancipation Day parade in downtown Charleston, another historic piece of the annual tradition, starts on Jan. 1 at 9:30 a.m. at Burke High School and continues on Sumter Street toward King and Calhoun streets toward Emanuel AME Church.

While the federal proclamation freed enslaved people in the Confederacy and other days are also designated to mark the end of slavery in April and June, Charleston’s annual Emancipation Day celebrations, which have been held each year since 1866, may well be the nation’s oldest, according to Charleston library historian Nic Butler.

Enslaved people in federally occupied areas near Beaufort were among the first to be officially freed, while others waited years as the Civil War continued.

The earliest organized Jan. 1 events in Charleston were held to mark the third anniversary of the proclamation’s signing and have included public celebrations ever since. Some private gatherings in church settings like the one at Morris Brown were initially the result of continued 20th century efforts to subjugate black residents, according to Butler.

The Emancipation Proclamation Association, which now organizes the parade, is a direct descendant of the post-Civil War group that first organized the events that have continued through the turbulent decades since Confederate states went to war to preserve the inhumane cornerstone of the the southern economy.