BURKE COUNTY, N.C. – The Sons of Confederate Veterans have placed a 20-by-30-foot Confederate flag along Interstate 40 in eastern Burke County.

The group is flying the flag because it believes UNC is trying to hide the toppled Confederate statue, Silent Sam, by placing it inside a building. 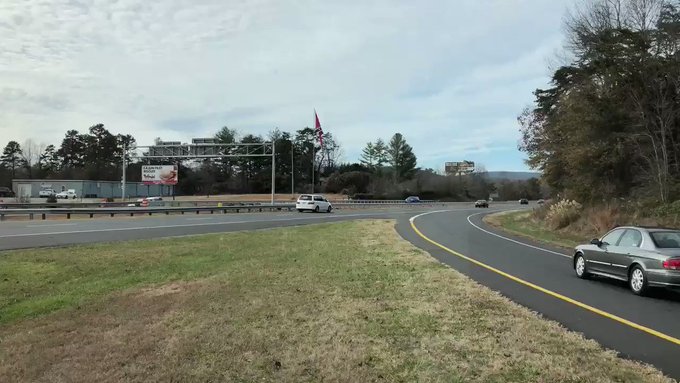 Burke County- Sons of Confederate Veterans have put up a 20 by 30 flag on Interstate 40 near Hildebran in protest of Silent Sam being taken down at UNC. The group spent 6000 dollars to raise the flag on a 75-foot pole. Their hope is to place one in every county in NC.
The Sons of Confederate Veterans erected the flag to honor those from Burke County who fought in the Civil War.

The organization said it will place huge flags along major highways in North Carolina for every Confederate memorial removed in the state.

“This is our repercussion for this,” Burke Tigers Sons of Confederate Commander Elgie McGallird said. “As long as they keep desecrating and taking our memorials down, we’re going to keep doing what we’re doing.”

“It’s for the heritage of the South,” flag supporter James Andrews said.

The mayor of Hildebran said he doesn’t want memorials torn down but placing the huge flag near the entrance to the town may hurt business.

“I think a better way was to take that money, all the money they have spent on those flags, and give it to veterans,” Mayor Wendell Hildebrand said.

The Sons of Confederate Veterans said some local businesses did support the flag raising.

“You know, there’s a lot of things that offend me also,” McGallird said. “The best thing to do is look the other way.”

The group said about 200 people came out this weekend for the dedication. It has plans to put flags in Statesville and near Asheville.