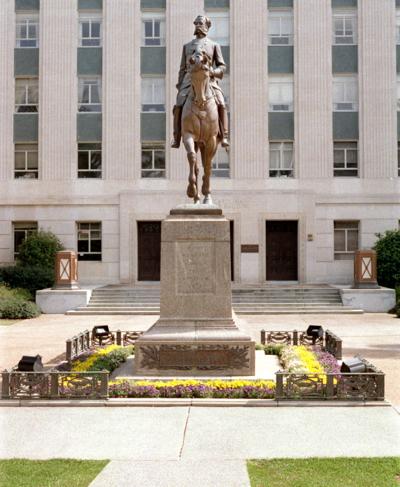 SOUTH CAROLINA: What Do We Do With Removed Confederate Monuments?

The John C. Calhoun monument in Marion Square was pulled down by city contractors in the early morning hours of June 23, whisked away to a secret location.

The decision to remove the monument was controversial, and part of a national reckoning about the history of racism in America. The statue was offered to the Charleston Museum, which politely refused to accommodate it, citing logistical and financial complications.

Many people have argued that Confederate and other controversial relics removed from the public square ought to be kept in museums, where the full history can be told with nuance and context. Calhoun, an accomplished politician from Abbeville who rose to become vice president of the United States, was a staunch defender of slavery.

The local museum is hardly the only institution to decline invitations to find room for a Confederate statue.

Robert Macdonald, a Mount Pleasant resident and director emeritus of the Museum of the City of New York, said museums can use history to tell contemporary stories. He would have liked to see the Calhoun monument positioned in the courtyard of the Charleston Museum, part of an exhibition that addressed issues such as nullification, slavery, white supremacy, the politics of the South and more.

The exhibition really could be about how Charleston has changed over the centuries, he said.

Other institutions are collecting materials related to the COVID-19 pandemic or the Black Lives Matter movement, intending to mount special exhibitions at some future date, Macdonald said. Charleston could mount a similar exhibit here about race in South Carolina.

“The Calhoun statue — when they put it up and took it down — tells so much about the city and how it has changed,” he said. “It would give people the opportunity to understand their community and how it got to be the way it is today.”

His museum has limited space, a specific mission and less financial flexibility since the COVID-19 pandemic set in, he said.

It didn’t make sense to put the statue in the lobby because of its imposing size; it would get in the way of special events hosted by the museum. The second floor is out of the question, Borick said. Getting Calhoun up there would require a crane and the removal of windows and more. Besides, the second floor is already full, and the galleries are not generally very large.

That leaves the outdoor space. But Borick questioned why it would make sense to move the statue from one outside space to another.

Contextualizing it requires a professional curator, he said. And expenditure. And research. And interpretation. And lots of panels to tell a story better conveyed in other ways.

“In the last two years, we’ve redone all of our rice culture, Revolutionary War, Antebellum and Civil War exhibits to tell a more inclusive story,” Borick said. And the board has approved a strategic plan that includes extending the museum’s historical interpretation from the Civil War through the 20th century, putting race relations front and center.

For the Charleston Museum, the Calhoun monument is not the best way to examine the history of race in the South, he said.

“That story is better told within the walls of our museum, and that’s what we intend to do,” he said.

‘What is the message?’

About 100 Confederate monuments and markers nationwide have been removed since the killing by police of George Floyd in Minneapolis on May 25. Additionally, buildings named for Confederate leaders, segregationists or other controversial figures are under scrutiny, including the Strom Thurmond Wellness and Fitness Center on the campus of the University of South Carolina.

The Citadel has been criticized for maintaining a Confederate flag inside its chapel. School officials, citing the state’s Heritage Act, have left it in place for now.

The Heritage Act forbids the removal of public memorials without approval from a supermajority of state legislators. A group of Republican lawmakers have introduced legislation that, if passed and signed by the governor, would punish cities and towns for removing such memorials.

The law would enable the state to withhold aid to any community that removes memorials and charge elected officials who vote to do so with misconduct in office. It would require all markers and plaques to be certified by the state Department of Archives and History to ensure they are “factually accurate and free of opinionated statements.”

City of Charleston officials have not given up on the idea of placing the Calhoun monument in a museum somewhere. Mayor John Tecklenburg has argued that proper contextualization using signage and other materials would help viewers better appreciate a more complete telling of history.

College of Charleston history professor Adam Domby isn’t so sure.

“They are ahistorical,” Domby said of Confederate monuments and memorials. “At one time I was willing to consider a compromise, (that) contextualization might have role. But as we have evolved, it’s become increasing untenable to maintain these monuments. … They propagate a memory of the past that is fundamentally false.”

Actually, worse than false, he said, citing a new book published by the University of South Carolina Press called “Monumental Harm.” In the book, author and law professor Roger C. Hartley refers to the harm principle, first articulated by the philosopher John Stewart Mill, which asserts that only behaviors that harm other people could be subject to bans.

Hartley extends this idea to Confederate monuments, arguing that since they inflict harm on African Americans by upholding the idea of white supremacy, removing them from public view is a reasonable thing to do, regardless of their presumed historical value.

“So it goes beyond ‘Can this work in a museum,’ to ‘What is the message?’” Domby said. Placing a large object such as the Calhoun statue in a museum still is granting it a place of honor, even with context added — context that not all visitors will take the time to scrutinize.

Museum placement is fraught with perils, he noted. If a monument is placed in the lobby or entryway, then the institution is sending the message that this monument is among the most important objects in its collection, Domby said.

“The history of monuments is interesting and relevant, but other stories are more important to tell, especially in museums,” he said.

Andrew Talkov is director of the Virginia Museum of History and Culture in Richmond, which is the beneficiary of the Robert E. Lee statue that once stood in the U.S. Capitol’s Statuary Hall.

In early 2020, the Virginia General Assembly formed a commission whose members voted unanimously to remove and replace the Lee statue. In August 2020, the commission voted to relocate the statue to Talkov’s museum, and the museum soon agreed to accept it.

He said it made sense for several reasons, logistical and programmatical. The statue is 6 feet, 8 inches tall, including the base, and weighs about 700 pounds, so it’s relatively easy to maneuver and doesn’t take up a lot of space.

“We could get it through the door,” he said. “We could display it, we could store it. It’s something of a scale that were able to take care of.”

It fits well with the museum’s mission to preserve and interpret Virginia history, and soon will be part of a planned exhibit to be part of the museum’s Confederate Memorial Institute. That space includes a series of painted murals that serve as an example of “Lost Cause” iconography, replete with proud soldiers, supportive civilians on the homefront, women who know their place, and loyal Black people, Talkov said.

At the center of this painted imagery is a statuesque Robert E. Lee, mounted on a white horse.

“This space has been preserved for over 100 years,” Talkov said. “And it’s our intention to use that space as an opportunity to talk about the Lost Cause, about Confederate memory, and to include this piece as the most recent example of how Confederate memory is being shaped and perceived in the 21st century. It fits very well into a space, and into a building, that was a product of efforts to remember the Confederacy.”

Considering the monument, and the figure it was meant to honor, in a contemporary context will present challenges and opportunities, he said.

Talkov hopes to spark community engagement and discussion, and to examine the changing attitudes toward Confederate iconography and the skewed version of history it was meant to convey.

“For all of those interpretive reasons, we were enthusiastic to have an object in our collection that was truly representative of this story and could be looked at from all these perspectives,” he said.

Other museums also have agreed to house Confederate monuments, including the Dolph Briscoe Center for American History at the University of Texas at Austin, which took in an 8½-foot-tall, 2,000-pound statue of former Confederate President Jefferson Davis removed from the campus grounds in 2015.

But many institutions are grappling with their historic failure to represent people of color adequately. Their narratives too often have omitted or belittled the contributions of Black people and other minorities. These museums, including the Gibbes Museum of Art, now are focused on broadening their presentations to be more inclusive.

As a result, some museum administrators question whether their institutions are appropriate places to consider the significance of Confederate statues. Most of the monuments were installed in the years following Reconstruction as part of a strategy to reassert white supremacy. More were erected in reaction to the civil rights movement of the 1950s and 1960s. For Black people, they are symbols of racial violence and oppression, no matter where they stand.

Domby pointed out that everything a museum chooses to do within its walls requires resources, human and financial.

“So it’s a value statement of where you should spend money,” he said. “Museums are not just about history. They are, in fact, judgments of society, a prioritization of social and historical events.”

And, in a way, that makes them political, he said.

For Robert Greene II, a history professor at Claflin University, who is Black, the whole debate about what to do with Confederate monuments seems a little superfluous.

“For African Americans, there is this idea: Just take them down,” he said.

Black people, who have opposed the monuments since the time they were first erected, generally are not interested in viewing these statues in a museum or anywhere else, Greene said.

“Throw them away if possible,” he said.