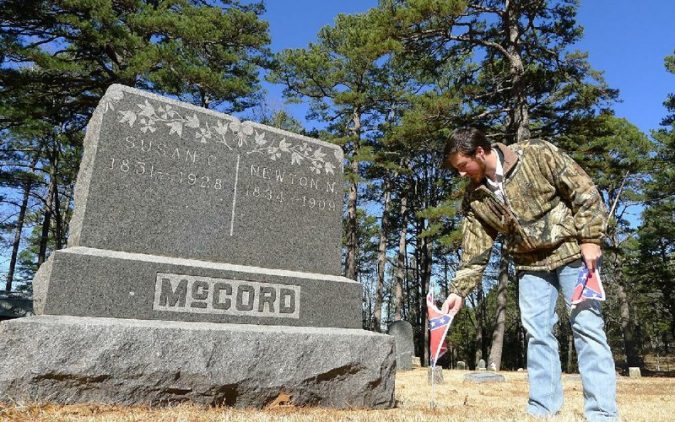 EUREKA SPRINGS — For years, small rebel flags have flown near the graves of Confederate veterans in Eureka Springs Cemetery.

But after a complaint that the Confederate flag “defines racial violence and hatred,” Eureka Springs’ cemetery commission started looking into the matter.

Members came up with a compromise.

The Sons of Confederate Veterans can continue to place the flags in Eureka Springs Cemetery unless a family member of the deceased objects.

Glenna Booth, a member of the commission, said the amendment was her idea.

“I just tried to come up with something that would be fair to everyone,” she said.

Booth said the amendment applies to more than just the graves of Confederate veterans.

According to the amendment, which was unanimously approved Feb. 12, individuals or groups wanting to place flags or plaques on grave markers must get the permission of the cemetery superintendent.

“If the plot owner or family does not want the placement of any flags or plaques, they should notify the cemetery superintendent so that can be discretely indicated on the plot,” according to the amendment.

Susan Tharp, chairman of the commission, said she hasn’t heard from anyone wanting no more flags on the graves of a family member. Tharp is the acting superintendent of Eureka Springs Cemetery.

Gloria Stevens, sexton at the cemetery, said there are about 47 Confederate veterans and 97 Union veterans among the 4,600 burials there. She said the cemetery was established in 1889, so none of those veterans died during the Civil War.

For the past five years, Koltin Massie, 20, of Busch in Carroll County has been putting rebel flags on the graves of Confederate veterans in the cemetery. He took over the flag duty after Gordon Hale of Berryville died in 2015. Massie said he has no idea how long the Sons of Confederate Veterans have been decorating graves in Eureka Springs Cemetery.

The flags measure 18-by-24 inches in size and are on wooden poles. Massie maintains the flags year round, at his own expense — $3 per flag. When a flag fades out in the sun, Massie replaces it.

“We can all compromise and be respectful of each other’s differences,” he said.

Massie is camp commander of the Sons of Confederate Veterans’ Seaborn Jones Cotten Camp 2303 in Eureka Springs. Cotten, who fought for the Confederacy, was Massie’s fourth great-grandfather. Cotten is buried in Louisiana.

Massie said most of the Confederate veterans buried in the Eureka Springs Cemetery were probably from somewhere else. Many probably moved to the town after the war to take advantage of the “healing waters,” he said.

“I know there’s a lot of people who don’t know where their ancestors are buried,” Massie said. “I want to respect them and carry on that legacy. I want to pay respect to their ancestors because I know just like mine I can’t always go to those places and see them.”

Massie said the flags are about history, not white supremacy.

“When we put the flags up, we’re doing it solely to honor the service of the veterans,” Massie said. “If they fought for the South, they get a Confederate flag because that’s who they fought for.”

But the rebel flags have rankled some people.

In October of 2018, the flags were disappearing almost as fast as Massie could put them in the cemetery.

Then, Massie confronted a 64-year-old Eureka Springs woman who he saw removing the flags and putting them in a trash can. Police were called to the cemetery. They “advised” Julie Ann Norrell not to take any more flags from plots other than her own.

Eureka Springs Police Chief Brian Young said at the time that officers weren’t in a position to make an arrest because they didn’t have a victim. He said Massie “donated” the flags by placing them on graves.

“It’s a gift,” Young said. “Once you give that away, the other person becomes the owner. … Really the victim is the family. The person who is in the grave can’t file the charges.”

Norrell told the Arkansas Democrat-Gazette that she has a plot in the cemetery.

“I find the presence of Confederate flags troubling,” she said.

All was quiet for a year or so. Then Kathy Attwood sent the commission a letter complaining about the Confederate flags.

Attwood also sent a letter to the weekly Eureka Springs Independent, which published it on Dec. 4.

“For over 20 years I have been walking through our cemetery to reflect upon the beauty and peacefulness that it provides, but with each walk, I have become aware of something troubling,” Attwood wrote to the Independent. “For anyone visiting our cemetery they will find a growing collection of Confederate flags scattered throughout and placed beside various tombstones.

“My question is why are they displayed all year long? If any cemetery allows these flags at all they are usually displayed on special occasions for only a few days and they must have permission from the family. Apparently, our cemetery does not require the family’s permission. This means that anyone who still clings to the past and holds the Confederate cause near and dear to their heart can come into our cemetery and place these flags at their pleasure.”

Attwood wrote that she had family members who fought for the Confederacy, “but I would never adorn their monuments with a flag that stood for slavery and white supremacy. It was a way of life that was wrong.

“The Confederate flag is not a statement of heritage and Southern pride,” she wrote. “Simply put, with its sordid history, the Confederate flag defines racial violence and hatred. It divides us. Is this how we want to be seen by visitors coming into our town? I hope not.”

“We should all be united under just one flag, the American flag,” Attwood wrote.

Booth said Attwood’s letter to the commission was the impetus for the new amendment.

Massie said he has placed U.S. flags on some of the Union veterans’ graves in the cemetery, but he no longer does that.

“We don’t want to steal the thunder away from the American Legion because we know they like to do that,” he said. But American Legion flags are usually only up for one day on holidays honoring veterans, he said.

Stevens said she likes to place a U.S. flag on a Union veteran’s grave near the places Massie has placed Confederate flags. She wants visitors to the cemetery to see that both sides are being honored. Stevens said her ancestors fought for the Union.

Tharp said she wants groups to appear before the five-member cemetery commission for approval to decorate graves. The random placement of items on graves can be problematic, she said.

“You kind of have to rely on people to have a little bit of respect,” she said. “A lot of people come out and they place trinkets and knickknacks and things on the graves. That’s great … but sometimes it’s a hassle for the groundskeeper because he’ll be weed-eating and hit a glass object and it’ll shatter and throw glass into his leg.”

Massie said he also decorates veterans’ graves at Walden Cemetery, Beaver Cemetery, Rockhouse Cemetery and a few cemeteries in the Berryville area. He decorates some Union veterans graves in those cemeteries with U.S. flags. So far, he is confining his flag-placing efforts to Carroll County.

Massie said he has more than 100 flags out at any one time at all those cemeteries.

“I will continue to honor those soldiers and others for as long as I’m living because they made the ultimate sacrifice that should not be forgotten,” Massie wrote on his Facebook page.

Massie said he’s currently a student at the University of Arkansas, Fayetteville studying agricultural leadership. He plans to be an auctioneer.