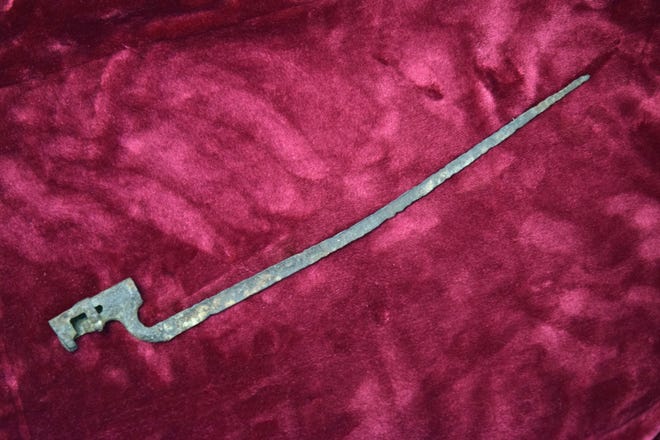 FLORIDA: Bayonet Discovered ByJacksonville Gardener May Be Connected To Grant’s March In 1861

A bayonet discovered by a Jacksonville man tilling his garden may have a connection to Grant’s March, the July 1861 journey that took then-Col. Ulysses S. Grant and 1,000 soldiers from Illinois to the battlefields of the Civil War.

Bob Anderson was working in his garden in the 1500 block of West Lafayette street when his tiller struck a metal object, said David Blanchette, board chairman of the Jacksonville Area Museum. Anderson retrieved the object and recognized it as a bayonet that may have been used in the Civil War. It was rusted and bent slightly by the tiller blade but intact.

“It isn’t hard to imagine a soldier who was being rushed off to war accidentally leaving it behind when the 21st Illinois left its overnight camp on the way to the Mississippi River,” Blanchette said.

The bayonet will go on display beginning Tuesday at Market House Antiques, 226 E. State St. in Jacksonville. The store is open from 10 a.m. to 5 p.m. Tuesdays through Sundays.

The bayonet will find a permanent home in the Jacksonville Area Museum, which is scheduled to open in late July in the old Post Office Building in the 300 block of East State Street, Blanchette said.

Although the museum can’t conclusively prove the bayonet came from a Grant’s March participant, it is the same type as those carried by Union soldiers, he said.

The bayonet was found “literally a stone’s throw away” from a marker commemorating the site of Grant’s July 5, 1861, encampment, Blanchette said.

Grant had been named colonel of the 21st Illinois Infantry, a Mattoon regiment whose members had refused to go into service under command of their previously elected colonel, according to SangamonLink, the online history of the Sangamon County Historical Society.

Grant joined the 21st at the old state fairgrounds, renamed Camp Yates, in what is now Springfield’s “Historic Westside.”

Grant found some soldiers in the 21st “could be led astray. … It was said that (the former colonel) even went so far at times as to take the guard from their posts and go to the village nearby and make a night of it. When there came a prospect of battle, the regiment wanted to have someone else to lead them.”

Grant led the 21st Regiment out of Camp Yates en route to Quincy, marching instead of taking the train. The regiment made its way to the Morgan County Fairgrounds in Jacksonville and rested on July 5.

The troops marched later that day to Allinson’s Grove, about seven miles southwest of Jacksonville where they spent the night.

A plaque on Old Jacksonville Road near Riddle Hill marks the early part of the regiment’s route.

From Quincy, the regiment eventually went to Missouri. There, the soldiers reinforced Union troops under attack from secessionist forces.

Grant left the 21st Regiment in August 1861, when he was promoted to brigadier general and eventually led all Union forces.

The members of the 21st, most of whom were from eastern Illinois, later participated in the battles of Murfreesboro, Tennessee, and Chickamauga, Georgia, where they suffered numerous casualties.

Anderson also found several badly-deteriorated and unfired lead musket balls in his yard. He recently decided to donate the bayonet to the museum to preserve and interpret it for posterity, Blanchette said.

Anderson’s residence is just a few yards away from the fairgrounds.

Blanchette said the only way to authenticate the bayonet’s connection to Grant’s party is to locate a diary of one of the soldiers. He added that the bayonet had no serial markings.

“It makes for a compelling story,” he said. “Especially where it was found (leads us to believe the connection).”

The museum, funded with donations and grants, will use original artifacts, storytelling exhibits and the building to portray the history of Jacksonville.

The museum will host the Smithsonian “Voices and Votes” traveling exhibit in late 2021, and is also the repository for the archival collection from MacMurray College, which closed in May 2020.

For more information, go to http://www.jacksonvilleareamuseum.org/.