CHARLESTON, S.C. — With its bright red-and-blue smoke stack shaped like a whale tail, the Carnival Sunshine was moored behind three car ships Friday afternoon in downtown Charleston — a vivid reminder to opponents who say cruise ships are chronic polluters and petri dishes for viruses.

The Sunshine has been at the State Ports Authority’s docks since March 16, when 2,441 passengers walked off the ship after a cruise from the Bahamas without being screened for signs of COVID-19, the new coronavirus.

This infuriated residents and some lawmakers, who noted that passengers were screened for fevers and other symptoms before embarking but not on their return to Charleston.

“No one can tell me how it makes sense to take their temperatures before going on the boat and then not checking after they’ve been hanging out in pools and hot tubs for several days,” said state Sen. Sandy Senn, a Republican from Charleston.

Because of the screening confusion, “there’s not a lot of goodwill out there” for the ship’s longer presence at the docks, she added.

“It’s also a lesson for the future. They’re saying the COVID virus will repeat itself in cycles later. What if we have cruise ships coming in and don’t yet have a vaccine? We need to establish some protocols for this now.”

For the time being, the Sunshine is tied up at the Columbus Street Terminal instead of its usual home at Union Pier.

With its waterslides and rows of windows, the ship contrasted with the more austere car ships, known in shipping circles as ROROs, short for roll-on, roll-off. Longshoremen could be seen driving wrapped vehicles onto the car ships while the Sunshine appeared empty.

It’s not. More than 1,100 crew members are on board with orders to stay on the ship for at least 14 days. But that period ends on Monday. A Carnival spokesman said there have been no medical or security issues during its stay since March 16.

Any crew member exhibiting symptoms of COVID-19 must be reported to the Coast Guard, according to a federal bulletin. 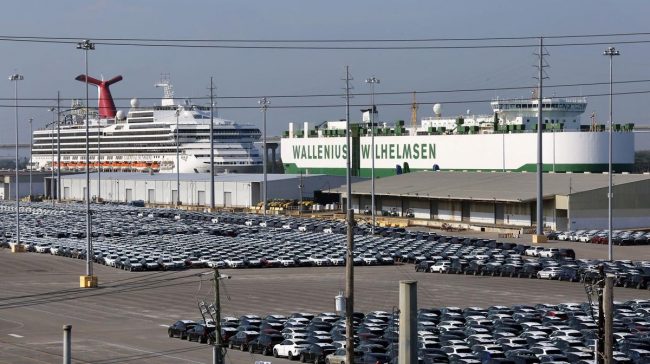 The Carnival Sunshine continues to dock at the state Ports Authority’s Columbus Street Terminal with roll-on, roll-off car ships on Friday, March 27, 2020, due to the novel coronavirus pandemic. Brad Nettles/Staff

Carrie Agnew, executive director of Charleston Communities for Cruise Control, said the ship’s presence is a “reminder that there absolutely have to be changes in how they check passengers getting on and off,” especially if cruise lines ramp up soon.

“This is a potentially very contagious situation threatening the Lowcountry.”

She wants the state to screen the crew when their 14-day quarantine is over.

“And they should make those tests public.”

It’s unclear whether that will happen. The state Department of Health and Environmental Control did not respond Friday to requests for information about their plans to monitor or screen the crew.

Conservationists said they were concerned about potential pollution from the Sunshine. They noted that Carnival’s ships have scrubbers that spray seawater mixtures on exhaust gas to remove sulfur. Once collected, that material is dumped into the ocean.

“That’s a water-quality disaster if discharged in the harbor, and frankly, I don’t like it being discharged offshore either,” said Andrew Wunderley, Charleston Waterkeeper.

He said the line’s discharge records should be made public, given its questionable environmental record. Carnival has been cited for violations ranging from dumping garbage in the ocean to burning heavy fuel in a protected area. In June, the company agreed to pay a $20 million fine over its pollution violations.

“Frankly I don’t think we should trust them any farther than they can throw their ships,” Wunderley said.

A Carnival spokesman told The Post and Courier that it’s operating the Sunshine with one engine on minimal power, and that it’s burning low-sulfur fuel. During its time in port, the ship won’t operate its scrubbers. Once a week, it will sail offshore to discharge its gray water — wastewater from laundry, showers and sinks. Trash and recyclable materials from the ship are being taken to shoreside facilities that meet state and federal regulations, the spokesman said.

Conservation groups and cruise opponents also said the ship’s extended stay in Charleston shows that the SPA should require cruise lines to plug into the electric grid instead of burning fuel next to neighborhoods.

“Shore power has to be in the mix,” said Blan Holman, an attorney for the Southern Environmental Law Center.

The Carnival Sunshine continues to dock at the state Ports Authority’s Columbus Street Terminal on Thursday, March 26, 2020, due to the novel coronavirus pandemic. Brad Nettles/Staff

The SPA said it doesn’t monitor emissions from individual ships but does test air quality at its terminals and posts that information on its website.

Agnew of Cruise Control said the screening fiasco on March 16 and the ship’s ongoing stay has galvanized opponents in a way that she hasn’t seen for years.

“I’ve had more emails and calls about this thing,” she said with a sigh. “We’re having a wake-up call.”