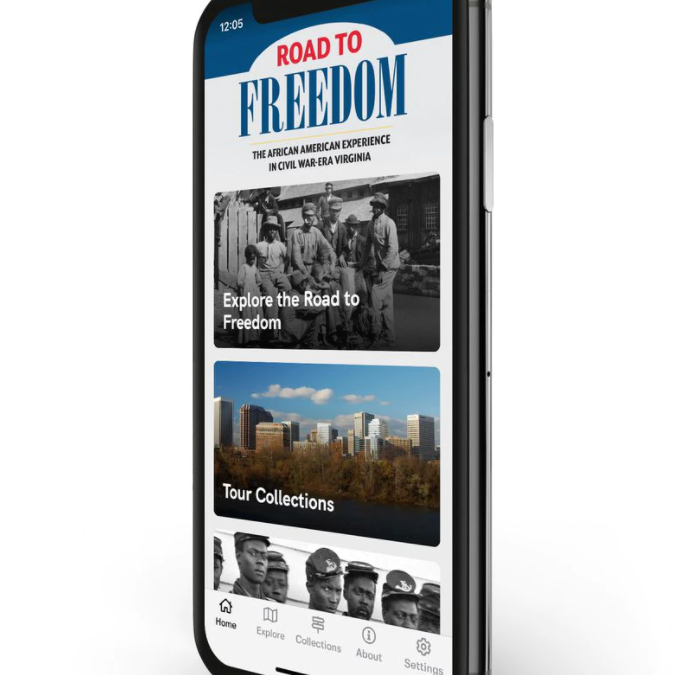 The American Battlefield Trust and Civil War Trails Inc. began their latest project more than a year ago having no idea how pertinent that work would become.

The recently released Road to Freedom tour guide is a phone app, online app and printed map that overlays Virginia’s Civil War sites with the African American history connected to those places.

The tour currently highlights 88 spots, including churches, houses and people tied to areas or named on roadside markers. The online and phone apps offer different ways to explore. Both have a searchable map. People can also swipe through historical photos and videos for information and directions. The apps have some destinations already grouped by geography and theme, such as sites in Alexandria and a collection of the state’s historic cemeteries.

The timing of the release wasn’t intentional but perfect nonetheless. The weather is warming and people, many of them newly vaccinated and weary of the pandemic, are looking to get out and explore. Many of the sites are outdoor destinations that inherently promote social distancing. The stories also provide the historical background for the racial and cultural discussions about slavery, discrimination and Civil War memory that have bubbled up nationally during the past year.

The apps will be constantly updated, said Mary Koik, director of communications for the American Battlefield Trust, in Washington, D.C. The group, a nonprofit, is the country’s largest battlefield preservation organization; it purchases Civil War and Revolutionary War sites and uses them to teach history.

“The purpose of the organization is to say that something important happened here,” Koik said. “But we are really interested in helping show that there can be layers of that importance. … A battle might have occurred somewhere on a specific day but that’s hardly the only important thing that might have happened here.”

The trust has worked with Civil War Trails for years. Civil War Trails, another nonprofit, is based in Williamsburg. Its popular network provides markers and detailed signs at more than 1,200 sites in Virginia, Maryland, West Virginia, North Carolina and Tennessee.

Koik said information on “Road to Freedom” isn’t new but a consolidation of what’s on any number of sites. Combining the stories produces a more accurate and complete history, she said.

“You can see that these stories don’t stand alone; they’re intertwined,” she said. “I think that piece helps people really see the power and depth of what’s there.”

The “Road to Freedom” maps are now available at visitor centers around the state, and the app can be viewed online and downloaded on Android and Apple devices.

Civil War Trails released a study last July that pulled stats from several tourism groups including the Virginia Tourism Corp., the Economic Development Partnership of North Carolina and the Maryland Office of Tourism Development. It showed that interest among overnight travelers in seeing historical sites was higher in the Virginia, North Carolina and Maryland region than the national average. History traveling was also skewing younger with the largest increase among those in the 25 to 34 range.

“When you stand in the footsteps of Mary Peake at the Emancipation Oak, that is an authentic experience. You can’t download that,” said Drew Gruber, executive director of Civil War Trails, referring to an African American woman who taught formerly enslaved people under a large tree during the Civil War. The tree is on the campus of Hampton University.

“You cannot feel that in any other way. You have to stand there and that’s personal; it’s evocative, it’s real, it’s human.”

Hampton Roads’ sites include Fort Monroe in Hampton, the Cuffeytown Thirteen in Chesapeake, which honors 13 African American Civil War veterans, and George Teamoh in Portsmouth. Teamoh was a formerly enslaved man who served in the Senate of Virginia from 1869 to 1871.

“People are interested in history in a way that is different than in previous moments, in generations,” Koik said. “These aren’t new places, necessarily. They’ve always been there. But we’re seeing them in a new light and that’s pretty wonderful.”