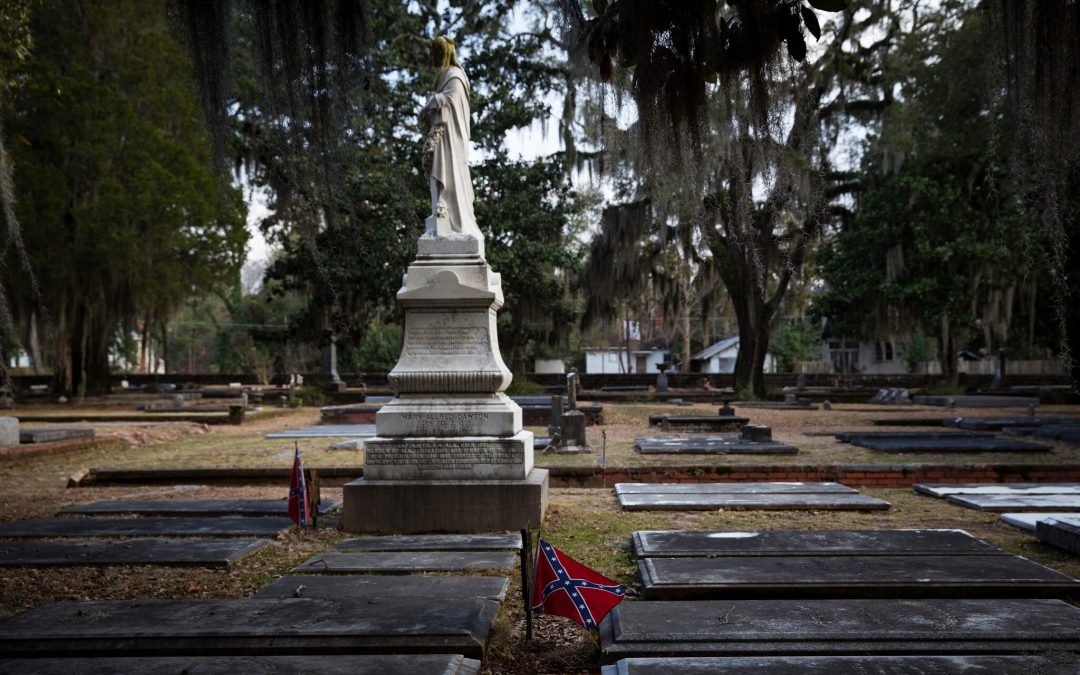 ALABAMA: After Threats To Turn It Into a Toilet, Confederate Monument Recovered

As ransom demands go, this one was a bit different.

After a heavy, ornately carved limestone chair dedicated to Jefferson Davis disappeared last month from a Confederate burial ground in Selma, Ala., where it had stood since 1893, a group calling itself White Lies Matter claimed last week to have the chair in its possession.

The group said it would return the chair to its owner, the United Daughters of the Confederacy, but only on one condition. White Lies Matter demanded that the United Daughters hang a banner on its headquarters in Richmond, Va., the former capital of the Confederacy, according to AL.com, which reported on the demand. It was to remain there from Friday — the anniversary of Robert E. Lee’s surrender at Appomattox — to Saturday.

The banner was to display a quote attributed to Assata Shakur, a Black Liberation Army activist wanted for escaping from prison while serving a life sentence for the murder of a New Jersey state trooper in 1973: “The rulers of this country have always considered their property more important than our lives.”

“Failure to do so will result in the monument, an ornate stone chair, immediately being turned into a toilet,” read an email that White Lies Matter sent to AL.com. “If they do display the banner, not only will we return the chair intact, but we will clean it to boot.”

The group didn’t have to. The New Orleans police said that a tip had led them to the “seemingly undamaged” chair near the intersection of Feliciana and North Galvez Streets on Thursday and that they had made plans to return the monument to its owner.

The police said they had also arrested two people, Stanley Warnick, 32, and Kathryn Diionno, 24, and were seeking a third person, Stanley Pate, 34, in connection with the theft. All three face charges in New Orleans of possession of stolen property, the police said, adding that the chair was worth $500,000.

Michael Jackson, the district attorney in Dallas County, Ala., said the three would also face charges in Selma of extortion and theft.

“This was stolen from a cemetery, and you don’t want to encourage young people to steal and that theft is OK, for whatever reason,” Mr. Jackson said. “I don’t know what their motive is, but this is the kind of situation that makes people angry, on all sides.”

The New Orleans police did not say if the theft was connected to White Lies Matter, and both Mr. Warnick and Ms. Diionno denied any involvement with the group, according to Michael Kennedy, a lawyer who represents Mr. Warnick and was authorized by Ms. Diionno’s lawyer to speak on her behalf as well.

“Our clients are not affiliated with White Lies Matter or any other political activism group,” Mr. Kennedy said, describing Mr. Warnick and Ms. Diionno as the owners of a tattoo shop who, like other small business owners, had been struggling during the coronavirus pandemic.

“Obviously they’re upset to have been arrested and to have their names associated with anything like this,” Mr. Kennedy said. “It comes down to just a mistake. Clearly, an unfortunate one, but a mistake.”

Ms. Godwin said her group was now deciding whether to return the chair to its longtime home in a section of Selma where Confederate soldiers are buried. She estimated it weighs about 500 pounds.

“From what I can gather, they’re going to do this again,” she said. “So we’re hoping they are prosecuted to the fullest extent of the law, and maybe it will derail their efforts to continue to do this.”

Ms. Godwin said she had been “absolutely devastated” when the chair vanished on March 19 and said the United Daughters of the Confederacy had offered a $5,000 reward for its return. She said the group planned to pay the reward to a tipster who she said had helped the police find the monument.

“It was the pressure from the New Orleans police that brought these people to light,” Ms. Godwin said. “It didn’t have anything to do with them recanting their intentions about turning the chair into a toilet.”

The chair was taken at a time when protesters across the country have toppled statues of Confederate leaders, targeting them as symbols of racism and white supremacy. Some cities have also removed, sold or sought to contextualize Confederate monuments with historical panels.

An unnamed spokesman for White Lies Matter, speaking in a Southern accent that he acknowledged was fake, told The Washington Post that the group had taken the chair “to create conversation” about the way some people value objects over human life.

“We took their toy, and we don’t feel guilty about it,” the group told nola.com. “They never play with it anyway.”