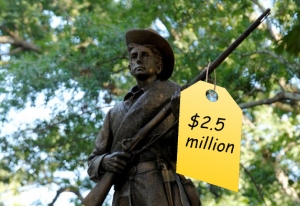 CHAPEL HILL, N.C. — The Lawyers’ Committee for Civil Rights Under Law declared victory in a Silent Sam case today after an Orange County Superior Court dismissed the controversial lawsuit between the group known as the Sons of Confederate Veterans and the University of North Carolina over the “Silent Sam” statue.

In a news release, the committee announced it has withdrawn its appeal of the court’s denial of a motion to intervene, filed on behalf of six students and a faculty member at the UNC-Chapel Hill.

The original lawsuit, filed the day before Thanksgiving in 2019 by the Sons of Confederate Veterans and immediately settled by lawyers representing the university, had resulted in the group receiving custody of the statue and a payment of $2.5 million from UNC.

This is from a news release explaining today’s action by the Lawyers’ Committee:

“The purpose of their intervention was to expose the fictitious and collusive nature of the lawsuit, get the court to dismiss it, and return the $2.5 million and the Confederate monument known as ‘Silent Sam’ to the University.

Although the court denied them their right to be parties in the case, the students and faculty member were allowed to participate as amici, or “friends of the court.”  The Lawyers’ Committee for Civil Rights Under Law represented them. Since the Sons of Confederate Veterans had no ownership interest in the monument and therefore no “standing” to sue the University, the Lawyers’ Committee argued, the case should be dismissed and the funds and monument returned. The court agreed.“

The release went on to include a statement from De’Ivyion Drew, a rising junior at UNC-Chapel Hill and one of the movant-intervenors, calling on the university to destroy the statue and invest the money returned from the Sons of Confederate Veterans, along with a matching amount (for a total of $5 million), “in funds to support diversity and racial inclusion on campus and in the broader community.”