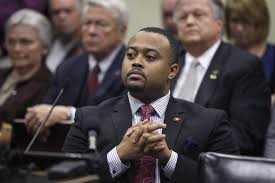 ARKANSAS: Lawmaker Who Pushed for Removal of Confederate Flag Resigns From Legislature

LITTLE ROCK, Ark — (AP) – The top Democrat in Arkansas’ House and the lawmaker who’s pushed for removing the Confederate designation from the state’s flag is stepping down from the Legislature.

Rep. Charles Blake said Thursday he’s resigning from his seat representing a Little Rock district. Blake, who is the House minority leader, said his resignation will be effective Friday.

Blake said he’s leaving for a new opportunity but declined to say what the new job will be. Blake has served in the House since January 2015.