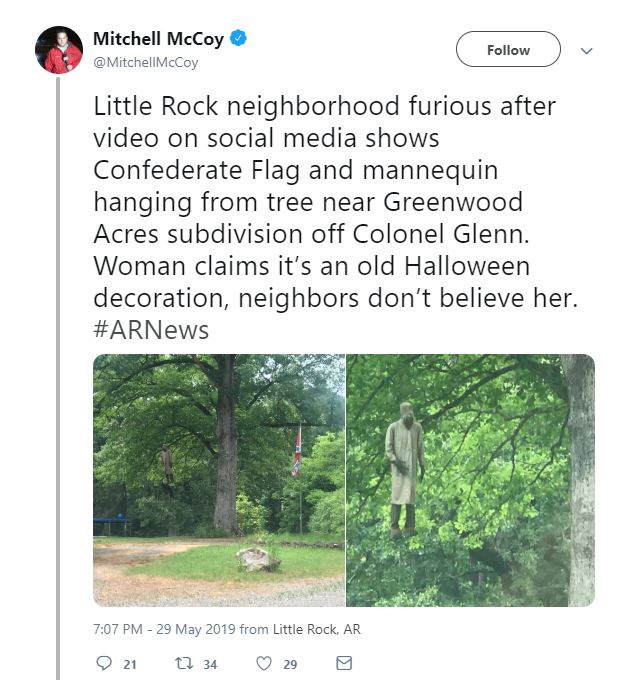 ARKANSAS: Woman Removes Lynching Mannequin and Confederate Flag After Backlash
LITTLE ROCK, Ark. — A resident in Little Rock, Ark., has removed a mannequin hanging from a tree in her front yard after the display in combination with a Confederate flag prompted outrage from her neighbors.

“Well, hell, I’ll take it down. This is a Halloween decoration — a Creeper. You know the movie Jeepers Creepers,” the woman told a local television reporter, referencing the horror franchise in which a demonic creature menaces college students.

The resident denied that the display had anything to do with race despite neighbors’ concerns the display resembled a lynched black man. The local outlets reported that a Facebook post of the neighbor’s home had sparked the backlash.

“This day of time, there’s no place for it,” Little Rock resident Ricky Allen told the local reporter. “I saw a video of a noose, of a person of color, hanging from it. It’s kind of disturbing. … It’s heartbreaking to know neighbors in the neighborhood like that.”

The woman said no one had directly talked to her about the display. When the news crew returned roughly 20 minutes later it had been removed, according to local reports.

“They could have knocked on the door and asked instead of calling the news out,” she told the outlet.

“Somebody called and told you all about it, I think that’s why they took it down,” Allen told reporters.