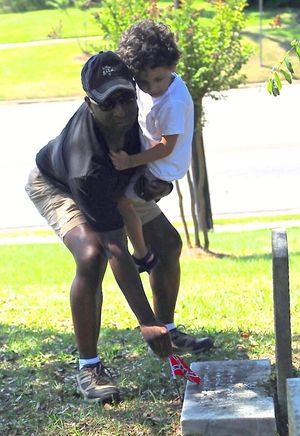 UNION SPRINGS, Ala. — A prominent attorney admits to taking flags from the graves of soldiers, a move that’s sparked both positive reaction and calls for him to be arrested and disbarred. He’s also received death threats and hate mail.

The lawyer says his actions are meant to promote unity.

A bag of small Confederate flags sits at Union Springs City Hall. They were removed from graves at an old Confederate cemetery downtown, behind the Red Door Theater, near the intersection of Highway 82 and North Prairie Street.

Myron Penn pulled up the flags with his family on Mother’s Day. Penn, a founding partner at Penn & Seaborn Attorneys at Law in Union Springs, who served as state senator for two terms and as chairman of the Bullock County Commission, says he did it for his 4-year-old son.

“The reason why we picked them up is because the image of the flags in our community, a lot of people feel that they’re a symbol of divisiveness and oppression of many people in our community,” Penn said. “Especially with the history that that flag and the connotation and negativism that it brings. I would think that no one in our community would have a problem with this or with my actions at all.”

While some support what Penn did, others are outraged. The story has spread on social media.

“I just thought it was great when he did that. He said that he came up there with his little boy and I thought it was absolutely great,” said Tchernavia Blackmon, a Union Springs resident. “He did the right thing. I wish I had been out there to help him pick up the flags. He did a great job.”

“It’s not about race or the flag or anything else. It’s about decency and respect for the dead. You don’t do stuff like that,” added Rebecca Atkins. “You got to give respect where it’s deserved and those soldiers gave their lives just like any other soldier gives their lives. It’s nothing racial and it’s not about discrimination. You look at the person who served for our country and that’s what matters.”

Others say it was criminal, citing Alabama Code 13A-7-23.1 which states that it’s against the law to “willfully and wrongfully or maliciously destroy, remove, cut, break, or injure any tree, shrub, plant, flower, decoration, or other real or personal property within any cemetery or graveyard.”

Penn responded to the backlash and says no laws were broken since he left the items at City Hall for anyone to claim and pick up. He says the city typically removes the flags after Confederate Memorial Day anyway.

“I invite anyone to say how I’ve broken the law by removing the flags,” Penn said. “They’re making my point with the ugly comments and the meanness. It’s exactly why those flags shouldn’t be there in our community because that’s not what our community stands for. We want our community to grow. We want all of our people, especially our children to feel as though they’re growing up in a community that is not divided. I would think that everyone here in Bullock County feels the same way.”

While the cemetery is inactive, it is city-owned and maintained so we turned to Union Springs officials for comment. Calls to the city attorney were not returned Friday and she was not in her office early in the afternoon.

The mayor, Saint T. Thomas Jr., was not in the office Friday, but over the phone, he briefly discussed the matter. He says an outside group came into Union Springs to set the flags out at the cemetery and that they were in the wrong, not Penn.

“Something happened that should not have happened. The group who put them down should have asked for permission from the city council. They had no business putting them out in the first place,” Thomas said, calling it “illegal activity.”

He referred all other questions to the city attorney. The Attorney General’s Office said they could not speculate on whether a particular circumstance is a violation or not.

Meanwhile, Penn has no regrets. He hopes his actions and the dialogue they started help move Bullock County forward.

“The action that I’ve taken to get the flags up would not be one that divides people. In fact, it’s the opposite. It’s one that would bring our community together to say this is our community, this is our town, this is Bullock County. We’re one of inclusion. We don’t want to hurt anybody. We don’t want to remind anyone of an oppressive past. We want to move our community forward economically and socially,” Penn added. “I did this not just for my child, but for all the children and all the parents who would want to do the same kind of thing to make sure that they do not grow up in a community that does not appear to be divided.”

A representative of a local chapter of the Sons of Confederate Veterans says he’s considering legal action.

A group called the Defenders of the Confederate Cross is planning a protest in Union Springs next month. It is scheduled to take place June 19-20.

The Defenders of the Confederate Cross released this statement:

“While we DO NOT CONDONE acts of violence against any one, this has nothing to do with race, slavery, or oppression. This has alot to do with people walking on and disregarding Confederate heritage. In 1958 congress ruled confederate veterans are AMERICAN veterans and D.C.C. will see that they are treated as such. We will replace the flags that were illegally removed and keep a ever present eye on all Confederate Veterans graves!”

Vicksburg National Military Park will observe the conclusion of its Civil War Sesquicentennial on Monday, May 25, 2015, with two memorial services and a concert.

At 9 a.m., a wreath laying, rifle salute and playing of “Echo Taps” will be held to honor the over 17,000 Union dead buried in Vicksburg National Cemetery. At 11 a.m. the same ceremony will be repeated at Soldiers’ Rest, in the Cedar Hill city cemetery, to honor the over 5,000 Confederate dead interred there. The public is cordially invited to both, and encouraged to bring a spray of flowers to place with the wreaths, if they so desire.

Admission is free for all events; please use the Fort Hill Gate to access Vicksburg National Cemetery. Call (601) 636-0583 with any questions.

At 1 p.m., the Olde Towne Brass will give a concert of Civil War band music, played with period arrangements, and on actual period instruments on the lawn of the Old Court House. The concert should last approximately one and a half hours, and will take place in the upstairs courtroom in the event of rain.

The American Civil War cost over 800,000 lives, and changed the very foundation of our country and government. As we hold this final Sesquicentennial observance and memorial, let us pause and give thought about what and for whom these brave soldiers and sailors fought.

That’s why Sweeper portrays Smalls in public performances. On May 14, Sweeper made an appearance at the Aiken County Public Library on Chesterfield Street.

“I hope my audience gets an appreciation for the struggles and the courageousness of people like Robert Smalls,” Sweeper said. “There was absolutely nothing mentioned in the history books in South Carolina about Robert Smalls when I was growing up.” 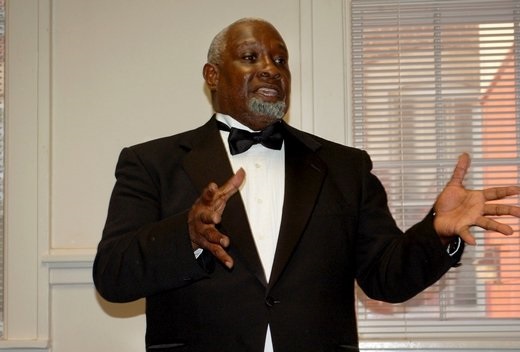 Born in Beaufort, Smalls was a slave. On May 13, 1862, he commandeered a Confederate transport ship named the USS Planter while it was at a Charleston wharf, maneuvered it past Fort Sumter and surrendered it to the Union Navy, which was blockading the city’s harbor.

“It was foggy, very foggy; you couldn’t see 10 feet in front of your face,” said Sweeper in his role as Smalls.

Replacing the USS Planter’s Confederate flag with a white bed sheet and Smalls’ knowledge of the correct way to sound a whistle to get past Fort Sumter also helped him pull off the daring escape.

Smalls won freedom for his family and his crew, and his bravery became a major argument for allowing blacks to serve in the Union Army. He later became a United States congressman.

Sweeper, who lives in Columbia but was born in Beaufort, has taught at the elementary and middle school levels. He wore a black suit, a white shirt and a black bow tie during his performance as Smalls. His props included hats and a whistle.

After he finished, Sweeper answered questions as Smalls and then as himself.

“I thought it was wonderful,” said Richard Parks after watching Sweeper’s presentation. “You learned about how people were so determined for freedom that they did whatever they had to do to obtain it for themselves and their families.”

“I thought it was very interesting and very educational, and I enjoyed it,” she said. “I didn’t know that much about Robert Smalls, and I found out a lot about him. I have family and friends in the Low country.

There was no charge for Sweeper’s performance, which was titled “Robert Smalls, From Slavery to Congress.” The Friends of the Aiken County Public Library funded the presentation.

Dede Biles is a general assignment reporter for the Aiken Standard and has been with the newspaper since January 2013. A native of Concord, N.C., she graduated from the University of North Carolina at Chapel Hill.

An Arkansas Civil War Sesquicentennial Historical Marker will be erected in Lafayette County, a state commission overseeing the program announced.

The Arkansas Civil War Sesquicentennial Commission works with local partners to tell stories of how the Civil War affected communities in Arkansas. The sesquicentennial period ends this year.

The Lafayette County marker, sponsored by the Lewisville Lions Club, is to be placed at a roadside picnic area on Arkansas 29 north of Lewisville. The marker will commemorate Civil War activities in Lafayette County and the black legislators who represented the county during Reconstruction.