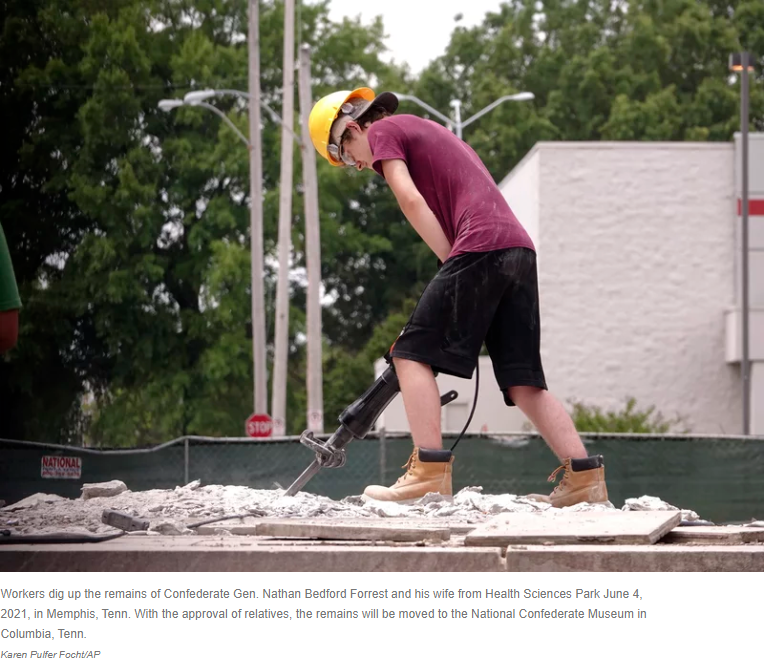 MEMPHIS, Tenn. (AP) — Confederate Gen. Nathan Bedford Forrest’s polarizing presence has hung over Memphis since he moved here in 1852 — his legacy cemented by a giant statue that loomed over all who passed his gravesite in a popular park.

Defenders considered him a hero for his Civil War exploits. Detractors called him a violent racist and noted his early leadership role in the Ku Klux Klan.

Now the former slave trader’s remains are set to be moved to a new Confederate museum in Columbia, Tennessee — another milestone in the effort to remove statues, monuments, and now the remains, of Confederate leaders from public spaces.

As workers prepared to dig up his grave earlier this month, a white man waved a rebel flag, sang “Dixie” and launched an expletive-laced tirade at Shelby County Commissioner Tami Sawyer. Sawyer, who is Black, plucked Confederate flags off a chain-link fence surrounding the site as George Johnson paced behind her on a concrete platform.

When he cursed at her again, Sawyer replied: “It’s not your property,” and turned toward reporters gathered for the June 1 news conference.

Health Sciences Park, where Forrest and his wife had been buried for more than a century, was called Forrest Park until 2013, when the name was changed. The statue of the general on horseback was removed in 2017, after a campaign Sawyer helped lead.

Now, the Sons of Confederate Veterans have agreed to transport his remains to their National Confederate Museum at the historic Elm Springs estate in Columbia, 200 miles away.

The group’s spokesman, Lee Millar, a distant cousin of Forrest, said the bodies of Forrest and his wife were in an undisclosed location until they can be moved to the museum.

“Memphis is not the town that Forrest grew up in,” he said. “It’s just deleting his history and forgetting about the past.”

Gradually, Forrest’s legacy has been dismantled in Memphis. Forrest traded slaves near the area where people of many races now come to eat, drink and watch ball games downtown. A short drive away is the old Lorraine Motel, where civil rights leader Martin Luther King. Jr. was assassinated on April 4, 1968.

Visitors view exhibits at the National Confederate Museum on June 6, 2021, in Columbia, Tenn.

Many in majority-Black Memphis are eager to see Forrest gone. The park where his grave was located has been the site of protests related to the Black Lives Matter movement. A music festival for Juneteenth, which marks the end of American slavery, is scheduled there this weekend.

“It’s like a burden has been lifted,” said Van D. Turner, a Black county commissioner who pushed for the Forrest statue removal. “It just gives us breath.”

Elsewhere in Tennessee, activists and Democratic lawmakers have called for the removal of a bust of Forrest from the state Capitol in Nashville. At Republican Gov. Bill Lee’s recommendation, the Tennessee Historical Commission voted to take down the bust, but GOP legislators argued another commission’s vote is needed. No removal plans have been announced.

After amassing wealth in Memphis, Forrest joined the rebel cause. Wounded four times, he led lightning raids on supply lines and commanded troops at Shiloh, Chickamauga and other Civil War battles.

Jack Hurst, author of “Nathan Bedford Forrest: A Biography,” says Forrest was the only soldier on either side to rise from private to lieutenant general.

In April 1864, Forrest’s troops attacked Fort Pillow in northwest Tennessee and killed an estimated 200 to 300 Union soldiers, most of them Black. Forrest was later accused of massacring them as they tried to surrender.

Historians say he was an early Klan leader, though some Forrest supporters dispute that, saying he was offended by its growing penchant for violence.

The remains of Forrest and his wife were moved to the Health Sciences Park site in 1904, where his statue towered above passers-by walking to work or to the nearby University of Tennessee medical school until its 2017 removal.

“The statue was reprehensible and was offensive,” said Sawyer, who says she received threats for her activism in getting it taken down. “It wasn’t something I believed belonged in our city.”

In December 2017, Memphis sold Forrest Park to a newly created non-profit, Memphis Greenspace, led by Commissioner Turner. The sale to a private entity circumvented a state law prohibiting the removal of historical monuments from public areas.

On the night of Dec. 20, 2017, a crane removed the statue from its pedestal. The Sons of Confederate Veterans sued, citing the state law, but a Nashville judge ruled against them.

Greenspace eventually gave the statue to the Sons of Confederate Veterans, and a judge signed an agreement approved by Forrest’s relatives to send the couple’s remains to the group’s privately funded museum, where Civil War artifacts are displayed.

The Sons of Confederate Veterans paid for the disinterment, using contractors and volunteers, including Johnson, the man who confronted Sawyer.

A monument to Forrest at the museum likely will be installed outdoors, in a park setting, where Millar said the former Confederate general can rest in peace.

“There has been some vandalism, some spray paint, protests,” Millar said of the park in Memphis. “The general wouldn’t be happy the way things are here.”

For Turner, the ouster of the Confederate monuments and Forrest’s remains is “undoing an injustice” in a city still dealing with King’s assassination.

“I hope that it gives life to the city,” Turner said, “and it lets the city know that we don’t have to allow our past to drag us down.”