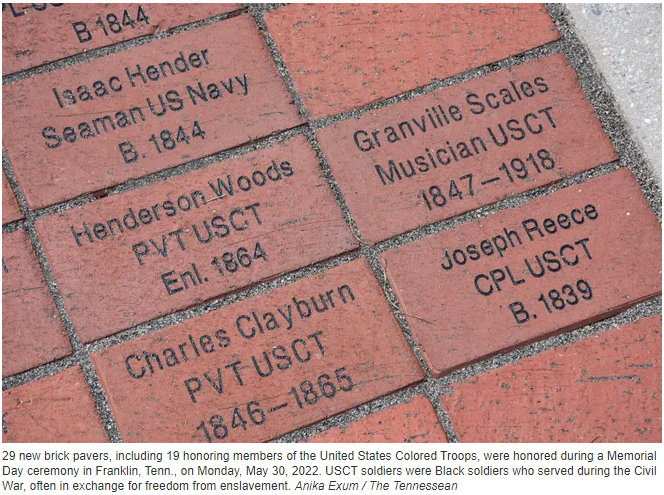 Veteran’s Park in downtown Franklin has immortalized the sacrifices of 29 veterans, including 19 Black soldiers who fought in the United States Colored Troops and the United States Navy during the Civil War — often in exchange for freedom.

The brick pavers were dedicated on Memorial Day.

“From the American Revolution to the current time, over 1,000,000 American men and women have made the supreme sacrifice,” Williamson County mayor Rogers Anderson said Monday in his address before joining Franklin Mayor Ken Moore to read off the engraved names of both Black and white soldiers.

“They died so that we could continue to cherish the things that we love.”

This year, crowds gathered at the park at Five Points as various flags flew at half-staff in honor of the holiday.

Since 2018, the Slaves to Soldiers project has raised funds to honor these soldiers, as extensive research reveals names and original stories. Franklin resident Tina Jones began the project in 2017.

To date, Jones and several contributors, including historians Thelma Battle and Rick Warwick, as well as the African American Heritage Society of Williamson County, have discovered more than 300 Black men from Williamson County who fought as a part of federal forces.

“I think that people had always assumed this was such a heavily Confederate area, that there weren’t African American soldiers,” Jones said to The Tennessean in 2018. “Now, we know they came from here in Williamson County, too.”

Jones said this year’s pavers were made possible by individual sponsorships, including Franklin mayor Ken Moore. She shared a thread on Twitter ahead of Memorial Day, sharing details regarding the human behind each brick’s namesake.

“CPL. John Pider (1843-1865) was (born) in Williamson County & served in the 13th US Colored Infantry,” she wrote in one post. “He fought at the Battle of Nashville and was later shot & killed by a guerilla at Waverly, Tenn. His paver was sponsored by the late @BousquetBrant.”

Sponsorships for pavers at next year’s dedication ceremony can be purchased with a donation of $65 at https://www.slavestosoldiers.org/home/how-to-donate.

Anika Exum is a reporter covering Williamson County at The Tennessean, part of the USA TODAY Network — Tennessee. Reach her at aexum@tennessean.com, 615-347-7313 or on Twitter @aniexum.