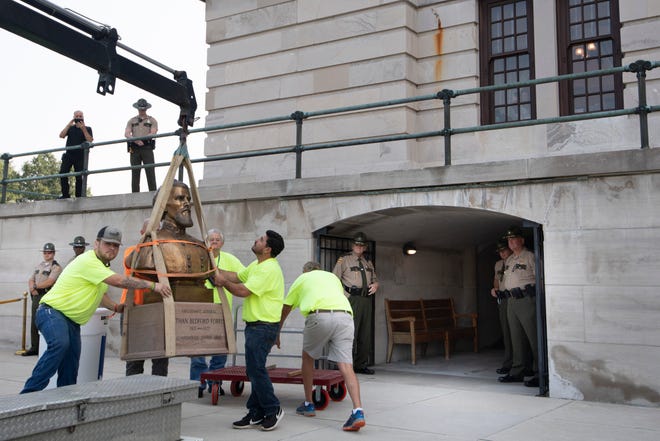 NASHVILLE, Tenn.: The bust of Confederate General Nathan Bedford Forrest, a controversial fixture in the Tennessee state Capitol since the late 1970s, is coming down.

The State Building Commission on Thursday gave approval for the relocation of the Forrest bust to the Tennessee State Museum, a final step in a process that has taken more than a year since Gov. Bill Lee first said it was time for the statue to be moved.

“It’s been a year long journey, and this is an appropriate step in that process,” Lee said prior to the Building Commission meeting Thursday morning. “It’s most important to me that we followed the process. We talked about that from the very beginning.”

Members of the legislative Black Caucus gathered outside the hearing room, and then by the bust, after the vote to celebrate.

Following a gradual shift in position on the issue since he ran for governor in 2018, Lee called for the relocation of the bust from the Capitol last July, saying he understood that Forrest’s legacy represents pain for African Americans.

Prior to serving as a Confederate general, Forrest was a slave trader and went on to become an early leader of the Ku Klux Klan.

The statue was not an early furnishing in the Tennessee Capitol, which was constructed just prior to the Civil War, but rather was installed in 1978.

In addition to Forrest, the state will also relocate the busts of U.S. Admirals David Farragut and Albert Gleaves to form a military exhibit at the state museum. The measure was approved last summer by the State Capitol Commission, and then overwhelmingly in March by the Tennessee Historical Commission.

The governor made a rare appearance at a Thursday morning meeting of the Building Commission, of which he officially serves as chairman but does not usually attend. The commission makes decisions about property owned by the state.

The House and Senate speakers were the only ones to oppose removal in the 5-2 vote.

“This is not the end. It is the beginning,” Lt. Gov. Randy McNally, the Senate speaker, said in a statement released immediately following the vote. “The left will move on to the next figure or monument and demand that we again kneel at the altar of political correctness.”

RELATED:Bust of Confederate Gen. Nathan Bedford Forrest in Tennessee’s Capitol officially can come down, governor says. So will it?

McNally, R-Oak Ridge, continued that “no one is arguing that Forrest is not a problematic figure.”

“He is,” McNally said. “But there is more to his story. His life eventually followed a redemptive arc which I hope is outlined in great detail in our state museum.”

Forrest toward the end of his life reportedly sought to change his ways.

Sen. Brenda Gilmore, D-Nashville, said McNally on Tuesday met with Black members of the Senate ahead of the meeting, a discussion she called “positive” but noted her disappointment with McNally and House Speaker Cameron Sexton voting against the measure.

“Certainly Nathan Bedford Forrest does not represent the values of Tennessee,” Gilmore said. “I’m pleased that those people on the commission had enough courage to respect the voice of the Tennesseans.”

Justin Jones, an activist in Nashville who has led protests against the bust since 2015, also attended the meeting.

”The key word that keeps coming up into mind is the word finally,” Jones said after the vote.

“Finally the commission has taken a step forward, finally they have acknowledged that this statue is wrong, and what it represents does not represent the state of Tennessee.”

Sexton after the meeting released a statement explaining that only “one perfect person” has walked the Earth, and Forrest should not be judged based on how society has evolved since.

“Any attempt to erase the past only aligns society with the teaching of communism, which believes the present dominates the past,” said Sexton, R-Crossville.

He said the legislature “will be working on revising current law to include a more significant voice of those elected,” presumably meaning the General Assembly will seek to take away the governor’s authority to influence similar decisions on statue removal.

While Republican members of the legislature have raised issues with some other facets of Lee’s agenda over the last two and a half years, the vast majority remained quiet on the issue after the governor last summer called for the bust’s removal.

Former Gov. Bill Haslam unsuccessfully sought to have the bust removed, and the Capitol Commission in 2017 rejected the proposal. Multiple members of the commission who voted against removal that year, including Secretary of State Tre Hargett and Treasurer David Lillard, changed their position when Lee brought the issue back for a vote in summer 2020.

Process of bringing Forrestbust began in 1973

Efforts to bring a bust of Forrest to the state Capitol began several years before it was installed, starting in 1973 when the late Sen. Douglas Henry, D-Nashville, filed a resolution instructing the Tennessee Arts Commission to work with the Sons of Confederate Veterans to procure a bust of Forrest for the Capitol.

The resolution passed both chambers, making it out of the House before the final day of session that year.

Every member of the legislature — including those in the Black Caucus — voted for the resolution.

Rep. Harold Love Jr., D-Nashville, whose father Harold Love Sr. was a member of the House at the time, told The Tennessean last year he wonders what kind of pressure Black lawmakers felt — both in the flurry of the final day of session and to ensure funding for their districts — to approve the measure.

At that point, Black lawmakers had been back in the legislature less than 10 years after nearly 80 years of the Tennessee General Assembly being all-white.

The bust was unveiled during a ceremony at the Capitol on Nov. 5, 1978, two days before McNally was first elected to the state House. McNally was sworn in for his first term that January, and over the years became close friends with Henry.

The lieutenant governor has opposed efforts to remove the bust, a fixture that was spearheaded by his late friend and legislative colleague.

The bust drew protests from African Americans as it was unveiled, opposition that continued for several years following the statue’s installation. Regular protests resumed in 2015 after the murder of nine Black parishioners at a church in Charleston, South Carolina. The shooter had written a white supremacist manifesto and shared photos of himself posing with a Confederate battle flag.

In 2010, the Forrest bust was moved from outside the doors of the House chamber to its most recent location in the main corridor between the House and Senate chambers. The move took place to accommodate a bust of Sampson W. Keeble, the state’s first Black legislator.

Lee as a candidate and shortly after his election in 2018 said he was opposed to taking down Confederate statues, telling The Tennessean at the time “removal of monuments is not the best approach.”

By February 2019, Lee announced he was open to the idea of adding historical context next to the bust in the Capitol.

In 2020, the governor said he was discussing with stakeholders on both sides the potential removal of the bust before announcing that summer he had decided the Forrest bust should be relocated.

The Forrest bust “represents pain and suffering and brutal crimes committed against African Americans,” Lee said last summer, launching a year-long process of removal that began with Lee calling a meeting of the Capitol Commission in July 2020.

A positive vote at that meeting marked a significant step forward in the removal effort, which had previously been unsuccessful.