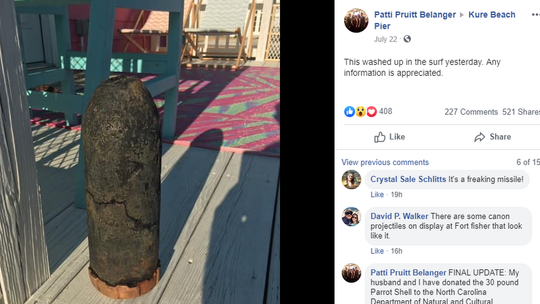 KURE BEACH, N.C. — A seashell hunt at Kure Beach turned dangerous when a North Carolina couple found a “big bullet” in the sand — and hauled it home as a keepsake.

Turns out the 12-inch-tall shell Patti and Kerry Belanger reportedly found Sunday was a bombshell in the literal sense, reports TV station WWAY.

“We look for sea shells. Sea shells and shark teeth,” Patti Belanger told WWAY. “I looked down into about 6 inches of water and I thought, ‘What is that?’.. It literally looked like a big bullet. I wasn’t going to let it go.”

Belanger and her husband Kerry carried the shell home and posted a photo Monday afternoon on the Kure Beach Pier Facebook group, seeking help. “This washed up in the surf yesterday. Any information is appreciated,” she posted with the photo.

This is the 12-inch shell the couple found in the sand at Kure Beach this week. (Photo: FACEBOOK SCREENSHOT)

More than 200 people responded to the post, many with warnings that the couple needed to call the Kure Beach Police — and a bomb squad and consider vacating the premises.

What they had found was likely a Civil War shell, with ties to the battle of nearby Fort Fisher,multiple commenters said. Many responders said they, too, had found bombs and bullets on area beaches, but none quite that old.

Patti Belanger has since posted a series of updates, noting the couple contacted police and a bomb squad did, in fact, come to the house.

Experts corroborated that the bomb is of the Civil War era, and likely belonged to the Union Army, she wrote.

“The shell we found was indeed live (full of black powder),” Belanger posted.

Authorities detonated it safely, she said, and then returned the pieces with advice on how to restore the shell back to its original appearance.

“My husband and I have donated the 30 pound Parrot Shell to the North Carolina Department of Natural and Cultural Resources, Underwater Archaeology Branch,” she announced in a “final update.”

“It will take between six months to a year for the restoration process to be complete. We are requesting that it stay here at Fort Fisher since this is our home now. (However, no promises were made).”

The couple hope to see the shell on display, she said.

Discoveries of missiles, mines and bombs are becoming increasingly common on North Carolina’s beaches, which were the scenes of both battles and training exercises in decades past. In many cases, the discoveries require beaches to be evacuated until experts can clear the danger.

In November, the National Park Service posted a photo on Facebook of a well-rusted mine that washed up at Cape Hatteras National Seashore near Salvo.