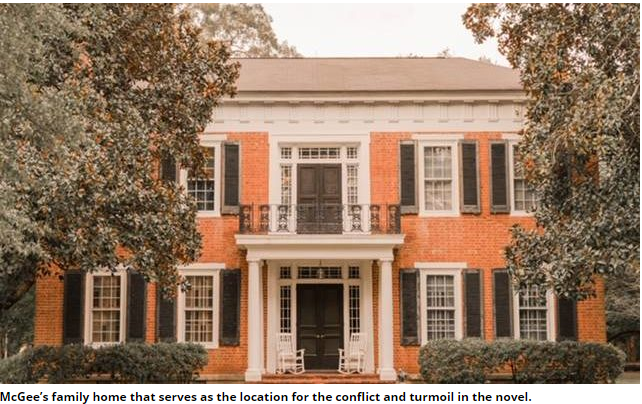 ROCKINGHAM, Va. — Local author Sam McGee’s new book, “Cartledge Creek,” is based on the lives of his Civil War-era ancestors in Richmond County and their experiences during the war.

It’s a historical fiction novel that follows McGee’s great-great-great grandfather, General Alfred Dockery, an advocate of black suffrage and one of the founders of the North Carolina public education system. Dockery was also the owner of a plantation with one of Richmond County’s largest concentration of slaves, and had multiple sons fighting for the Confederacy.

McGee said one of the main conflicts in the novel is the unusual and contradictory position that his ancestors found themselves in, who were divided among many different fault lines.

“It’s easy when you look past at history to sort of assume that everybody was absolutely and unquestionably firmly in that camp or that camp,” McGee said. “But, just like in modern times, things are more complicated than that.”

Another key character is Jim Dockery, the son of Alfred, who finds himself in some of the bloodiest conflicts of the war fighting for the Confederacy. Dockery fought as north as Gettysburg and found himself in two of the worst Union prison camps in the war, Point Lookout in Maryland and Elmira in New York.

“It’s a real challenge knowing that I’m talking about real people and my own ancestors,” McGee said. “You want to be true to the story as much as you can. A lot of this you have to take the story and historical facts that you know, and then it’s just necessary to, in some places, fill in the gaps and tie the story together. On the one hand, it’s a big challenge, on the other hand, it’s the fun part of being a writer.”

The bulk of the research for the novel served to verify what McGee has heard his family talking about his entire life. As a teenager, he would take notes of the stories that his families would tell.

“I wanted to make sure I was ready to tell the story,” McGee said. “Earlier in my life, I knew it was something I was going to one day do.”

McGee said he felt a responsibility not just to his ancestors, but to the future generations who will read this story based on true events.

“I didn’t want to simply glorify my ancestors,” McGee said. “I wanted to tell the whole story the best I could.”

McGee said the most fascinating thing was finding pieces of information in historical records that verified a statement that his grandmother had told him as a child. An example was a story of his great-great-great uncle being seen climbing over a wall at Fort Fisher near Wilmington to engage in hand-to-hand combat.

The author was able to find his ancestor’s regiment and pinpoint where he was stationed on that particular day of war. McGee concluded that it made perfect sense that his family member would have been engaged in that skirmish.

The Richmond County portion of the book is based on a family home of McGee near Cartledge Creek Baptist Church. It’s located between Ellerbe and Rockingham.

McGee purchased the home along with his wife in 2006, after it had been sold outside the family in the 1980’s. It had always been a dream of his to bring the home back within his family.

It took about five to six years to complete the novel, with McGee raising his children and working as a trial lawyer during the writing process.

McGee said he plans to host a to-be-determined event in Richmond County to talk about the book and sign some copies.

“The action in this book happens over a wide geographical area, in Mississippi, New York, Pennsylvania, Maryland, Virginia,” McGee said. “There’s still a good deal of Richmond County history in this book. I think it’s great when you can some of that local history put into novel form.”

To support the Richmond County Daily Journal, subscribe at https://www.yourdailyjournal.com/subscribe.