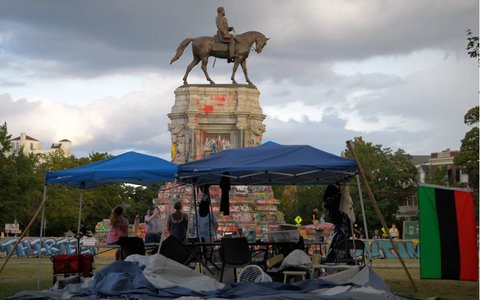 RICHMOND — Janice Nuckolls considers herself a liberal Democrat, believes Black lives matter and has a “We Stand With You” sign in her front window facing the daily demonstrations along this city’s Monument Avenue. 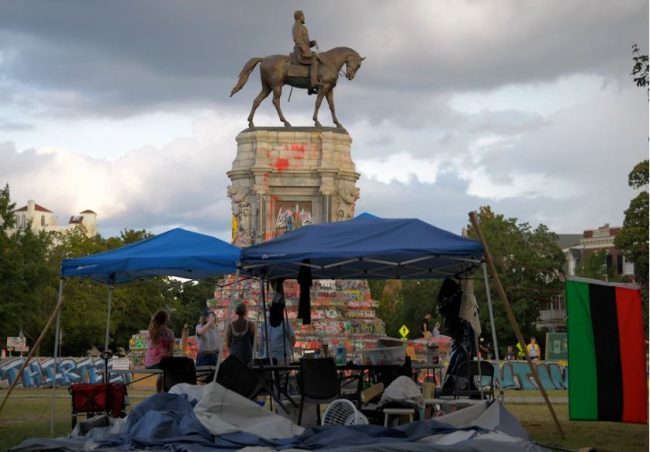 Tents are set up across the circle surrounding the Robert E. Lee statue in July to give out free food and drinks to visitors. (John McDonnell/The Washington Post)

But a resurgence of violence and vandalism as the protests drag into their third month has left her and some other residents weary and frustrated.

“I have been very sympathetic to [fighting] injustice and inequality, but it seems like right now the protesting and the destruction of private property has nothing to do with any of that,” Nuckolls said Wednesday.

A wave of violence hit Richmond on Tuesday night as some among a group of about 50 protesters vandalized downtown businesses and smashed windows at the city’s John Marshall Courthouse, causing what Mayor Levar Stoney said was hundreds of thousands of dollars in damage.

Across town on Monument Avenue, which has been the focal point of round-the-clock demonstrations because of its procession of Confederate memorials, city officials and police cleared out a protester encampment Wednesday morning and removed signs and other markers left on city property.

While Stoney blamed the recent destruction on a small band of people looking to disrupt a legitimate protest movement, some residents say the relentless weeks of demonstrations are taking a toll.

“Regular citizens [feel] caught in the middle,” said Charlie Diradour, a Monument Avenue resident, adding that he wants to see an end to police brutality and racial injustice but is fed up with violent protests.

Almost every night since May 30, demonstrators have occupied the traffic circle around the statue of Confederate Gen. Robert E. Lee outside the home where Nuckolls and her husband have lived for 25 years. The early thrill of marches and chanting has given way to dread, she said. Guns have become a common sight. People relieve themselves in yards and alleyways.

Her husband tried to tell some of the protesters that he appreciates the cause, but that, “you know, we’re trying to sleep,” said Nuckolls, 63, who is White. “And the response was, ‘No justice, no peace.’ ”

That refrain of the racial justice protest movement, ignited in May after the police killing of George Floyd in Minneapolis, has put Richmond residents to the test. Protesters say the point of showing up day after day is to continue to focus attention on racial inequalities, including police violence against African Americans.

“I appreciate that the protesters wanted to be heard, but something happens in the hearts and minds of people when they are threatened with violence. They stop thinking. They stop listening,” said Carol A.O. Wolf, a former Richmond School Board member who is White. The longtime city resident said she is a Quaker who believes in nonviolence as a tenet of her faith.

Stoney alleged Wednesday that the violence is aimed at weakening public support. Four people were arrested after Tuesday night’s incidents, and the courthouse remained closed the next day.

That outburst came on the heels of another spasm of violence two weeks ago, when demonstrators clashed with police and burned a city work truck and two dumpsters. Nearly two dozen people were arrested after those events, breaking a streak of more than three weeks of primarily peaceful demonstrations.

Stoney blamed that earlier violence on outside agitators without producing evidence to back the claim. On Wednesday, he did not mention outsiders but insisted that the mayhem was the work of saboteurs.

“They were not about BLM or anything of the sort,” Stoney, who is African American, said during a news conference. “I refuse to paint the entire racial reckoning movement as violent protesters. This is a small group of individuals who were bent on violence last night and we’re going to do everything we can to not only investigate, but also to arrest those individuals.”

Some of the heat had seemed to bleed out of the protest movement last month after Stoney ordered three of the Confederate statues removed from city property on Monument Avenue. A fourth was pulled down by protesters, leaving only Lee still standing — occupying ground owned by the state.

While Gov. Ralph Northam (D) has ordered the Lee statue removed, a small group of homeowners filed suit to save the monument, and the case is tied up in court.

For a time, the symbolic victory over the statues turned the protests into voter registration drives, art installations and gospel concerts. But as the weeks dragged on, crowds thinned, and some say the tenor became more menacing.

Images on social media have shown White men appearing with guns near the statues. Black protesters armed themselves in response. One group took up permanent residence in a small park next to the Lee circle, with tents and barbecue grills.

While the Monument Avenue Preservation Society officially endorsed removing the statues, reports of gunfire and damage to property began to wear down support for the movement in the neighborhood, which contains some of Richmond’s finest old homes as well as apartment buildings housing college students.

“This movement started to take the statues down and many of us — I would say a majority of us who live on Monument Avenue — were completely down with that movement, all up until they started breaking s—,” said Diradour, 56, who is White. “And that was a bridge too far for many of us. Because what does it benefit society to have the right to have your voice heard if your next move is to break a window of the Omni Hotel, the John Marshall court building?”

The city has begun to move away from its look-the-other-way response to encampments near the Lee statue. On Wednesday morning, police and city work crews cleared out the tents and surrounded the park with orange plastic fencing and no-trespassing signs.

Two city police cars sat nearby, in case the campers tried to return. Workers also took down historical markers that had been erected in median strips by a group looking to put the monuments into proper context, with messages about slavery and Jim Crow laws.

Cory Webb, 35, a protester who had lived in the encampment for weeks, said the demonstrators only brought guns for ­self-defense. But he insisted that they got rid of their weapons some time ago.

Shirtless in the heat as rain began to fall at the base of the Lee statue, Webb, who is Black, said his group had occupied the park for benign purposes: to feed protesters and the homeless, and to draw attention to the plight of those who have been left behind by capitalism and systemic racism.

“This is not terrorism,” he said.

Inside the Lee circle, which is state property, protest signs remained — along with a garden planted by demonstrators and three basketball hoops.

Asked if the state intends to clear the space, a spokeswoman for Northam noted that some tents and other items have been removed. “Capitol Police continue to monitor the area for the safety of all who gather and those who live nearby,” spokeswoman Alena Yarmosky said via email. “I would note that State Police have been there previously but are in a support role only, and respond only when requested by the Richmond Police.”

But for residents such as ­Nuckolls, city and state officials have not done enough.

Tuesday night, she said, motorcycles roared through at midnight and again after 3 a.m. She and her husband use a large fan to create white noise to give them a chance to sleep. Their garage has been spray-painted, she said, and people have come into her yard with guns and to urinate. A couple renting a room on their property left in frustration, she said.

“I live and work in this house and I no longer have the quiet enjoyment of my home,” she said. “The protesters have no sympathy for me. They say, ‘You’ve had 100 years here. Your time is now over.’ ”