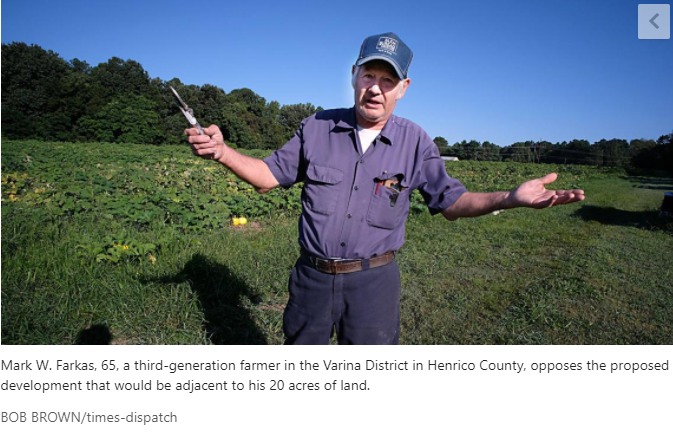 VARINA DISTRICT, Va. — Developers of a long-planned residential project are returning to Henrico County officials for permission to build more homes, but some residents want to halt the project altogether, citing concerns over a historical battleground and an aquifer.

Set to become the Ridings at Warner Farm, the subdivision of 770 homes would be built on nearly 420 acres in the Varina District, located about a mile east of Interstate 295 and state Route 5. The developers’ request to boost the project from 650 single-family homes and town houses to 770 is slated to go before the county Planning Commission on Thursday.

“We’re gonna lose two major historical sites … that are very significant and we can never get back,” said Aileen Rivera, a Varina District resident and member of the Route 5 Corridor Coalition and the Varina Beautification Committee, neither of which supports the proposed development.

At issue is the project’s potential impact on the Camp Holly Springs aquifer and the Civil War battlefield of New Market Heights, where 14 members of the U.S. Colored Troops earned the Medal of Honor for valor in an attack on Confederate forces.

While developer D.R. Horton says its requested rezoning “decreases the geographical footprint,” citizens continue to push back. In an emailed response sent through an attorney, the company said that studies aimed at preserving historic sites were conducted during the initial zoning request.

“The requested re-zoning decreases the geographic footprint of the development and continues to preserve those areas previously identified,” the developers wrote.

D.R. Horton, a home construction company headquartered in Texas, took over the project after the death of Bob Atack of Atack Properties, which went before the commission in 2012 to secure approval for 650 homes. D.R. Horton removed a planned commercial component of the project in its request boosting the number of homes to 770, converting that space into parks and open areas for the county.

“We don’t believe adding 120 units will be a benefit to anyone but the developer,” said Roland “Dusty” Dowdy, president and general manager of Camp Holly Springs, a bottler of natural spring water.

Camp Holly Springs, which has been in business for almost 100 years, has an aquifer on site. The aquifer is near the proposed development, and Dowdy fears it could be damaged by construction. He has fought efforts to develop the area since at least the 1990s.

“Our concern for the area is that the natural resource, the aquifer we have, is not destroyed,” he said.

Developers said water quality could be improved in the area through expanding public facilities such as sanitary sewer and municipal water systems.

Improper development could cause sewage waste to leak into the groundwater or a hole could form in the aquifer, Dowdy said. If the aquifer is polluted, first the source of pollution would need to be stopped, and then the aquifer would have to be kept out of use for a number of years to allow it to clear up.

“It’s my desire as a steward of the aquifer for it to continue. I want it to still be going long after my family is no longer going,” Dowdy said.

While the planning staff wrote that the request “could be appropriate,” there are several concerns including development features and “upholding the quality” of the 2012 request, which included donating some of the land to the county to be turned into parks and having at least 650 homes in the development. If D.R. Horton addresses the concerns, the planning staff “could support” the updated request, because it provides new housing options and additional preservation of historical and environmental features.

Several years ago, Atack Properties donated 87 acres to Henrico County, including the New Market Heights Civil War battle site. D.R. Horton is honoring the donation, stating 360 acres of the proposed 420 acres would be preserved for open space and parks, according to the project’s website.

Mark Perreault, vice chairman of the Shenandoah Valley Battlefield Foundation, said in an interview: “This is the most sacred ground to the United States Colored Troops. It is a great oversight of the nation in the battlefield preservation movement that we did not preserve this long ago.”

Developers could give up the contract and let conservationists purchase the land, said Perreault, who added that the Capital Region Land Conservancy and the American Battlefield Trust have expressed interest in buying the property for conservation if D.R. Horton steps aside. Perreault and his wife have leased some land and an old house near the Ridings site and sold other land in the area to conservationists. He also bought land from the Dowdy family.

According to the project’s website, D.R. Horton is slated to begin the first phase of construction of 67 homes in the spring of 2022 and to complete the entire development eight years from then.