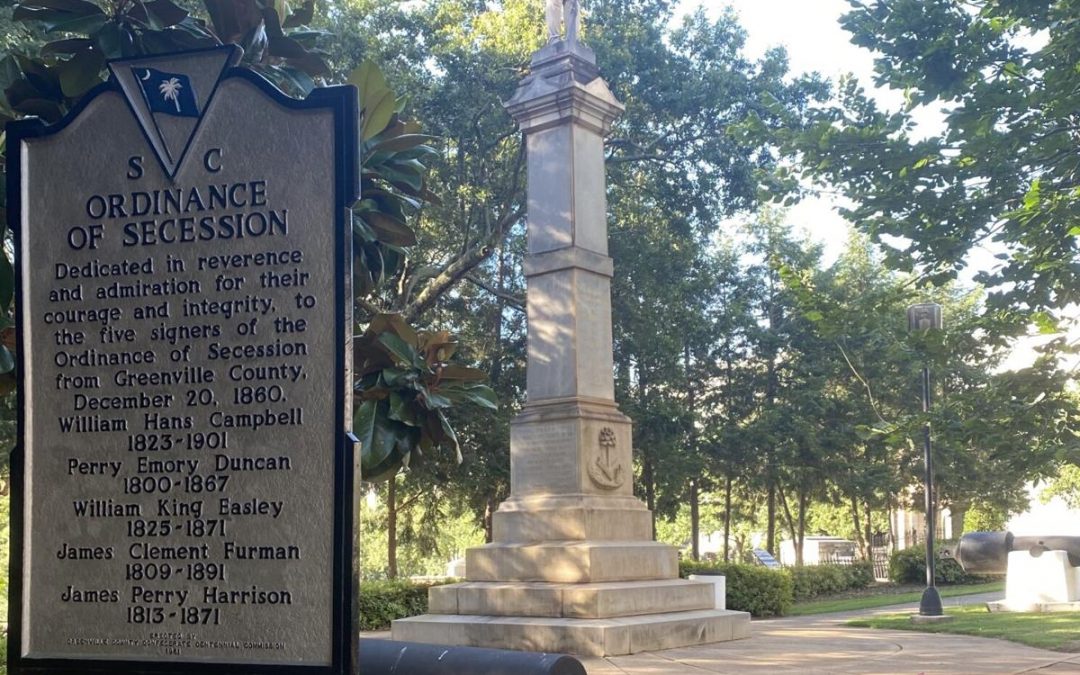 GREENVILLE, S.C. — The leader of an activist group engaged in a summer-long protest against a Confederate statue in downtown Greenville claims a compromise has been reached with the city to move the monument.

What would have been another weekend of protest downtown, with fears of an escalation of assault rifles as the backdrop, is now suspended. Bruce Wilson, who under the banner of Black Lives Matter has led protests over the statue dating back three years, said that the suspension is in response to a deal.

“For the most part, that’s the only reason,” Wilson told The Post and Courier on Wednesday. “But they’re going to have to follow up real soon or we’re going to be back out there.”

The compromise to move the statue from its current spot just off North Main Street to inside the gates of the Springwood Cemetery among Confederate graves was shared publicly by Wilson in a Facebook Live video, with County Councilman Ennis Fant explaining the deal.

In an interview on Wednesday, Fant told The Post and Courier that while he tries not to interfere in city matters, he became concerned after men armed with assault rifles and dressed in tactical gear stood during the duration of the Aug. 1 protest during which Black Lives Matter activists and Confederate statue defenders clashed.

Fant said he met with Mayor Knox White at the monument last week to discuss possibilities amid fears that escalating tensions could end in gun violence.

“When I saw people with long-barrel rifles on Main Street in public, that concerned me,” Fant said. “I don’t think it’s a good idea to have guns at protests.”

The mayor told The Post and Courier on Wednesday that moving the monument is on the table.

White said the city is “looking at that and other options,” and he cited an oft-used statement that the City Council intends to address the Confederate statue in a “deliberative” way.

“They all want a thoughtful and deliberate process,” White said. “What is true is that people of all points of view have reached out and made helpful suggestions.”

The monument, which includes the statue of a Confederate soldier along with inscriptions honoring Gen. Robert E. Lee and presenting the “Lost Cause” narrative, has been at issue since August 2017, when protesters and monument defenders bearing Confederate flags were separated by police.

That protest was following violence associated with a white supremacist rally in Charlottesville, Va., over removal of a Lee statue.

In response at the time, White promised that a plaque of some sort would be erected to “contextualize” the monument to speak to how the Confederate uprising against the Union had preservation of slavery as part of its fundamental aim.

Following a summer of protest over the police-involved death of George Floyd in Minneapolis, demonstrations against the downtown monument have heated up.

It reached a boiling two Saturdays ago when protesters and defenders clashed and men armed with assault rifles and dressed in tactical military gear stood watch.

The presence of men with semiautomatic AR-15 rifles slung around their shoulders alarmed city police and elected officials. It caught Fant’s attention and prompted him to get involved.

This past weekend during a protest march downtown over the death of Breonna Taylor — who was killed in a botched police raid in Louisville, Ky. — Wilson said that if the militiamen showed up with guns he would have his own group “also exercising their Second Amendment right” to escort him in a show of refusal to be intimidated.

In interviews with The Post and Courier last week, supporters of the right to open carry rifles at protests said they are exercising an essential role of maintaining peace prescribed by the Founding Fathers.

They said that their presence sends a signal that law and order must be kept, including preventing damage to the monument, among other aims.

The city has been working behind the scenes to strike a deal. As is the case with so many efforts to move or alter Confederate monuments across South Carolina, the state’s Heritage Act prevents it, barring a two-thirds vote by the Legislature allowing it. The John C. Calhoun statue that towered over Marion Square in downtown Charleston didn’t require state approval because it was private property. Greenville’s monument is city-owned and maintained.

The Greenville monument, which was erected in 1892 and moved in 1922 from the middle of the busiest portion of North Main Street to its current spot in a tree-shaded pocket park a block north, is on property owned by the city.

Perhaps most importantly, it’s on property that is part of the Springwood Cemetery.

White said that he believes the monument could be moved further within the cemetery, where supporters from time to time plant flags honoring the graves of Confederate veterans. The city would have to seek a waiver from the state. Wilson said he wants the city to act as the waiver is pending. He said he wants the statue moved before October.

“We don’t want it to be behind closed doors and they do nothing and it be like it was three years ago,” he said.

The movement of the statue, which would be oriented to face the Confederate graves, has more support than in previous waves of protest, Fant said.

“That’s our hope, but that decision is totally left up to the deliberative process of City Council,” Fant said. “I think there’s a public sentiment that something needs to be done beyond the African-American community, and that’s not something we’ve seen before.”