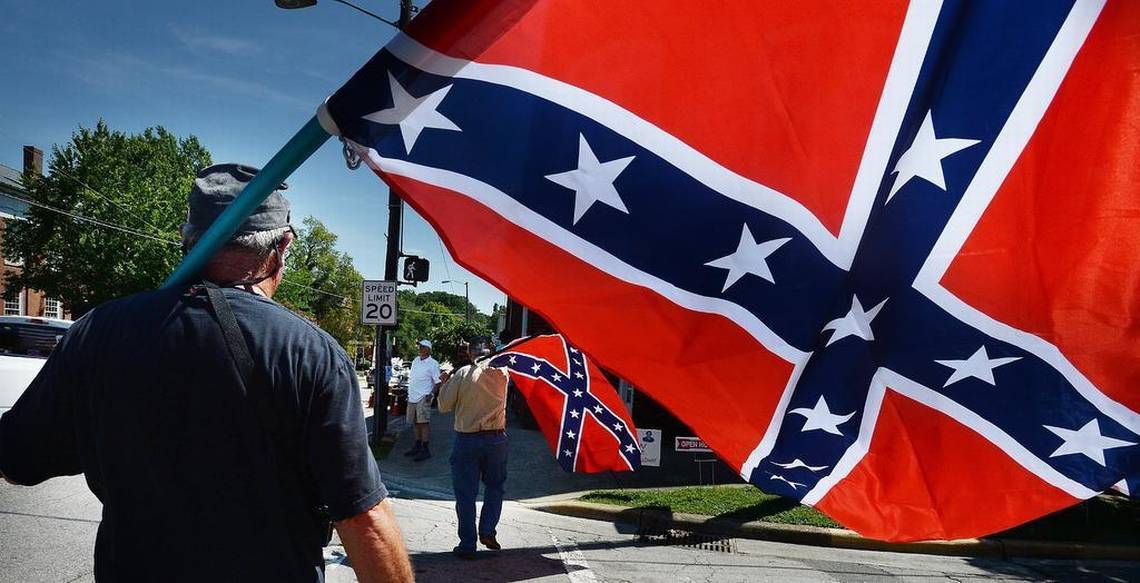 HILLSBOROUGH, N.C. — A local chocolate maker’s response to Confederate flag bearers has police and town leaders concerned about a greater risk for violence.

On July 27, Matthew Shepherd, who owns Matthew’s Chocolates, at 104 N. Churton St., encountered a pro-Confederate demonstration about 100 feet from his shop’s front door. As he walked past, rolling his eyes, one of them turned to him, saying, “boy in the pink shirt, why don’t you go back to your chocolate shop,” he said in an interview Monday.

He also has heard from customers concerned about crossing the street to his shop and insults directed at other people, Shepherd said.

When he called the police, he was told the protesters have a right to free speech. So he launched his own counter-protest, changing a chalkboard sign outside his shop to read: “Burn a Rebel Flag … Get a Free Chocolate!”

Police officers did go into the shop and advised Shepherd he shouldn’t put out the sign, Hampton said.

The sign went viral when three men with the Confederate group posted a photo of themselves behind the sign on social media, evoking angry responses nationwide and overwhelming the shop’s Facebook page and Yelp review site. Shepherd said he got “many, many death threats.”

“I just went upstairs and sat in the office,” he said. “I was like, well, so much for a little joke for the locals.”

Steve Marley, one of the Confederate flag bearers, said Tuesday that Shepherd approached them after interacting with counterprotesters across the street. He said, “Why don’t y’all get some education,” Marley said, and he told Shepherd, “I have some education, thank you.” Shepherd made a rude gesture, and police arrived shortly, he said.

Marley said he also got death threats; he shared a Facebook message from a man asking how much chocolate he could get if he burned the flag bearers, too.

“There’s three reasons why we stand on that corner,” he said. “For our ancestors that was killed during the Civil War and our heritage; the second reason is for Silent Sam, (because) Silent Sam was torn down illegally; and the other is the (Orange County) flag ordinance and our rights being suppressed.”

The controversy has the police concerned.

“These things do create a lot of concern, because they can spiral out of control so quickly,” Hillsborough Police Chief Duane Hampton said Monday. The department wants to balance public safety with constitutionally protected free speech, he said.

Hillsborough Mayor Tom Stevens, while noting “the Confederate flag has been used for over a century to intimidate and oppress persons of color,” agreed.

“Certainly, given the tragedies that we’ve seen in this country just in the last 24 hours, we don’t want something like that to erupt,” Stevens said. “The town, we’re trying to do what we can to keep the peace and keep people safe.”

A handful of people carrying flags have targeted Hillsborough for a few years in large part because of steps taken to limit Confederate flags and symbols in the county and towns, and a ban against divisive symbols like the Confederate battle flag in the Orange County Schools dress code. While it’s not a group-sanctioned event, some of the flag bearers are affiliated with the pro-Confederate group Alamance County Taking Back Alamance County.

Their weekend protests, held several times in the past year, have drawn counterprotests from Orange County residents who stake out the opposite side of the street with signs protesting hate and white supremacy. Each group has called out the other online, posting photos and videos. Some of the rhetoric has suggested taking violent action against local progressive leaders.

A Facebook post from a friend of Shepherd exacerbated the incident Aug. 2 by alleging Hillsborough police used a slur against Shepherd. Police did not use the slur, Shepherd said, and he asked the friend to take it down immediately.

“The accusation that the police acted inappropriately, particularly with a homophobic slur, was completely unwarranted and without merit,” Stevens said. “In fact, our police deserve kudos. They take threats that people get very seriously. They take community safety for all parties very seriously, including the protection of people’s constitutional rights.”

Police have since stepped up patrols around the shop and offered to escort staff to and from the building, Hampton said. Orange County Sheriff’s Office deputies are keeping an eye on Shepherd’s home, he said. They are investigating the threats, Shepherd said.

On Saturday, the department posted five extra officers downtown at a rally in support of Matthew’s Chocolates. Police were there to maintain the peace and ensure protesters didn’t block the sidewalk or streets, Hampton said. He advised ignoring the flag bearers.

“Let them have their voice and go on,” Hampton said. “They want conflict. These groups want folks to give them attention.”

About 50 people showed up for Saturday’s rally, said Caity McArthur, a member of Hillsborough Progressives Taking Action. The national tension around race and white supremacy seem to be increasing the number of pro-Confederate actions locally, she said.

“On a larger scale, we’ve been coming downtown because we as a community stand against these displays of hate and intimidation, and we don’t think that members of hate groups should be able to come onto the streets of downtown, block sidewalks and try to intimidate our community members,” McArthur said.

He understands why people are upset, Marley said, but hate is not their purpose.

“People have the right to be upset (about) what we do — that’s their right — but it stops, there’s a line drawn,” he said. “You cannot assault or harass us. There’s no clause in the First Amendment that says everybody has a right for freedom of speech except the ones you disagree with or (if your) feelings are hurt.”

The rally was a boon for business at Matthew’s Chocolates, where the line of customers stretched down the sidewalk. Supporters on both sides of Churton Street waved American and rainbow flags, listened to music, and chatted while holding up signs against hate.

Former Chapel Hill resident Jeremy Boomhower said he decided “to bring some joy” to the event. He wore a rainbow-colored tutu and leg warmers while playing a tuba alongside other members of his band.

Shepherd’s sign wasn’t the best idea, but it also wasn’t “too out of line,” Boomhower said.

“It was snarky. It pushed a few buttons,” he said. “But it’s nothing worse than that (Cherokee Guns) billboard in western North Carolina with the four congresswomen … calling them idiots.”

Shepherd closed his shop Sunday, because there was nothing left to sell.

Summer is usually slow, and sidewalk construction two years ago cost him thousands of dollars, Shepherd has said. He had to close for two months this summer after losing his kitchen space in another location. His new space across Churton Street has room for a kitchen and a future expansion, he said.

Saturday’s extra business will let him catch up on bills and put him in a good place financially, Shepherd said.

“It was embarrassing. It was wonderful. I’m kind of beside myself with it all,” Shepherd said. “I certainly did not mean to draw attention to myself for sales, but it really shows me the support of downtown. I’ve been sleeping fine at night.”