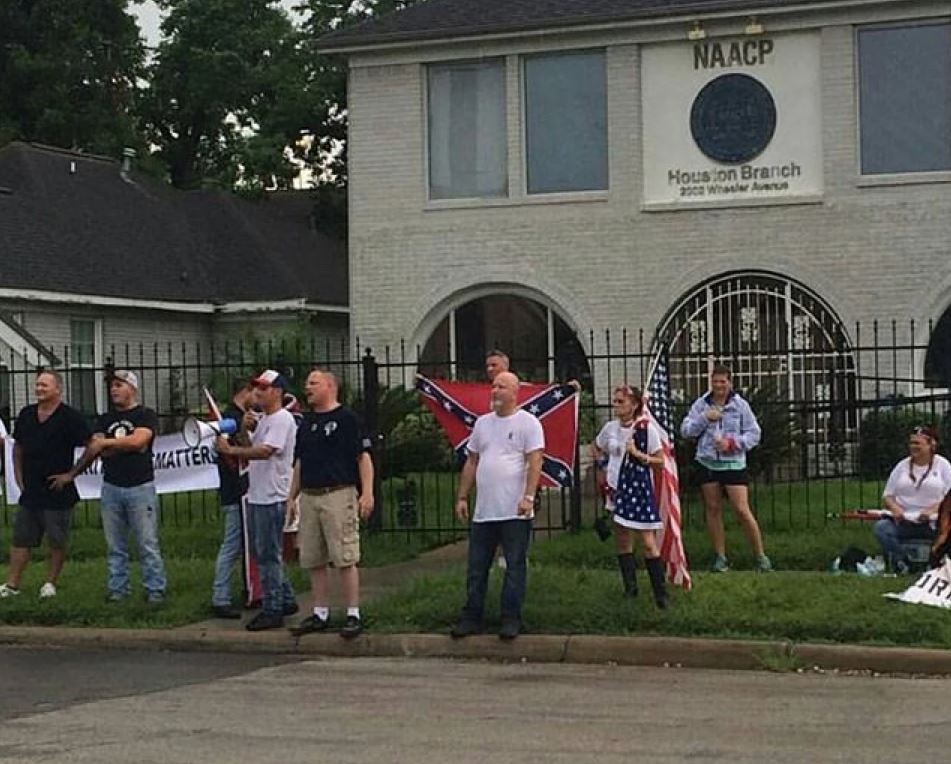 HOUSTON — White Lives Matter staged a rally outside the NAACP’s Houston headquarters on Sunday, sparking controversy and counterprotests in a city where racial tensions remain high after a string of recent incidents.

“We came out here specifically today to protest against the NAACP and their failure in speaking out against the atrocities that organizations like Black Lives Matter and other pro-black organizations have caused the attack and killing of white police officers, the burning down of cities and things of that nature,” organizer Ken Reed told the Houston Chronicle. “If they’re going to be a civil rights organization and defend their people, they also need to hold their people accountable.” 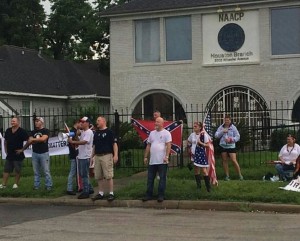 Reed, who was wearing a “Donald Trump ’16” hat and a “White Lives Matter” shirt with white supremacist symbols, said protesters were “not out here to instigate or start any problems,” despite the weaponry and body armor on display.

“Obviously we are exercising our Second Amendment rights but that’s because we have to defend ourselves,” he told the Chronicle. “Their organizations and their people are shooting people based on the color of their skin. We’re not.”

Reed appeared to be referring to attacks targeting white police officers in Dallas and Baton Rouge last month, which were carried out by lone gunmen espousing black nationalist beliefs. (In Dallas a Latino officer was killed and in Baton Rouge, an African American officer was killed). Both Black Lives Matter and the NAACP denounced the attacks.

As police arrived and set up barricades around the White Lives Matter protesters, locals stood across the street. Some shouted, while others shook their heads in disbelief that Confederate flags were flying in front of an NAACP office in a black neighborhood.

“It’s a physical manifestation of white supremacy, white privilege and racism being protected by this country,” a black female counterprotester told KPRC2.

The White Lives Matter protest comes at a tense time for Houston and the country. On July 9, Houston police fatally shot a black man who they said pointed a gun at officers. The shooting, which came the same week as fatal police shootings of two other black men, one in Baton Rouge and another in Falcon Heights, Minn., prompted criticism from Black Lives Matter activists. The Houston shooting came two days after the attack on Dallas police.

Several other incidents in the city have raised racial tensions even further. At the University of Houston, the vice president of the Student Government Association was sanctioned after she wrote “Forget #BlackLivesMatter … More like AllLivesMatter” on Facebook shortly after the Dallas attack.

Earlier this month, authorities released video showing an African American woman calling 911 and sayingshe was “really afraid” of a white cop who had pulled her over. The woman was then violently arrested, although the officer was cleared of wrongdoing.

[A black woman called 911 because she was afraid of a police officer. A violent arrest followed.]

In May, city officials voted to rename seven schools named after people with ties to the Confederacy, including Robert E. Lee, Thomas “Stonewall” Jackson and Jefferson Davis.

Last year, the University of Texas announced it was removing a statue of Davis from its campus in Austin, about 160 miles west of Houston.

Sunday’s rally was not the nation’s first White Lives Matter gathering. Others have drawn similarly small crowds, such as a July 30 protest in Buffalo that was organized by neo-Nazis and also was dwarfed by counterprotests.

Comments by the White Lives Matter protesters Sunday also seemed to echo opposition to the removal of the Confederate flag from the grounds of the South Carolina statehouse last summer. The flag was taken down after avowed white supremacist Dylann Roof allegedly killed nine African Americans at a church in Charleston.

“It has nothing to do with racism on our part,” Reed told the Chronicle in reference to the Confederate flags on display at Sunday’s protest. “We’re proud to be Southern. It has all to do about heritage, nothing to do with hate.”

In videos posted online by local news outlets, bystanders and counterprotesters, Reed appeared to be the leader of the demonstration.

He had appeared on television the day before to promote the rally.

“Attacks on white officers, the calling for the murder of white officers, the burning down of cities, the stopping of traffic in streets,” Reed told Fox26. “A cop or ambulance could be trying to take someone to the hospital where a matter of minutes matters, and [Black Lives Matter protesters] are stopping them from going. The NAACP is not speaking out against this and if you aren’t speaking out against it you are, in our eyes, condoning it.”

Whites were under attack, he claimed.

“We’re being told that it’s bad to be white,” he told the television station. “Every other race is encouraged to promote their heritage and culture, but as soon as a white person does it they are labeled as evil or racist.”

On Sunday, he stood out front of the NAACP office on Wheeler Avenue with a bullhorn.

“White Lives Matter refuses to feel any white guilt,” he shouted, according to a KPRC2 video.

Reed said he thought whites were receiving unequal treatment and had been drowned out by Black Lives Matter.

Other protesters were even more blunt.

“We came here because the NAACP headquarters is here and that’s one of the most racist — supposedly ‘civil rights’ — groups in America,” said Scott Lacy, who could be seen waving a Confederate flag.

“It seems like in the country today that it’s wrong to be white,” fellow protester Billy Gaston told KPRC2.

One sign simply read “14 words,” a reference to the white supremacist motto: “We must secure the existence of our people and a future for white children.”

The protest struck many in the neighborhood as nonsensical and offensive.

“When he says ‘equal rights,’ that’s what we are trying to say. Let’s have equal rights. We’ve been saying that for years as black people,” she told the Chronicle.

And whatever message White Lives Matter might have had, it was obscured by the symbols on display, Richardson said.

Adding to the tension were the assault-style rifles, which could be seen slung over the shoulders of at least two women and one man during the protest. Several protesters also wore body armor.

Some locals said they felt like the White Lives Matter crowd had descended on Houston with no intention of holding a dialogue.

Brandon Walker, a reporter for the TV station, also said that there was little communication between groups literally on either side of the street.

“Organizers of the White Lives Matter movement say they held this protest and were here to spark dialogue on both sides of the street,” he said. “Also, people who were here in response to the rally said they hoped to have some dialogue too. Neither side, though, said they were able to accomplish that. The rally ended before any conversation on either end of the street was slated to take place.”

It was much the same online, where there was lots of heated comments but little exchange of ideas.

Many poked fun at the protest.

Jerry Ford Jr., a Black Lives Matter activist who appeared alongside Reed on TV the day before, linked the protest to Republican presidential candidate Donald Trump.

Some White Lives Matter supporters, however, suggested the movement was a tit-for-tat response.

“Very few blacks were on board with All Lives Matter, so we are doing our own thing now,” wrote one on Twitter. “White Lives Matter.”

“We expect every race to be proud of who they are,” Reed said on Fox26. “We’re out there fighting for our rights just like everyone should.”

“Black Lives Matter is allowed. Why not White Lives Matter?” wrote one. “It’s either both of them or none of them. Pick one.”

Critics, however, said equating the two movements was absurd as it ignored centuries of slavery and institutionalized racism in America.

Perhaps the most powerful response came from Andre Smith, a young black man and the son of NAACP Houston’s executive director, Yolanda Smith.

“So this is what the Houston branch of the NAACP looked liked today,” he wrote under a photo of the protest posted on Instagram. “White supremacist protested with Confederate flags and banners that read ‘White lives matter.’

“Little did they know the executive director of this particular branch birthday was today, which so happens to be my mom. So we spent the day celebrating a black life that did matter and will continue to do great work at this place you protest! Thank you and try again! #blacklivesmatter #NAACP”