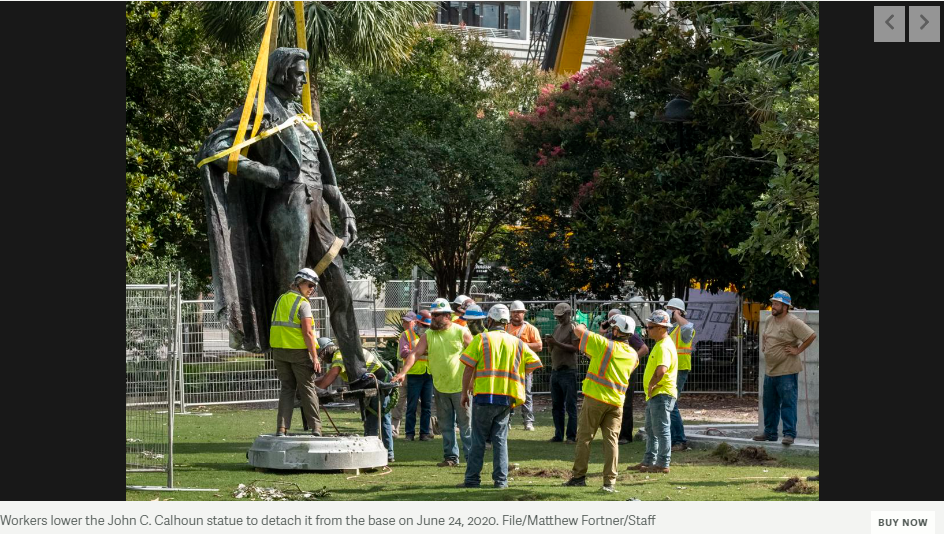 A pair of lawsuits opposing the removal of Confederate- and antebellum-themed monuments in Charleston were dropped this week.

The American Heritage Association helped fund one lawsuit filed by descendants of John C. Calhoun opposing the city removing his statue from Marion Square in 2020.

The AHA also filed a separate lawsuit opposing the removal of a Robert E. Lee Memorial Highway marker on Upper King Street, as well as the renaming of Memminger Auditorium to Festival Hall.

AHA President Brett Barry declined to comment on the status of the Calhoun case, despite the descendants’ request for dismissal. He said he would give further comment soon. The case could be filed again.

“Charleston monuments are an integral part of the city’s historical and artistic American landscape,” Barry told The Post and Courier. “Both the American Heritage Association and members of the Calhoun family look forward to commenting on the destruction of U.S. Vice President Calhoun’s monument and the associated lawsuit in the coming weeks.”When on display, the 125-year-old statue had depicted Calhoun, a congressman and vice president, atop a 115-foot pillar and pedestal. Calhoun died a decade before the formation of the Confederacy. He is also remembered as a strong defender of slavery, at one point delivering a speech calling it a “positive good.”

A Los Angeles-based art gallery requested to borrow the statue as a part of an exhibit that would display decommissioned monuments alongside contemporary art inspired by the figures and the time period. The potential loan of the statue to the California art exhibit was part of the legal argument against its removal. His descendants argued it was created with the intent that it would stay in South Carolina.

The city ultimately made a deal with the South Carolina State Museum to take the statue instead.

In the Lee and Memminger case, the AHA sued S.C. Attorney General Alan Wilson along with the city of Charleston, contending Wilson should have followed through on his threats to sue the city.

In a letter to Mayor John Tecklenburg, Wilson wrote in February the removal of the Robert E. Lee marker violated the state’s Heritage Act, which protects certain historic monuments. He said he would sue the city if it did not return the marker to its original location. So far, he has not filed any case against the city. The letter made no mention of Festival Hall.

The hall’s original namesake, Christopher Memminger, served as treasury secretary of the Confederacy. A staunch secessionist and advocate for slavery, Memminger also helped establish Charleston’s public school system. The auditorium, which is managed by Spoleto USA, has been referred to as Festival Hall since 2020.The stone-and-metal monument to Confederate Gen. Lee, was removed in July 2021 and placed in storage. The request originally came from campus officials and was later backed by the school district.

It was erected by the United Daughters of the Confederacy and donated to the school in 1947, the monument states. The thumb-shaped marker stands several feet tall and was one of several such markers that were placed on state roads during the middle part of the 20th century by the UDC.

The website Historic Columbia includes a description of that city’s Lee marker on Gervais Street that’s nearly identical to the one removed from the Charleston school.

It also has a description of why the marker is there.

“Through public monuments and educational programs, the UDC glorified the Confederacy, explained secession as a political act rather than a defense of slavery, and vilified the federal government’s empowerment of African Americans during Reconstruction,” the website states, adding the UDC in South Carolina celebrated the Confederacy by designating a series of roads “that crossed the state from Charleston to Greenville” to Lee.

At the time that the lawsuit was filed, city attorneys argued that the removal of the marker does not violate the Heritage Act and stuck by their position.

“As city attorneys have made clear from the start, there was never a violation of the Heritage Act,” Charleston city spokesman Jack O’Toole told The Post and Courier on Sept. 16. “And now that these lawsuits have been dropped, the city can start moving forward once again with plans for these historical items to be displayed in an appropriate public setting here in our state.”

Barry added that both cases can be taken up in court again, should Wilson, or anyone else, choose to file a lawsuit.

“The claim by the city that the Robert E. Lee memorial does not fall under the Heritage Act is laughable,” Barry said. “We voluntarily dismissed the case without prejudice.”

So far, no new cases on the matter have been filed.

“No decision has been made,” a spokesperson for Wilson told The Post and Courier when asked whether Wilson still plans to sue.